This Is Why You Get a Rash After Working Out 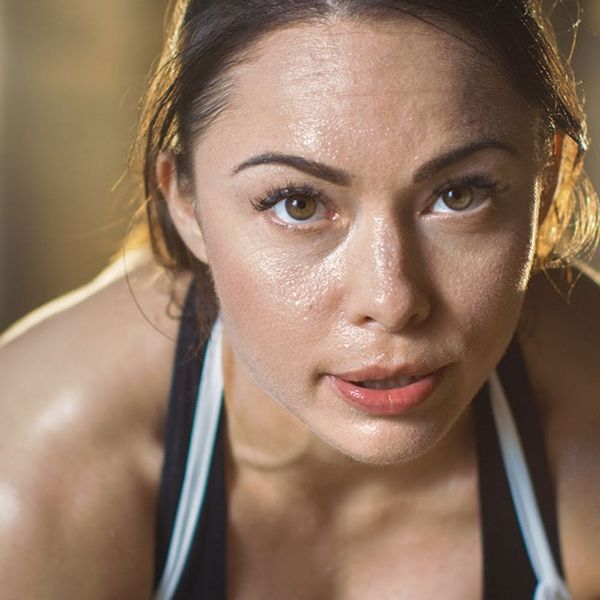 Despite what deodorant commercials would have us believe, sweat is definitely a good thing for your body (if not your favorite white T-shirt). If we didn’t sweat when working out, we would overheat in as little as 10 minutes. It’s when sweat evaporates from your skin that you get that cooling effect that keeps you functioning in the heat. However, some people experience a downside to sweat. If you’ve ever finished a hot workout or a spicy meal only to find yourself breaking out in an itchy rash, you’ve experienced a condition called cholinergic urticaria. But what is it, and what can we do about it? Don’t sweat it: We have your answers here.

What Is Cholinergic Urticaria?

Urticaria is the scientific name for hives, those red, itchy blotches you get when your skin reacts to something. In this case, it’s heat, specifically the sweat that comes with a sudden increase in your body or skin temperature. Dr. Kathleen Dass, MD, an allergist immunologist who practices in Oak Park, MI, says, “Cholinergic urticaria is also known as heat urticaria. It happens in response to active or passive body heating, for example through exercise, hot water, spicy foods, and even strong emotions such as anger.” Although there are different subcategories of the condition, in most people it’s caused by hypersensitivity to their own sweat. Talk about inconvenient!

It appears as a red rash anywhere on your body but most often on your face, chest, upper back, and/or arms. Dass explains, “Cholinergic urticaria leads to a very itchy rash, which can vary in wheal (meaning how red the hives are) and size, ranging from small dots to large plaques.” But it’s not the same as heat rash. “With heat rash, also known as miliaria, heat causes blocked sweat glands, and patients may develop itchy blisters or red bumps,” she clarifies. “The biggest difference is that miliaria tends to last for three to four days, whereas cholinergic urticaria should last less than 24 hours.” In most cases, it will clear up after an hour or so.

Who Gets Cholinergic Urticaria?

In an unusual health win for the over-30s, the age group most likely to have cholinergic urticaria are people aged 15 to 25. It’s actually pretty common among teens and young adults, with 10 to 20 percent of us experiencing a mild form. Fortunately, most cases remain mild, although Dass cautions that it can coincide with other types of urticaria and can occasionally be more serious. “Rarely, patients can have a severe allergic reaction called anaphylaxis, where more than one organ system is affected. It can also cause hypotension (low blood pressure), angioedema (swelling), and bronchospasm (which causes tightening of the airways in your lungs).” If that happens, get medical attention immediately.

How Do You Treat It?

Even the mild form can be very annoying — constant scratching is no one’s idea of a fun summer activity. “No one should have to suffer with this condition,” Dass says. As with most illnesses, prevention is the best cure. “The first step is to determine your trigger, such as exercising outdoors in hot weather, and avoid it,” she advises.“Beyond that, medical therapies include taking H1 antihistamines, such as hydroxyzine or cetirizine. If you don’t respond to that, patients have been successfully treated with omalizumab, a biologic therapy that blocks the allergic antibody.”

The good news is that you probably won’t have to worry about it forever. “It’s possible to age out of cholinergic urticaria,” Dass reassures us. “The average duration of symptoms is seven and a half years. One study reported that only 30 percent of patients still have symptoms after 10 years.” Another good reason to look forward to your 30s!

Do you have cholinergic urticaria? Let us know how you’re coping with it at @BritandCo.

Natasha Lavender
Natasha Lavender is a Londoner living in Chicago, and is fluent in British and American. She writes about pop culture, health, lifestyle, feminism, fashion, and interviews with interesting people, and has previously worked for Good Housekeeping magazine, Buzzfeed, and Hello Giggles. She loves podcasts, running, reading, dogs and cats equally, and peanut butter anything.
Fitness
Health
Fitness Healthy Living Womens Health