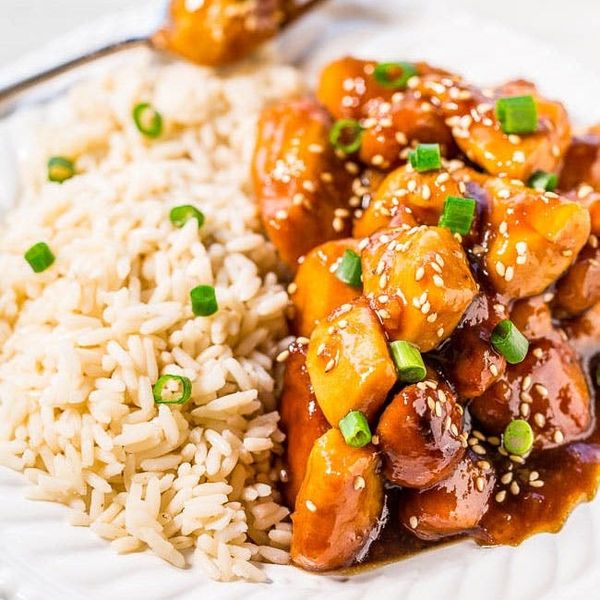 The robust flavors in cuisines from Thailand, China, Korea, Japan, India, Vietnam, and more translate well inside a slow cooker. Not only are the dishes convenient, but they can develop intense complexity from spices and meat simmering over several hours. These 14 slow-cooked Asian dishes are low on the labor but high on the flavor.
Pineapple Teriyaki Meatballs: Spaghetti, step aside. New meatball accompaniments are in town, and they're called teriyaki sauce, diced pineapple, and lots of rice. (via My Food Story)
Asian Pork Belly Burgers: Pork belly stars in these burgers. The meat is made tender in the slow cooker, simmered in a sweet and salty glaze, and stuffed into a bun with quick-pickled veggies. (via Kitchen Sanctuary)
Slow Cooker Asian Chicken Lettuce Wraps: A common complaint about slow-cooker meals is that they're too heavy. The solution? This hoisin-flavored chicken in fresh, crunchy lettuce leaves to add some balance. (via Well Plated)
Slow Cooker Asian Pork Ribs: Chinese five-spice powder instantly adds complex flavor to these pork ribs. Mix up a double batch of the Asian-influenced barbecue sauce; you'll want to slather it on everything. (via My Kitchen Love)
Slow Cooker Beef and Broccoli: On lazy days, the temptation to call for delivery is strong, but you can save big by staying in. Rely on this simple slow cooker recipe to get your fix of beef and broccoli, all without having to put on pants to answer the door. (via Well Plated)
Slow Cooker Cashew Chicken: Cashew chicken is even better when it's slow-cooked to fork-tender pieces. Serve with your favorite noodles or fluffy jasmine rice. (via The Cookie Rookie)
Thai Red Curry Chicken Soup: Peanut butter and red curry paste result in an addictive soup full of hearty textures and nutty spiciness. (via Foodie Crush)
Slow Cooker Orange Chicken: This healthier take on a classic involves no breading or frying — just a superb sauce flavored with orange marmalade, soy sauce, and sesame oil. (via Averie Cooks)
Slow Cooker Pork Ramen: This easy-to-achieve ramen (and that seductive jammy egg on top) means you don't have to leave the house for a killer, stick-to-your-ribs Japanese meal. (via Jelly Toast)
Slow Cooker Asian Short Ribs: Spend 10 minutes prepping, relax for seven or eight hours, and then enjoy what might be the most succulent beef short ribs you've ever tried. Use the meat all week in salads and rice bowls. (via Damn Delicious)
Slow Cooker Tom Kha Gai: This soup is at once refreshing and comforting. Lemongrass stalks, makrut lime leaves, and ginger root bring freshness to the dish, while chicken thighs and coconut milk add heartiness. (via Love & Olive Oil)
Slow Cooker Veggie Pho Broth: Save your veggie scraps and make a big batch of meatless pho broth. Anytime you get a craving for soup, just heat it up, add rice noodles, and serve with Thai basil, bean sprouts, and lime wedges. (via Hello Veggie)
Slow Cooker Chicken Tikka Masala: Time for an upgrade from Trader Joe's microwaveable (albeit delicious) chicken tikka masala. (via Spicy Southern Kitchen)
Basil Chicken in Coconut Curry Sauce: Searing chicken thighs before adding them to a creamy, spicy mixture of coconut milk and curry powder lends a deep flavor to this comforting dish, best served with rice or a big ol' slice of naan. (via The Food Charlatan)