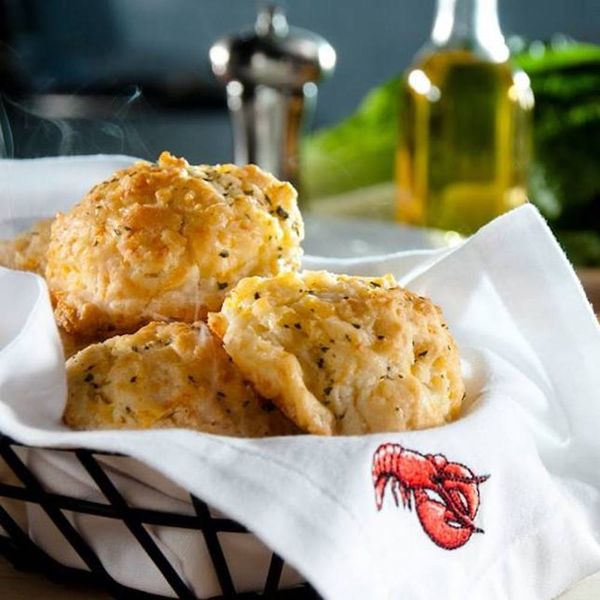 Anyone who’s ever been to Red Lobster can attest that though the seafood may be delicious, its Cheddar Bay Biscuits are the real star of the show. With their flaky, buttery-golden crust and cheddar-infused flavor, let’s just say that it’s a good thing they’re unlimited.

For the restaurant chain’s 25th anniversary, Red Lobster announced that those who sign up for its Fresh Catch Club email by 5pm EST on May 8 will be entered for a chance to be one of 250 lucky winners of its brand new Cheddar Bay Biscuit-flavored, er, lip balm. Yes, lip balm! Red Lobster is paying homage to the customer favorite with a beauty product (along with tees, magnets, and the like) that reportedly smells like butter mixed with… maple syrup?

The flavor also varies a bit from what you might expect. Refinery 29, who got a sneak peek at the product, called it a caramel popcorn taste.

They’re not the first to take their goods from dining to beauty shelves, either. Other food brands have also dipped into the lip balm game. Ben & Jerry’s Ice Cream has a Flavored Lip Balm ($4) that comes in four flavors: Chocolate Fudge Brownie, Strawberry Kiwi Swirl, Mint Chocolate Cookie, or Chocolate Chip Cookie Dough.

Another grrrrreat addition to the balm world was Kellogg’s Lip Balm collection ($7), which included five of your favorite cereals in balm form, including Vanilla Milk, Apple Jacks, Frosted Flakes, Pop Tarts, and Fruit Loops. We must say — we’re intrigued. Definitely intrigued enough to enter the contest, if only for this novelty alone.

Nicole Briese
Nicole is the weekend editor for Brit + Co who loves bringing you all the latest buzz. When she's not busy typing away into the wee hours, you can usually find her canoodling with her fur babies, rooting around in a bookstore, or rocking out at a concert of some sort (Guns N' Roses forever!). Check out all her latest musings and past work at nicolebjean.com.
Beauty Products
Beauty News
Beauty Products Lipstick
More From Beauty News