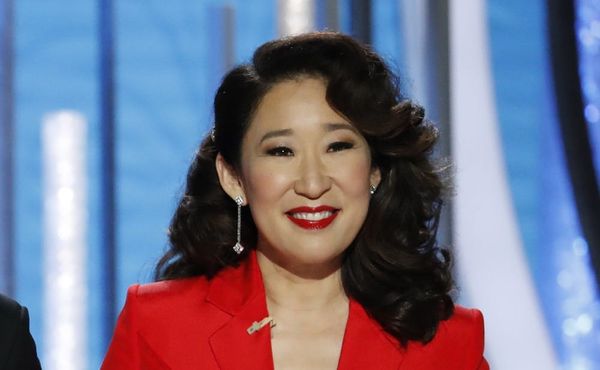 During what might go down as the sweetest opening in awards show history, 2019 Golden Globes hosts Andy Samberg and Sandra Oh kicked off the night by complimenting their fellow guests, riffing on Lady Gaga’s A Star Is Born interview style, and celebrating the changing face of Hollywood.

After praising some of diverse films in Hollywood last year — including Black Panther, Roma,If Beale Street Could Talk, and Crazy Rich Asians — Oh took a moment to explain why she agreed to co-host with Samberg this year.

“I said yes to the fear of being on this stage tonight because I wanted to be here, to look out onto this audience and witness this moment of change,” the Killing Eve star told the audience. “I’m not fooling myself. Next year could be different, it probably will be. But right now, this moment is real.”

As she surveyed the crowd before her, she began to get emotional. “I see you,” she continued. “All these faces of change. And now, so will everyone else.”

The fear of hosting was real for Oh, who told Today that she hesitated to accept the gig when it was first offered to her. “I didn’t have any hesitation regarding Andy. That’s the most grounded that I felt. It’s kind of everything else that is beyond my wildest fears,” she said. “I also feel what this may mean not only for me but for a lot of people in my community. I couldn’t say no just because I was scared.”

This year’s Golden Globes has the most diverse group of nominees in the ceremony’s history.

Kat Armstrong
Kat has been a writer, social media maven and mom for longer than she's willing to admit. She's also spent time in front of and behind the camera, interviewing celebs, politicians and acting as a producer for fashion and artistic photography shoots. When she isn't writing for various orgs and publications, she's hanging with her kids, husband and French Bulldog, Peter, in Toronto, Canada.
Awards Shows
Pop Culture
Awards Shows Golden Globes