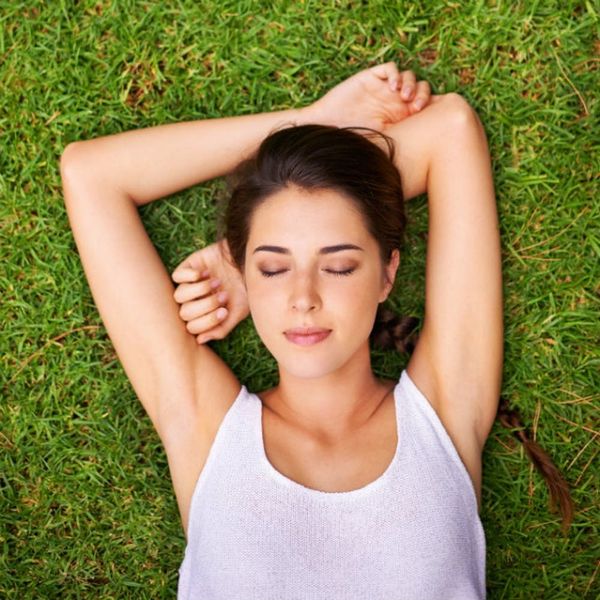 If you’re thinking about how much you’d pay for a power nap at work today — or every Monday — join the (women’s) club. Membership definitely skews female, since women consistently report more trouble getting to sleep and staying asleep than men. And some of our favorite things throw off our internal clocks even more and make for especially drowsy Mondays: staying up late on Fridays for GNO, sipping on Super Bowl cocktails and scrolling through Instagram wanderlust in bed. But science has an easy and fun solution, so get ready to plan a weekend getaway.

A new study from the University of Colorado at Boulder found that people can reset their internal clock, or circadian rhythm, by spending just two days in the great outdoors. Your circadian rhythm is super important. It regulates your sleep by doling out melatonin a few hours before your natural bedtime (triggered by darkness), and scientists believe it plays a part in a lot of other critical functions, down to the molecular level. Beyond sleep, studies have found circadian rhythms are tied to your body’s health, from risk of disease to weight management and emotional well-being.

To see if a weekend in nature could reset people’s internal clocks, researchers sent nine volunteers in their 20s and 30s on a camping trip, and asked five other people to spend the weekend at home. Researchers tracked the change in circadian rhythms for both groups, specifically when their bodies’ melatonin started kicking in. The study found that campers’ internal bedtimes shifted to over an hour earlier than before the experiment. Plus, we can only imagine they had some amazing, undisturbed sleep under the stars. Super telling of our lazy indoor weekend habits, the camping group, who camped in the winter, was exposed to 13 times more natural light than usual. Yikes — we’ve gotta get out more.

The group that stayed at home threw off their internal clocks even more by staying up later, then sleeping in super late (an indulgence that’s actually bad for our weekly sleep routines).

Since we spend more time inside during winter and the days are shorter, the study says you’ll get the greatest sleep benefit if you camp during the wintertime. Time to pack your tent and plan a weekend camping adventure RN, which is possibly the best prescription for health ever. But there’s one rule, according to the study: no tech allowed after sunset!

Would you plan a weekend trip to reset your internal clock? Let us know where you’d set up camp @BritandCo.

Whitney Akers
Whitney is a writer that's equally drawn to the energy of a big city and the peacefulness of the Redwoods. If she's not lucky enough to be on an international adventure, you'll find Whitney enjoying all the urban hikes, used bookstores and fancy cocktails San Francisco has to offer.
Healthy Living
Health
Healthy Living science Sleep study
More From Health