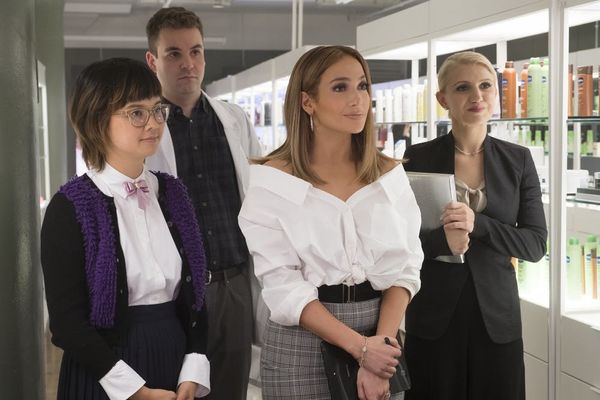 Elaine Goldsmith-Thomas knows all about second acts. And third and fourth acts, for that matter. She started out as a secretary at the William Morris Agency in the 1980s, worked her way up to become an agent, and then reinvented herself as the head of a film studio, a producer, and now — with the release of Second Act, a movie she co-wrote with Justin Zackham for her producing partner Jennifer Lopez — a screenwriter.

In the film, out today, December 21, Lopez plays a woman named Maya, who works as an assistant manager in a grocery store but aspires to bigger things. Unfortunately, her lack of a college degree keeps her from moving up in the world — until her best friend’s son creates a fake résumé and scores her an interview for a big corporate job, which she aces.

The story isn’t a direct parallel to Goldsmith-Thomas’ life, but the general message is one that rings true for her. “Second Act is sort of my own personal journey of invention and reinvention,” she told Brit + Co in a recent phone interview to promote the movie. “And also forgiving yourself. We all fall. But it’s what we do after that defines us. It’s how we rise and how we apply the lessons and what we do next. I have had moments in my life where I was desperately lost. And I thought, ‘What do I do?’ And you start with, ‘What do I want to do?'”

Sometimes the answer to that question involves a huge life change. But not always. “I think second acts are metaphorical. Because I think every day you wake up and you get a second chance, or a second act,” Goldsmith-Thomas shared. “I think that life is full of many dreams, and who’s to say that we should only live one? That’s like saying, ‘Go to bed every night and have one dream. Just one. That’s the only dream you’re allowed.'”

Goldsmith-Thomas has a lot of dreams for herself. Writing is one she’s been pursuing her entire career, but it wasn’t until this film that she decided to really own it and take the credit. “I’ve always been a writer. But I’ve never stood in that truth. Isn’t that interesting?” she mused. “I was afraid of being judged, I was afraid of what people would say, I was afraid that it would limit me somehow. … You know, women have learned to subjugate their power, to give it away, to give away their ideas. Those messages are old, but they’re reinforcing.”

With Second Act, Goldsmith-Thomas wants to send a new message: “The only thing stopping you is you.”

That’s a lesson Maya learns in the movie. Although the film has been billed as J.Lo’s return to rom-coms, Goldsmith-Thomas says the central love story is Maya’s relationship with herself.

Are you excited to see Second Act? Tell us @BritandCo!