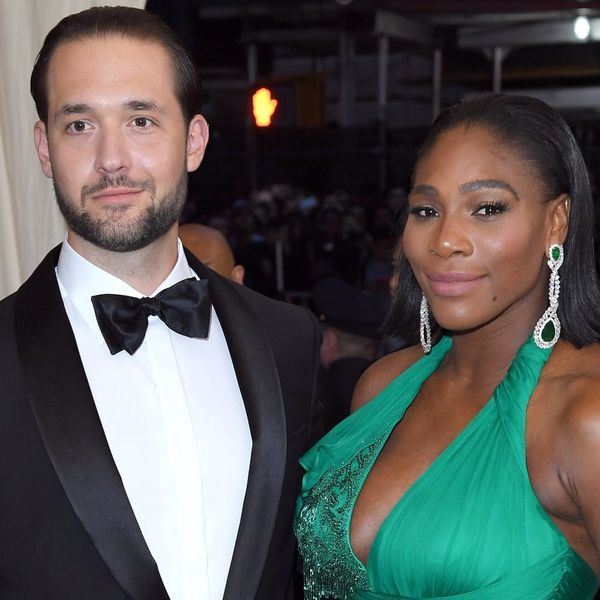 After two years of dating, Serena Williams and her now-husband, Alexis Ohanian, officially tied the knot on Thursday, becoming husband and wife. But the tennis superstar, who’s plenty used to winning both on and off the courts, wasn’t about to go the traditional route by donning a single dress — oh, no. She debuted not one, not two, but three gorgeous gowns on her big day!

First up, the breathtaking Alexander McQueen showstopper she chose for the couple’s ceremony in front of celebrity guests, such as Kim Kardashian West, Eva Longoria, Tina Knowles, La La Anthony, Anna Wintour, and of course, sister Venus Williams, who served as a bridesmaid in a custom nude Galia Lahav number.

@serenawilliams married @alexisohanian in a stunning Sarah Burton for @alexandermcqueen princess gown. Tap the link in our bio for more exclusive photos from the star-studded celebration. Photographed by @mistadubb and @ericamelissa_.

With guests seated on sofas instead of chairs and facing the aisle instead of the alter, the athlete wowed as she headed down the aisle in the caped princess gown with a massive tulle skirt and strapless neckline, adding $3.5 million in XIV jewelry for added extravagance.

Though it’s not exactly what the mommy of one had envisioned (“’[I] ended up falling in love with the silhouette, which is exactly the opposite of what I thought I would choose for myself,” she told Vogue), it ended up being “the one” in every way. “I loved the idea of doing a really spectacular ballgown,” she told the outlet. “It has turned out to be such an incredible piece.” We’ll say!

@serenawilliams: You are the greatest of all time, not just in sport--I’m talking about as a mother and as a wife. I am so excited to write so many more chapters of our fairy tale together. And my whole life I didn’t even realize it, but I was waiting for this moment. And everything that I have done, everything that I am so proud of in my career, and in my life, for the last 34 years, pales in comparison to what we’re doing today. And I am so grateful, and I am so in love. 📸 @mistadubb @ericamelissa_

From there, it was onto the Disney-themed reception (the band played “Be Our Guest” while the guests of honor sat in throne-like chairs), where Williams, 36, debuted her second dress of the evening, trading in her full princess skirt for a svelte, beaded Versace silhouette complete with feathered cape. According to Donatella Versace, the dress took five embroiderers 1,500 hours to make. “They worked nonstop to make sure the tiniest details were perfectly taken care of,” she told Vogue.

After tying the knot with @alexisohanian last night, @serenawilliams debuted her second dress of the evening, a dramatic beaded, feathered @versace_official moment that made her look like a fashion-forward superwoman. Tap the link our bio to see all the stunning photos. Photographed by @melbarlowandco and @allanzepedaphotography.

And the superstar wasn’t done yet! Her third and final look, also Versace, was far more suited to getting down on the dance floor, which is exactly what she did in the short, feathered number to Disney tunes like “Beauty and the Beast,” songs from New Edition, who performed live, and Ginuwine’s “Pony,” complete with a carousel full of white horses.

The bride and groom also performed a series of choreographed moves of “spins, twists, and lifts, to lots of cheers,” reports Vogue.

Talk about a fairy-tale wedding! Congratulations, Serena and Alexis.

Which of Serena’s gowns is your fave? Tell us over @BritandCo.

Nicole Briese
Nicole is the weekend editor for Brit + Co who loves bringing you all the latest buzz. When she's not busy typing away into the wee hours, you can usually find her canoodling with her fur babies, rooting around in a bookstore, or rocking out at a concert of some sort (Guns N' Roses forever!). Check out all her latest musings and past work at nicolebjean.com.
Celebrity Wedding
Wedding Style
Celebrity Wedding Fall Weddings Wedding Photos Weddings
More From Wedding Style