10 Reasons Why Shailene Woodley Would Be Your BFF IRL 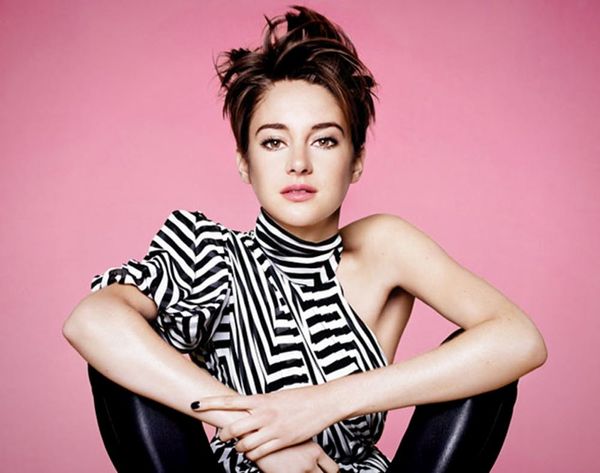 You can’t turn a corner in the world or open up a browser window without seeing Shailene Woodley’s name right now. From rocking our dystopian world in Divergent earlier this year, to making us public cry REAL hard in this week’s The Fault in Our Stars, homegirl is blowing up on the big screen. But it’s her cool factor *off* that has us officially wishing we had her on speed dial. That is… if she had a phone. Wait, what?! Keep reading for 10 fun facts that are going to make you plan that ultimate celeb gal pal brunch with Lupita, B, Emma, Emma and Shailene.

2. She emails Jennifer Lawrence. FOR ADVICE. No, really. Before she accepted the role of Tris in Divergent, she emailed JLaw to seek her sage Hunger Games-earned wisdom. Let’s just say, Jennifer gave her some really solid guidance.

3. She’s a natural DIYer. And we mean “natural” in the literal sense — Shailene almost became an herbalist. She makes tea out of pine needles when she’s sick, brushes her teeth with clay, whitens them with sesame oil and suns herself to keep yeast infections at bay. (Photo)

4. She’s bringing “girl power” back to Hollywood. After being asked how she felt about constant comparisons to Jennifer Lawrence by Jimmy Fallon on a recent Tonight Show, her response was one we can all quote: “As women, we are constantly told that we need to compare ourselves to a girl in school, to our co-workers, to the images in a magazine. How is the world going to advance if we’re always comparing ourselves to others?” That is a better question, SW.

5. She likes to stay out of the spotlight. Sometimes it feels like if you’ve read one breathless celebrity profile in a lady mag, you’ve read them all. Can you believe that every single Hollywood starlet is SO down to earth in her leggings and oversized sweatshirt with just a lick of mascara? Well, we kind of can when it comes to Shailene, who once tricked her reps saying she was going camping in New Zealand just to get some alone time in Hollywood.

6. Her mantra is: “You do you, and I’ll do me.” After journalists at an event were practically appalled that she, a “hippie” would wear red lipstick, her response was golden: “Well, red lipstick makes me feel sexy.”

7. She writes letters everyday. You won’t find Shailene blowing up your timeline anytime soon. The actress says her favorite thing in the world is “writing a letter and sending it snail mail.” Come to our next letterpress R&D, sister!

8. She couch surfs. Right now, Shailene is without a permanent home so she stays on the futons of friends and claims all her belongings could fit into a carry on suitcase.

9. She embraces weirdness. In a recent NY Mag cover story, Shailene and star gal pal Brie Larson talked about their pact to march to the beat of their own drum even when the industry wasn’t cool with it. “We realized that our choices might make people say we are ‘weird.’ But rather than be ashamed of that or try to change, we embraced it.” We’ll embrace it, too.

10. We want to raid her non-existent closet. Cool and effortlessly down-to-earth? Check. Still looks fab when she struts her stuff at fancy events? Check.

Were you a big Divergent fan? Going to see The Fault in Our Stars this weekend? Share your Shailene love below!

Lisa Raphael
In her past professional lives, Lisa has served the masses as the Editorial Director at Brit + Co, Bieber Whisperer at J-14, Golden Girls Fan Club Prez at Lifetime and Talk Show Host Understudy to Katie Couric. Now, she's taking on the sports world at The Relish, teaching Hairography 101 in her spare time and will forever be trying to fill the hole Zayn Malik left in her heart.
Movies
More From Movies