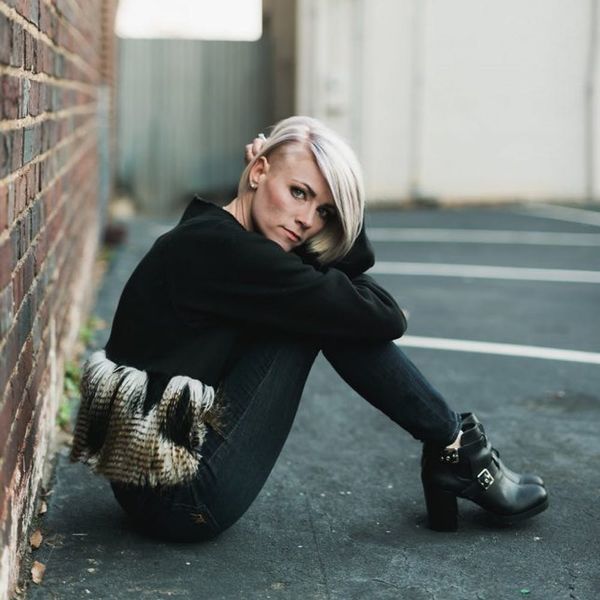 At 29 years old, Shannon Wooten was diagnosed with stage four rectovaginal endometriosis and polycystic ovarian syndrome (PCOS). After years of suffering from the pain and discomfort both conditions caused, it was something of a relief for Wooten to finally have a real diagnosis. But the diagnosis also brought its own challenges, none more bracing than the reality that she and her husband would likely struggle to conceive; both PCOS and endometriosis can make it hard to get pregnant.

Wooten’s experience with infertility and her passion for empowering other people have led her to a new career as a life coach, and she’s also about to be an author of the forthcoming book: Infertility Sucks, You Don’t. As she makes the final edits, she tells Brit + Co that, despite the book’s title, its message isn’t just for women who have dealt with infertility. Rather, it’s for anyone who is going through any sort of struggle that’s weighing on their self-esteem, including depression or addiction.

“What I hope to accomplish with my book is to take infertility or any sort of struggle and normalize it in a way that doesn’t make a person feel like something’s wrong with them, or they’re unworthy, or not capable of surviving,” she says. “And to allow that person to see that you are not this thing that has happened to you. Somewhere along the way, you got lost in it, but you are not it.”

Wooten’s journey from diagnoses to self-discovery didn’t happen overnight. In the four years that followed her medical revelation, Wooten tried everything she could afford to help her get pregnant. This meant several rounds of IUI (Intrauterine insemination), fertility drugs, and acupuncture. None of these interventions succeeded in producing a pregnancy; instead, they brought hair loss, weight loss, and depression. Wooten took on the blame for having what she considered a “defective” body and, eventually, she was so consumed by her diagnoses that they became her identity.

When Wooten turned to social media to talk about her experience, she ended up connecting with women who had similar stories of their own. The more she talked about it, the more people reached out to her to share personal details about what they were going through. She considered it humbling to be trusted with their stories and wanted to do right by them. Finding a way to help others who were struggling became an obsession.

“It was almost like I had an allegiance to it,” she says.

Meanwhile, Wooten was still processing her own feelings of loss over her fertility struggles. She considered reaching out to a therapist or a psychiatrist, but somehow she knew deep down that neither option was right for her. Instead, she decided to seek out a life coach.

In retrospect, Wooten admits that what she really wanted at the time was to “get over it, be happy, and show up as a badass.” She thought that a life coach would offer the magic switch her life needed to snap out of sadness. But she quickly realized that there was much more to the process of coping.

Despite some misconceptions, life coaching is not about someone else having all of the answers for you. Rather, as Wooten explains, “it’s about moving your life forward.”

“Even though I had already begun talking about infertility, there were things that we explored together that never occurred to me could be a reason for choosing to be so committed to my sadness,” Wooten says of her experience with a life coach. “If it’s painful, then it probably needs to be felt.”

This eye-opening experience led her to pursue her own career of coaching others. In her approach to life coaching, Wooten emphasizes that moments of unhappiness don’t mean that a person is weak. If anything, these struggles can make you stronger.

“The experiences we go through can suck, but it doesn’t mean that we’re unworthy as a human because they happened,” she says.

Wooten believes that the decision to seek out a life coach can be empowering for the individual, but the breakthrough will only come if they are willing to have the conversation. Wooten stresses the fact that each and every client is whole and complete as they are. They don’t need to be fixed, but their lives may have disempowering components that are getting in the way.

As for the quest to conceive, Wooten’s story isn’t over yet. She and her husband are currently taking a break from infertility treatments, but she says they are open to IVF in the future.

“We are not completely ridiculous beings for wanting a fairy tale and having a commitment to that,” she declares. “Just because it doesn’t play out that way, doesn’t mean the idea you had in your head can’t transform and still materialize.”

Does Wooten’s message inspire you? Tell us @BritandCo!

From Your Site Articles
Natalie Zisa
Natalie Zisa is a freelance writer based in New York City. When she's not writing about inspiring women, she's pursuing dance professionally. Otherwise, you can find her searching for free fitness classes, lip syncing to her favorite Italian music, and enjoying her mom's homemade pizza. If she could interview one person, it would be Chelsea Handler.
Ladies First
Empowerment
Ladies First Womens Health
More From Empowerment