Why Your Proposal Doesn’t Need to Be a Surprise 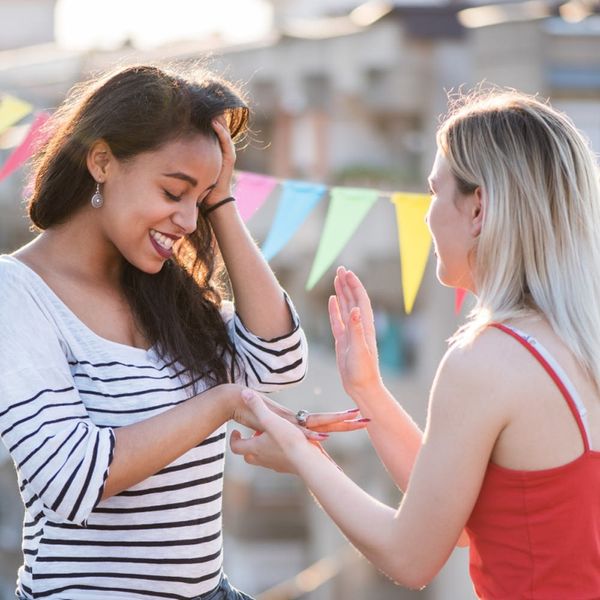 Everyone loves a great proposal story; there’s even an entire Instagram account dedicated to them! While all proposals make us feel the love, no two are alike — especially this day and age, when people celebrate the uniqueness of their relationship with custom rings and one-of-a-kind celebrations. For that reason, the perfect proposal doesn’t exist, but we’re wondering if there’s a secret sauce to popping the question. More specifically: to surprise or not to surprise?

Point: Proposals should be a surprise

Zola, an online suite of wedding and registry planning tools, conducted a survey of newly engaged couples to gauge attitudes about the tradition. The results skew pretty heavily in favor of popping the question as a surprise.

While there’s certainly merit to walking through the proposal process together, the survey indicates that most fiancés-to-be still want the question to comes as a surprise; 89 percent said they wanted the proposal to be a total shock.

Weddings and proposals are associated with some of the longest-standing traditions and social norms of any societal ritual — the white dress, the first dance, and the diamond ring are all symbols that have been incorporated into American weddings for centuries. Traditionally, a man proposed to a woman as a surprise because traditionally, men controlled a large portion of the marriage process. Back in the days where marriages revolved more around money than love, a wedding was a symbol of a financial transaction between the husband and the bride’s father — that’s why fathers traditionally “give away” the bride to her betrothed.

While we’ve certainly advanced far beyond this model, the fact that (most) people still want to be surprised when it comes to the actual engagement could indicate an affinity for the traditions and rituals surrounding weddings. This doesn’t mean that every element of proposals should be a surprise; in fact, only 19 percent of respondents said they wanted their ring to be a total surprise, and almost a third hoped to pick out the ring in advance.

Counterpoint: Proposals shouldn’t be a surprise

Brooke Genn, a relationship coach and former wedding photographer, feels a little differently about the surprise factor. Speaking to the aforementioned outdated traditions when it comes to weddings, Genn feels that modern marriage calls for a modern proposal.

“Marriage has modernized,” she says. “It’s no longer one partner waiting hopefully to get hitched while the other makes up their mind. Today, it’s prudent to have a conversation with your partner about what their stance is on marriage, if they see building a future with you, and when they’d like to begin that journey.”

For some couples, talking about marriage might feel like the norm. For others, it’s a taboo topic that hasn’t been breached yet. If you fall in the latter category, Genn recommends chatting about marriage as an institution to get things started. As things evolve from there, you and your S.O. can begin to have more serious dialogue about your married life.

In this way, Genn says that marriage shouldn’t be a surprise — but the actual proposal itself can be. When it comes down to it, it’s all about what’s best for you and your boo. No matter who’s asking the question and who’s answering it, the “yes” is ultimately a decision between you and your partner.

Should proposals be a surprise? Let us know what you think @BritandCo!

Gabrielle Gresge
Gabrielle Gresge is a Chicago native and journalism student at the University of Missouri. While not chasing deadlines, she enjoys giving campus tours, exploring her new home, and missing her old one. She loves to write about these experiences in her own handwriting at gabriellegresge.wordpress.com.
Dating
Relationships
Dating Marriage Relationship Advice
More From Relationships