Simone Biles May Be Headed to Dancing With the Stars 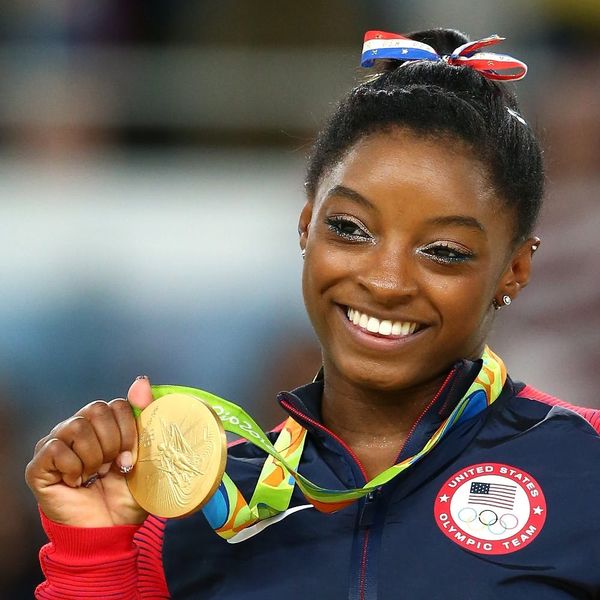 Things just keep getting more exciting for Simone Biles. Not only has she totally rocked the Rio 2016 Olympics, taking home four gold medals and one bronze, she’s also been having the time of her life with her #girlsquad that rivals Taylor Swift’s, winning the affections of Zac Efron AND her “Brazilian boyfriend,” as well as hooking herself up with Hollywood by heading to Pretty Little Liars. Now, it looks like we might be seeing more of the gymnast’s fancy footwork on our fave choreographed competition-based show, Dancing With the Stars.

ET is reporting that a source has confirmed for them that 19-year-old Texas-based master of the mats is among the names being considered for the show’s 23rd season. Simone would be joining the ranks of other past competitors like her very own Olympic teammate, Aly Raison, who appeared on season 16 and finished in fourth place with two-time champion Mark Ballas.

Other names currently being considered include the Bachelorette’s JoJo Fletcher and former Disney star Jake T. Austin. Coming this fall, if Simone does jump on board, there will definitely be plenty of viewers super excited to keep cheering for her and her super-skilled moves.

Meet Team USA: "Confidence comes from years of practice... we're at the gym six, seven hours a day." - @simonebiles | honored to be apart of and share the cover of @sportsillustrated with the other amazing Olympians!!

Would you love to see Simone Biles on Dancing With the Stars? Tweet us @BritandCo!

Desiree O
Desirée O is a ‘Professional Bohemian’ who loves anything and everything related to the arts, entertainment, and pop culture. She ADORES being a ‘Newsy’ for Brit + Co, covering all of the latest tidbits of awesomeness that you want to read about. When she’s not writing, she’s either making messy art, going on long adventurous walks with her camera, or poking around over at bohemianizm (http://www.bohemianizm.com/). You can find out about Desirée O and her work at http://DesireeO.com/ or follow her on Twitter @DesireeO.
Olympics
Celebrity News
Olympics
More From Celebrity News