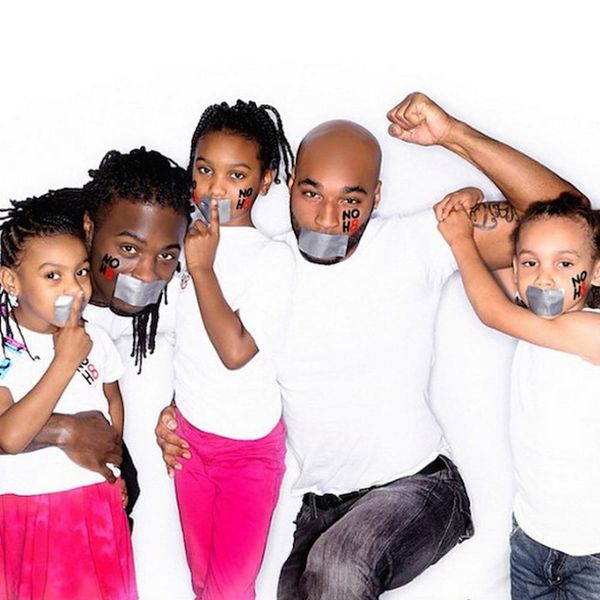 Daddies make the world go ’round, or at least we’d like to think our dads do. If you have been a daddys’ girl (or boy) all your life, or know of a dad who isn’t afraid of diaper duty, this post is for you. In honor of Father’s Day, we are celebrating the men in our lives that take on the challenges of being a father with a smile and make it look like a breeze. Here are 12 social-media-savvy dads who have us singing: “Let’s hear it for the boys!”

1. @aubreymccoy: Aubrey McCoy is husband to blogger James Kicinski McCoy of Bleubird and father to four sweet little ones. The photos he posts of his family on Instagram are magazine-worthy and just so happen to chronicle the length of his hipster-chic beard.

2+3. @kordelnkaleb: Kordale Lewis and Kaleb Anthony are just two dads raising their three wild (and adorable) kids in Atlanta, Georgia. While they did get quite a bit of social media buzz for this mirror selfie, the real stars of the show for them are their kiddos. Check out their feed for more family selfies and stereotype-stomping, equality-fighting pics like this one for the @noh8campaign.

4. @andztweet: Andy Yang is a filmographer based in Sidney, Australia, who became YouTube famous for starting his channel AndymetSonia. His Instagram and YouTube channel follow his journey of being a husband to his beautiful wife Sonia and new father to their baby, Jordan.

5. @gaber008: Gabriel Rodriguez is a Seattle-based photographer who is a father of three and takes the most beautiful photos of his family life and adventures. Be sure to follow Gabe for field trips to the museum, park outings and sneak peaks of his wife’s drool-worthy food prep.

6. @fashiondads: Think your dad has the hottest fashion game in town? Think again. The new Insta account Fashion Dads has taken the fashion world by storm. There is nothing hotter than a pair of Wranglers coupled with your go-to Crocs and socks, right? ;)

7. New Father Chronicles: LaGuardia Cross is a modern-day renaissance man who can rap (Jay-Z actually signed him), act and produce films. But since he and his wife have welcomed baby girl Amalah into the world, he has been focusing on projects close to home. The videos on his YouTube channel, New Father Chronicles, will leave you in tears from laughing so hard! Check out the sneak peak above.

9. @jamespatrickcasey: If you’re the type who loves beautiful photos on your Insta feed, then James Patrick Casey is your man. His stunning photos show his life in Brooklyn that he shares with his wife and baby in a tiny one-bedroom apartment.

10. @coltranecurtis: Coltrane Curtis is the owner of a consumer marketing agency Team Epiphany and former editor of Complex Magazine. His Insta is full of the most adorable pictures of his wife Lisa and son Ellington, whose closet happens to be better than yours and ours combined. If you don’t believe us, check out baby Ellington’s style featured on STYLE.COM.

11. RealityChangers: Jorge Narvaez is a father of two beautiful girls, Alexa and Eliana. We first fell in love with Jorge Narvaez when he was featured on The Ellen Show singing a father-daughter duet of Adele’s “Rolling in the Deep” with his little girl Eliana. His YouTube channel RealityChangers shows his awesome life as a single dad in sunny San Diego.

12. BatDad: Ever wish your dad was a superhero growing up? Well, Blake Wilson’s kids are lucky enough for it to be (kinda) true. While wearing a batman mask and talking with a husky superhero voice, Blake becomes Bat Dad on his Vine account, fighting bad manners in a suburban town near you.

Do you follow any great dads on social media? Let us know in the comments below!

Tomikka Anderson
Tomikka is a PR and marketing consultant who currently lives in the Bay Area. A lover of fashion, soul music and the color pink. When she is not laughing hysterically with her girls, you can find her dancing like nobody’s watching or plotting her next adventure. Follow her on Instagram at mikkasstyle.
Father's Day
Home News
Father's Day YouTube
More From Home News