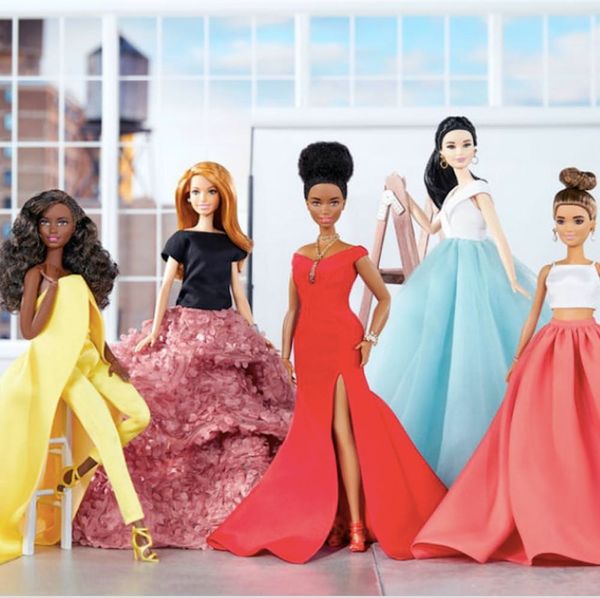 At the peak of Fashion Week runway shows spanning the Big Four style cities of New York, London, Paris, and Milan, Mattel is celebrating a new line of body-positive Barbies that the company has co-created with designer Christian Siriano. Siriano, known for dressing some of Hollywood’s biggest stars and as the winner of Season Four of Project Runway, dressed and designed the dolls based on some of his most memorable celebrity red carpet looks.

The dolls themselves are an homage to some pretty rad celebs. Think: Solange Knowles, Sarah Hyland, Leslie Jones, and Broadway star Laura Osnes. The dresses, all original Christian Siriano creations, are tinier versions of looks worn to Art Basel (that’s Solange), the 2014 Emmys (Hyland), the Ghostbusters premiere (Jones, obviously) and fashion’s most over-the-top event, the Met Gala (Osnes was the lucky woman to get a coveted invite to that party). Siriano also created a fifth Barbie doll to represent his most recent resort line.

“Barbie has always been a huge inspiration to me and I’m honored to be teaming up with this iconic brand,” says Siriano. “It’s especially exciting to be designing an array of inclusive and diverse doll looks that can allow girls to see themselves better represented when they play. It was incredible to recreate iconic red carpet moments and dress my latest muse, Barbie, in a new look from my Resort 2018 collection.”

The aim, as with Mattel’s line of Fashionista Barbies released in early 2016, is to celebrate a diversity of sizes, shapes, and colors — but do these new dolls actually do that? The Fashionista line introduced new male and female dolls with seven different body types (three male and four female), 11 skin tones, and 28 different hairstyles including cornrows, afros, blue hair, and a man bun. It sounds pretty progressive, but when you see the actual dolls, it still looks as though Barbie only includes women sizes zero through 10 in her squad. One of the body types included is even smaller than the already teeny-tiny original Barbie.

As far as we can tell, the new, one-off collection (which won’t be sold in stores), includes one-and-a-half body types. Two, if we’re being generous. The Leslie Jones-inspired doll is a bit curvier than the other four and each doll has a different skin tone, which is awesome. These slight variations on a theme, however, don’t quite add up to a genuinely body-positive vibe for the brand.

VP of Global Marketing for Barbie, Sejal Shah-Miller, says, “Barbie is a fashion icon — she’s been dressed by a multitude of designers over the years who have used her as a canvas to reflect beauty of the moment.”

In reality though, Barbie has a track record of lagging behind “the moment” in big ways. For far too long, Barbie’s hair was blonde, her proportions were inhuman, her math skills were questionable, and her career options were embarrassingly limited. While Mattel has taken steps to modernize the doll’s image, they’ve done it as a response to criticism from parents and the public rather than as an effort that came from inside the company. So when Barbie’s Global Marketing VP says they want their doll to “reflect beauty of the moment,” we can’t help but think that they’re seeing body positivity as a moment, rather than what it truly is: a movement.

Do you think these new Barbies celebrate body-positivity? Let’s talk about it on Twitter!

Corrina Allen
Corrina Allen is a film + television + travel writer from Toronto. Her journalistic goals include a backstage interview with David Byrne, the fictional character she identifies most closely with is John Wick, and her favorite dead person is Vladimir Nabokov. She never, ever Instagrams photos of her food (just her dog).
Body Positive
Diversity
Body Positive Every Body