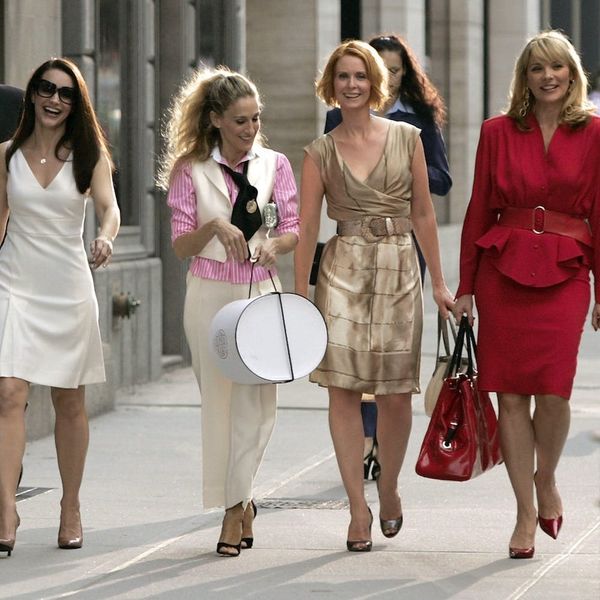 With Fashion Week’s arrival, the FOMO for those of us not in attendance gets very real. Sure, there’s a seemingly unending supply of social feeds to fill the void, but sometimes it’s even better to lose yourself in a stylish cinematic experience for a bit. Whether you’re looking to psych yourself up for the upcoming shows or just kick back and indulge your sartorial sensibilities, we’ve rounded up six films that will make you feel like you’ve got a front row seat this season.

1. Sex and the City: Pretty much every episode of Sex and the City was like being at Fashion Week, so the full-length feature is more like Fashion Month. Over two hours of swoon-worthy looks, gifted to us by the incomparable Patricia Fields. The designer label appearances read like a Who’s Who of the industry and we’re even treated to one gratuitous — but thoroughly enjoyable — fashion montage of Carrie (Sarah Jessica Parker) trying on everything in her wardrobe in an effort to clean out her closet (literally and figuratively). Of course, there’s also the New York Fashion Week scene, set at a runway show where the ladies are front and center. If you’re looking to live vicariously through ultra-stylish characters, this film is basically fashion porn. (Photo via Brian Ach/WireImage)

Real talk: Meryl Streep’s performance is reason enough to fall in love with this movie. That being said, once Andy (Anne Hathaway) is treated to a makeover at the hands of her creative director (Stanley Tucci), the film becomes total eye candy with the editorial ingenue parading around in everything from thigh-high Chanel boots to Vuitton jackets from the Runway fashion closet. It’s a sartorial feast for the eyes and will make you feel like an industry insider every time. (Photo via Arnaldo Magnani/Getty)

There’s not a ’90s girl around who didn’t dream about having Cher Horowitz’s (Alicia Silverstone) never-ending wardrobe, not to mention her computerized closet/styling system. From her signature pleated mini skirts and knee socks to the iconic red bodycon dress, Cher’s lewks are served up hot throughout the entire film, along with those of her besties. It may have been over two decades ago but there are still several pieces from this classic we would totally add to our carts ASAP if we had the chance. (Photo via Paramount Pictures/Getty)

Following Anna Wintour and crew through the creation of the September 2007 issue of Vogue is just as intriguing now as it was when the movie debuted. (That particular installment weighed nearly five pounds and was the single largest issue of a magazine ever published.) The designer and celebrity cameos are plentiful and make for a fun glimpse into the world of the woman behind the sunnies. Come for Anna, stay for Grace Coddington. (Photo via IMDB)

There’s plenty more to Holly Golightly’s style than just that iconic black sheath and sunglasses. This classic flick is chock full of stunning looks created by Hubert de Givenchy and Edith Head, many of which would be totally wearable today (should we be so lucky). That includes chic coats galore, a gorgeous pink beaded confection, and a one-shoulder draped goddess gown that was actually a bed sheet. This is fashion history at its finest. (Photo via Mondadori Portfolio/Getty)

A behind-the-scenes look at the creation of Isaac Mizrahi’s Fall 1994 runway collection (RIP), this documentary is required viewing for fashion lovers. As hilarious as he is talented, Mizrahi takes us along for the ride as he designs a line inspired by Nanook of the North, Mary Tyler Moore, and Alfred Hitchcock. Backing up the designer’s star turn is an ensemble of celebrities (like bestie Sandra Bernhard) and ’90s supermodels — including Kate Moss (!) — that shouldn’t be missed. If you have dreams of designing, or just live for the drama, Unzipped is your jam.
Rachel Aschenbrand-Robinson
Fashion Week
Trends and Inspo
Fashion Week Movies New York Fashion Week