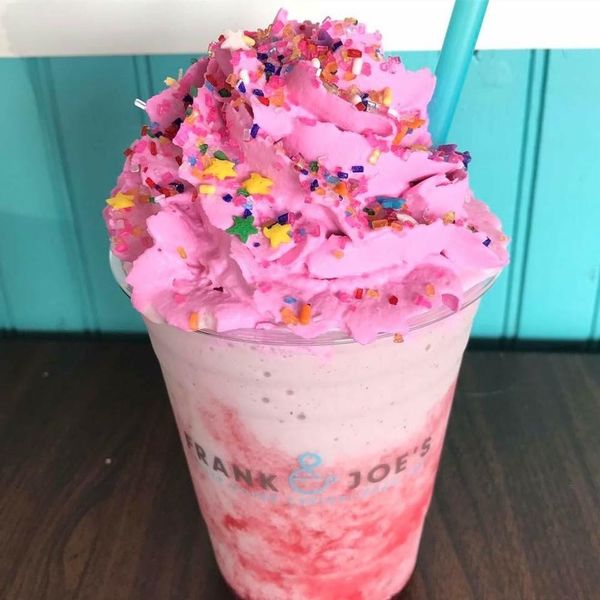 Ahh, the Starbucks Unicorn Frappuccino. It’s been just under a week since the neon pink and blue concoction (which changes color and flavor) was released, and already, it’s sparked so many topics of conversation, we can barely keep up. Never has a drink been so simultaneously hated (by Katy Perry, your local barista, and your diet) and loved (folks are dyeing their hair to match it!). Now, there’s even more dramz in Unicornville, as a Texas coffee shop is calling the coffee chain out, claiming they actually invented the drink.

Frank & Joe’s Coffee House in Wichita Falls is speaking out to say that their business dreamt up the Unicorn Frappuccino weeks before Starbucks’ released their own version. They apparently began serving up what they’re calling the #originalunicornfrap (a pink, strawberry frap made with triple berry homemade whipped cream and pretty sprinkles) last month after “three days developing flavors and trying to figure out what people would like,” says owner Jessica Edwards.

According to taste-testers polled by local news station KAUZ, Frank & Joe’s version is a less “watered down,” more fruity version of its Starbucks counterpart. And while it hasn’t seen the wild success that Starbucks has boasted, it’s been an absolute hit in the area, with even the most surprising of customers. “A lot of men actually order them and say it’s for their wives or girlfriends; it’s just fun,” Edwards revealed.

Frank & Joe’s does have a leg up on the coffee house in one way, however: While Starbucks is offering their insane hit through tomorrow only, the Texas business has promised to continue serving up its Unicorn Frap all year long.

Time for a a road trip?

Do you think Starbucks copied the Texas coffee chain? Tweet us @BritandCo.

From Your Site Articles
Barbara Pavone
Barbara Pavone is a pop culture-obsessed writer based in beautiful (but ridiculously cold) Montreal, Canada. When she's not working, she's sipping on a Pimm's Cup and daydreaming about her celebrity hero, Saint West.
Controversy
Food News
Controversy Starbucks unicorns
The Conversation