Is This the Park of the Future? Charge Your Phone on a Rock! 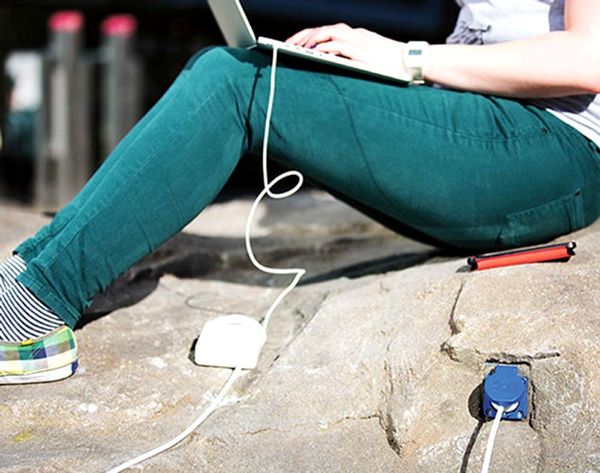 Rocks = SHRN. At least they are in Germany where a large rock sculpture is offering a spot in the middle of the city for urbanites to unwind and charge up. The sculpture is called “Stein mit Vollausstattung,” which translates into “the coolest pop up park ever” — JK, it translates to “stone with full equipment” and we like how this rock rolls.

The “participatory project” was created by four artists in the German city of Dortmund who wanted to transform unused space into a public spot powered by renewable energy that it also creates. Stein uses a wind turbine (handy since it’s in the middle of a wind corridor!) along with solar panels to create green energy that powers the rock’s outlets. While they’re hanging out on it, people can charge up their devices or even leave them in the sculpture’s little lockers while running errands or walking around town.

The artists behind Stein hope their sculpture will lead to a bigger conversation about how to use renewable energy throughout the city. With a smart solution for utilizing public space that encourages activity, city exploration AND energy creation, we think it could be a bigger, as in, global-bigger chat. We could see “pop up parks” that make and use renewable energy being a hit in any city or towns that host annual festivals. How about setting up some bikes and other fitness equipment in them that add to the energy created plus get people moving?

We are a little Europe-obsessed these days with so many green, health-conscious, tech-fueled ideas being pioneered over there. We want the Trampe to push our butts-on-bikes up hills. We want to live in a 3D printed home. We want to make a pitstop at the Internet ER. And now we want to charge our Kindle while we read it and bask in the Dortmund sun. Sigh. At least we always have IKEA.

What do you think of Stein mit Vollausstattung? Does your city feature anything as cool? Take us there/share with us below :)

Lisa Raphael
In her past professional lives, Lisa has served the masses as the Editorial Director at Brit + Co, Bieber Whisperer at J-14, Golden Girls Fan Club Prez at Lifetime and Talk Show Host Understudy to Katie Couric. Now, she's taking on the sports world at The Relish, teaching Hairography 101 in her spare time and will forever be trying to fill the hole Zayn Malik left in her heart.
Health