We Need This NOW: This Bike Elevator Helps You Up Hills 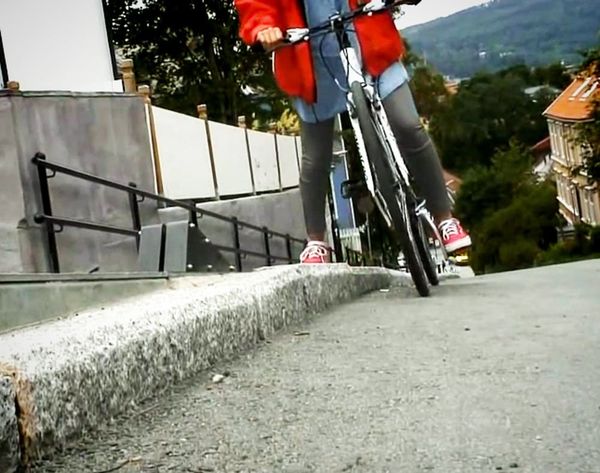 No, not now, like, yesterday. Trondheim is the bike capital of Norway and, now, of our hearts as well. The beautiful city just reopened Trampe, the world’s first ever bicycle elevator. Originally built back in 1993, it’s updated with new, fancy safety regulations and a changed name to take it viral and global: CycloCable.

To nab a (free, BTW) ride, cyclists saddle up about four inches parallel to CycloCable and place their right foot on the footplate. At around three and a half miles per hour it will guide them to the top of steep hills. It might remind you of how you send your shopping cart up the escalator at Target but here, you ride along with it all 427 feet.

At first glance, we questioned the safety, or at least our own personal stability, but the Trampe is equipped with instructions for how to do it right and it’s no biggie at that pace if you have to “restart.” Even little kids make it look so darn easy — watch the CycloCable in action here:

Hitching a ride in your hometown might not be too far off! French cableway company Skirail is hoping to introduce CycloCable to the international market now. It can take up to 360 cyclists per hour and could be built up to 1,640 feet long. We would vote San Francisco, home of hills and bikes, as its first US stop.

Biking around your town can be daunting to those of us who don’t live in our kits or opt for a cute cruiser over a fixed gear, so anything that makes it seem more doable and accessible is a win. If more cyclists eventually translates to cleaner, healthier, even safer streets, we’re talking a top notch trickle down effect — and hopefully more bike-friendly initiatives like CycloCable in a city near you.

What do you think of CycloCable? Do you live in a bike-friendly city? Share below!

Lisa Raphael
In her past professional lives, Lisa has served the masses as the Editorial Director at Brit + Co, Bieber Whisperer at J-14, Golden Girls Fan Club Prez at Lifetime and Talk Show Host Understudy to Katie Couric. Now, she's taking on the sports world at The Relish, teaching Hairography 101 in her spare time and will forever be trying to fill the hole Zayn Malik left in her heart.
Cycling
Health
Cycling