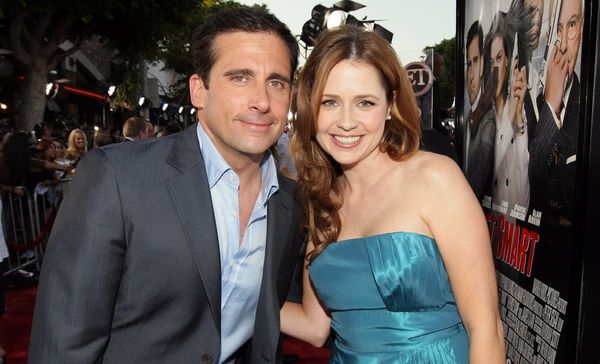 Be still, our hearts! While an official Office reboot remains unconfirmed, two of the NBC comedy’s stars had a reunion on Busy Tonight when Steve Carell showed up as part of a birthday surprise for Jenna Fischer.

During the Tuesday, February 26, episode of Busy Tonight, host Busy Philipps had Fischer — who played receptionist-turned-salesperson-turned-office administrator Pam Beasley on The Office — do an unboxing of gifts from her former costars.

Fischer had to guess which of her castmates had sent each gift, and she nailed the first three from Ellie Kemper, Angela Kinsey, and Ed Helms, telling stories from set about each of the inside jokes. She and Philipps then moved on to a huge box sitting on the floor beside them. As Fischer, surprised by the size of the gift, slowly removed the lid from the box, Carell popped out to surprise her — a total Michael Scott move if we’ve ever seen one.

Fischer was genuinely surprised and looked moved to near-tears as she tenderly hugged her former TV boss. Later in the show, when asked if he had anything to plug, Carell joked that he’d be jumping out of boxes all over Los Angeles in the coming months. (We wouldn’t mind getting one of those boxes, FYI.)

Another mini Office reunion happened recently when Carell hosted Saturday Night Live in November 2018. As part of his opening monologue, which featured an audience Q&A, Fischer, Kemper, and Helms joined the Beautiful Boy actor to try to convince him to take part in a reboot of their beloved single-cam comedy.

“People would really love to see an Office reboot,” Kemper said. “Especially me because I need that money. Let’s get that money, Steve!”

Fischer, in a tone that was markedly different from what she demonstrated on Busy Tonight, recalled an iconic scene for her plea. “Do you remember the last words that Pam secretly whispered to Michael as she left for Denver?” Fischer asked. “She said, ‘Steve, don’t be a d***. Do the reboot.'”

Would you like to see an official Office reboot? Let us know @BritandCo!