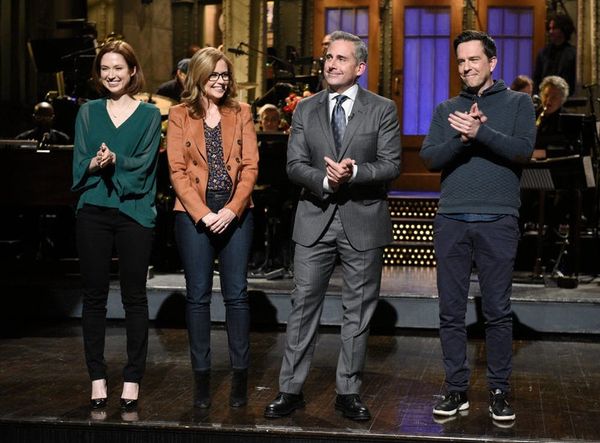 Since news first broke last December that a revival of The Office might be in the works at NBC, fans of the sitcom have been left to patiently await updates. While the show’s star, Steve Carell, has been busy taking on increasingly serious roles (like in October’s tear-jerking Beautiful Boy) and not talking about the buzzed-about reboot, he did give Saturday Night Live viewers a glimmer of hope with a mini Office reunion during his opening monologue.

As part of a sketch that involved an audience Q&A, the 56-year-old was put on the spot by a slew of his former colleagues, all of whom tried to convince him to say yes to the new show. Ellie Kemper kicked things off by declaring, “People would really love to see an Office reboot. Especially me because I need that money,” she quipped. “Let’s get that money, Steve!”

Ed Helms was next in line, proclaiming, “I just don’t think you understand how much money we’re talking about. You wouldn’t have do all those sad movies anymore.” Carell explained that he isn’t picking his roles based on money and that he’d love to catch up with his former costars away from the cameras, but Helms shot back, “We already do that, we just don’t invite you.” Ouch.

Jenna Fischer was the last of Carell’s former cast members to take her shot, teasing, “Do you remember the last words that Pam secretly whispered to Michael as she left for Denver? She said, ‘Steve, don’t be a d***. Do the reboot.'” Carell’s wife and kids then presented the final argument of the night, pointing out, “We think you should probably do the show. We don’t really need you to hang around anymore.”

With Kemper, Helms, and Fischer all joining Carell on stage, it appeared that the funnyman was about to make a major announcement. “I am proud to announce, officially…” he began, “…that we have a great show tonight!” Looks like we’ll have to wait a bit longer to find out more.

Would you watch an Office reboot? Tweet us @BritandCo.

(photos via Will Heath/NBC)

Barbara Pavone
Barbara Pavone is a pop culture-obsessed writer based in beautiful (but ridiculously cold) Montreal, Canada. When she's not working, she's sipping on a Pimm's Cup and daydreaming about her celebrity hero, Saint West.
Nostalgia
TV
Nostalgia TV
More From TV