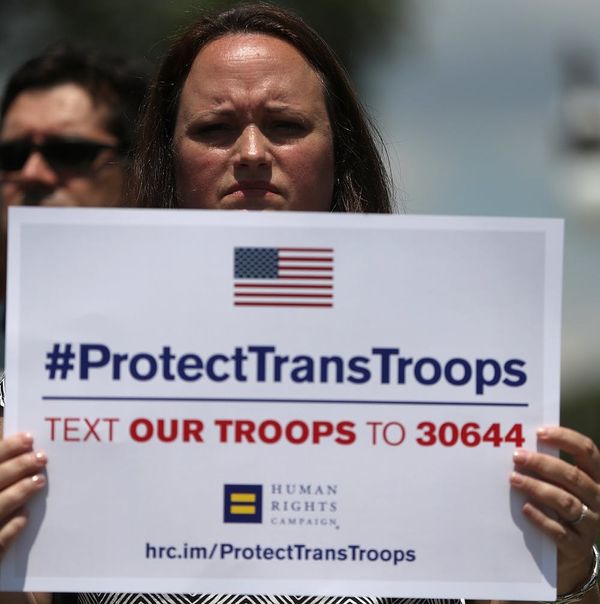 The Supreme Court has lifted blocks on President Trump’s ban on transgender people in the military, deciding five to four on the morning of Tuesday, January 22, to put a hold on temporary injunctions against the 2018 Mattis policy — AKA the most recent version of the ban. There’s some confusion and debate as to what that decision actually means, though.

Many news outlets, including the New York Times, Washington Post, and CNN, reported that Tuesday’s SCOTUS vote means that the Pentagon is within its rights to enforce the Trump administration’s policy, at least for now. But, via Twitter, a spokesperson from the ACLU offered a contradictory interpretation: that the ACLU’s own case against the ban, Stone v. Trump, and the injunction granted by a judge “are not impacted” by the SCOTUS ruling. This means that the total ban on transgender people in the military is still blocked nationwide while the case is decided in a Maryland court, according to the ACLU.

Lawyer and Slate writer Mark Joseph Stern tweeted that he confirmed, with the case’s litigator, the ACLU’s assertion that Stone v. Trump remains in place. Stern tweeted: “It is extremely like[ly] that, in light of today’s SCOTUS orders, that injunction will soon be reversed. But for now, it remains in effect. So the trans troops ban cannot yet begin.” Stern also pointed out that while “the Trump administration may try to argue that [Stone v. Trump] doesn’t apply to the current ‘Mattis policy,'” its terms encompass the current policy’s parameters.

In a post for the blog Lawfare, Harvard Law student Sarah Grant seconded Stern’s prediction that the Stone v. Trump injunction will likely be reversed, and soon. But Grant also wrote that because the case doesn’t pertain specifically to the Mattis policy, which is the version of the ban that the Trump administration is trying to implement, the injunction may already be moot.

The reinstatement of a decades-long ban on openly transgender military members — which had been overturned in the final months of Barack Obama’s presidency — was one of Trump’s first major policy decisions as president. The decision became a defining example of the administration’s inclinations toward bigotry.

The implementation of Trump’s transgender military ban could see the ejection of transgender people currently serving in the military, and prevent others from enlisting. The ban would also allow the military to deny transgender service members coverage for some medical services, such as funding for gender-confirmation surgery.

Because the US military is estimated to be the largest single employer of transgender people in the world, a ban would have a significant impact on transgender communities. According to the National Center for Transgender Equality, there are around 15,000 transgender people serving in the military, and approximately 134,000 US veterans are transgender. If transgender service members are discharged from military service, they will be forced to find work in a job market that is already hostile to transgender people.

Joshua Block, a senior staff attorney with the ACLU’s LGBT and HIV Project, said in a 2018 interview about the transgender military ban that “the administration wants to encourage discrimination against trans people any time it has power to do so. But the military does have a special salience on our society. Excluding trans people from the military sends a powerful message that trans people are not part of the fabric of American civic life.”

Katelyn Burns, a transgender journalist who covers Capitol Hill, tweeted that this ban is “not about the military, it’s about the right of trans people to live their lives unfettered by the government.”

Elizabeth King
Elizabeth King is a politics, history, and culture writer based in the Twin Cities. She is generally pretty cranky but still enjoys traveling, music from the early 2000's, and plotting the resistance. Feel free to say hi on Twitter at @ekingc or check out some of her work at www.elizabethcking.com.
Controversy
Gender Issues
Controversy LGBTQ Politics
More From Gender Issues