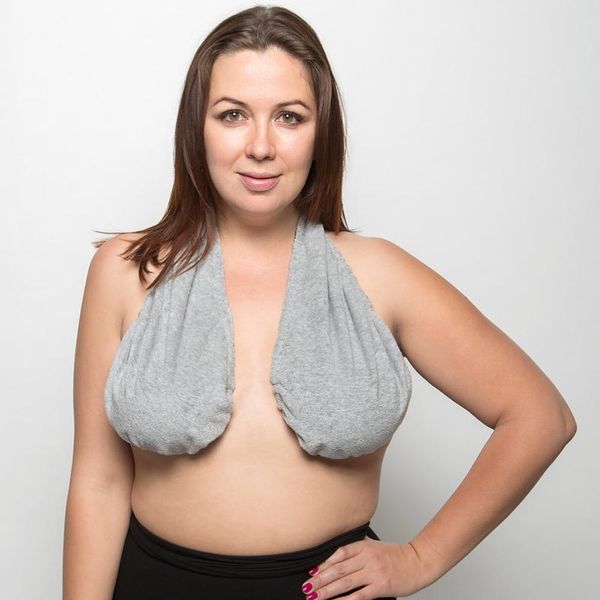 If there’s one thing that ladies everywhere can agree on, it’s that boob sweat sucks. But there’s a new towel in town and it’s here to solve that dampening woe. It’s either the strangest or most genius new invention, but busty girls, this one’s for you. Say hello to the Ta-Ta Towel ($45).

It’s exactly what it sounds like: a towel to combat boob sweat. The new-fangled contraption was created by a woman who struggled with keeping her underboob dry post-shower. “I tried everything: I tucked wash cloths under my breasts, I tried dumping baby powder all over me, I even put a T-shirt on and tucked it under my boobs,” inventor Erin Robertson wrote on the product’s blog. And since hitting the web, it’s gone mega-viral on the internet.

C’mon now, you didn’t expect the Twitterverse to just sit back and keep its mouth shut now, did you? Some folks are loving the idea and think it’s been a long time coming.

the #tatatowel is real life version of the phrase "over the shoulder boulder holders" 😂 pic.twitter.com/qWHApS4OK8

🤣🤣🤣I know what everyone is getting for Christmas this year! #TaTaTowel pic.twitter.com/LgqG1ROFsj

I can't even. Like why didn't I think of this?! #tatatowel pic.twitter.com/kKr4A0Hemn

Others were not so excited with many feeling there was simply no need for a boob towel, especially at its price point.

What the fuck is that?! pic.twitter.com/izRItY4Jeo

What do you think of the latest craze? Tell us @BritandCo!

Shea Lignitz
Shea can be found in the nearest bookstore or brewery, exploring the great outdoors, or blasting Led Zeppelin. She grew up in the cold and rain of Northern California's redwoods but is currently wandering around Texas.
twitter
Style News
twitter
More From Style News