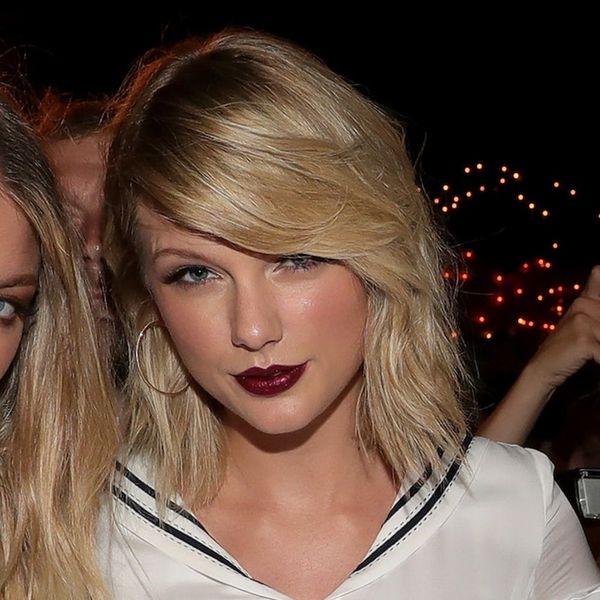 1. Taylor’s got a new man!? This is the total opposite of her VERY on-display relationship with Tom Hiddleston, but the Sun is reporting that Swift and British actor Joe Alwyn (Billy Lynn’s Long Halftime Walk) have been dating for months. Swift reportedly employs heavy security and dons disguises when in London with him to avoid attention, and their friends and family all know — it’s just the press (and fans) that have been kept in the dark. (Photo via Neilson Barnard/Getty)

2. Amy Schumer and Ben Hanisch are donezo. Say it ain’t so — Amy Schumer and her dreamy furniture-maker boyfriend of over a year, Ben Hanisch, have split up, telling People in a statement that they’ve done so after “thoughtful consideration,” and that they remain friends. These two seemed SO adorable together. In a recent interview during her Snatched press tour, Schumer told Howard Stern that they were still dating, but that at the moment, marriage was not a discussion they were having. (Photo via Gareth Cattermole/Getty)

3. The This Is Us season two promo doesn’t even have any new clips of the show but will make you weep so hard. NBC has released not so much a trailer, but a promo clip for season two of everyone’s favorite new show, and goooood luck not bawling your eyes out. The clip stars Mandy Moore, Milo Ventimiglia, Chrissy Metz, and Sterling K. Brown, but it also stars the show’s fans, sharing emotional stories of their own family — good and sad. The cast watches backstage then surprises these fans and GAHHH, CAN’T HANDLE IT!

4. Excuse us, but there is a Grey’s Anatomy spinoff involving firefighters coming to TV. ABC announced at its upfronts that a Grey’s Anatomy spinoff from series creator Shonda Rhimes has been picked up. “From the captain to the newest recruit, we follow these brave men and women as they risk their lives and their hearts both in the line of duty and off the clock,” ABC said in a press release, noting that the series would be set in a Seattle firehouse and feature a group of firefighters. The lead character will be introduced in an ep of Grey’s next season before the spinoff starts mid-season 2018. Um, yes. (h/t Deadline, photo via Mike Coppola/Getty)

Why stop at suing? She deserves jail time! https://t.co/c41MWGz74M

5. A man is suing his date for texting during Guardians of the Galaxy II. Honestly, would do the same. According to the Austin American-Statesman, Brandon Vezmar is seeking the price of his movie ticket ($17.31) from the woman he went on a first date to the movies with. She reportedly wouldn’t stop texting. He calls it the date from hell. Of course gotta hear both sides — maybe she had a family emergency or something?! — but we have to side with the guy in this one. Put your phones away at the movies! (h/t Mashable)

6. Quote of the day: “The opinion which other people have of you is their problem, not yours.” Elisabeth Kubler-Ross’s insight is the perfect #WednesdayWisdom.

Do you have any words of wisdom you like to share with friends? Let us know @BritandCo!