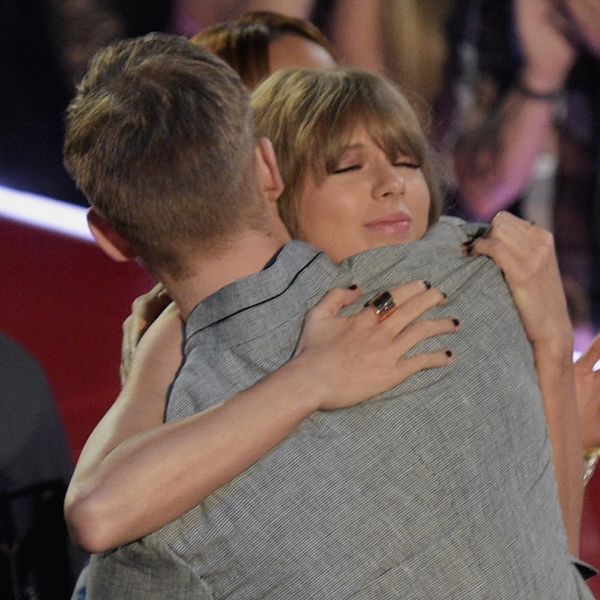 1. Taylor Swift cleaned up at the iHeartRadio Music Awards last night, and while we’re used to Taylor saying some noteworthy stuff in her acceptance speeches, her heartfelt tribute to BF Calvin Harris when she won the award for Best Tour. “For the first time I had the most amazing person to come home to when the crowds were all gone and the spotlight went out, so I’d like to thank my boyfriend Adam for that,” Taylor said, referring to Harris (whose real name is Adam Richard Wiles). Aww! She also won the Album of the Year award during which speech she said it would be her last awards show for a while, and while that likely means she’s taking some downtime to start working on a new album, we don’t imagine she’ll be too far out of the spotlight for too long. (Photo via Rich Polk/Getty)

2. Does Amy Schumer have her own version of Taylor Swift’s squad? And if so, how do we join? The comedian went on a ‘Gramming spree of her and Lena Dunham’s night out at a Rihanna concert together, and it has inspired a whole new level of FOMO in us. Amy was rocking a pair of hip nerd glasses, Lena’s trendy lip color was on point, and the fact that they also hung out with Chris Rock (and Lena’s bf Jack Antonoff) makes it look like the kind of night out we aspire to (when we inevitably become bffs with Amy, that is). (via @amyschumer)

3. Fuller House star Candace Cameron-Bure was ADORABLE at her surpirse 40th bday party. “Oh my gosh are you kidding me?!” Candace squealed right before giving husband Valeri Bure a big ol kiss for organizing all her friends and family to celebrate in Napa Valley, California. As she walked toward the party, Cameron-Bure started to cry. We didn’t, tho. No way. (via Facebook)

4. Jennifer Aniston admits she still owns some of her wardrobe from Friends. Given the resurgence of ’90s fashion, Jennifer’s closet full of Rachel Green itesms would be one of the first on our list of Dream Places to Shop. “I have certain things I have yet to throw away from my days on Friends,” she told Vogue. “My red squared-toe loafers might actually be making a comeback, that’s awesome. See, it’s coming back—I knew it. I also have those nice high-waisted jeans. I’m so glad I didn’t throw any of those out. I loved the ’90s.” (via Vogue, photo via Getty Images)

5. These dogs who dressed up and went to the opera had a way fancier weekend than us. Opera Australia hosted a Doggie Day this weekend, inviting guests to bring their dogs in their finest formal wear in support of local animal rights organisation RSPCA. There was a costume contest, and the dogs were actually encouraged to howl along to some opera music at one point. All of a sudden a weekend spent binge watching Netflix on the couch seems like a terrible waste of time. DOGS IN TUXEDOS! (via Facebook)

6. Quote of the day: “Divorce might make one feel like a failure, but eventually you start to find grace in the idea that life goes on.” – Drew Barrymore releases a thoughtful and hopeful statement confirming her separation from husband Will Kopelman.

What’s your Monday motivation today? Let us know at @BritandCo!