13 Ways to Turn Your Tech Obsession Into a Halloween Costume 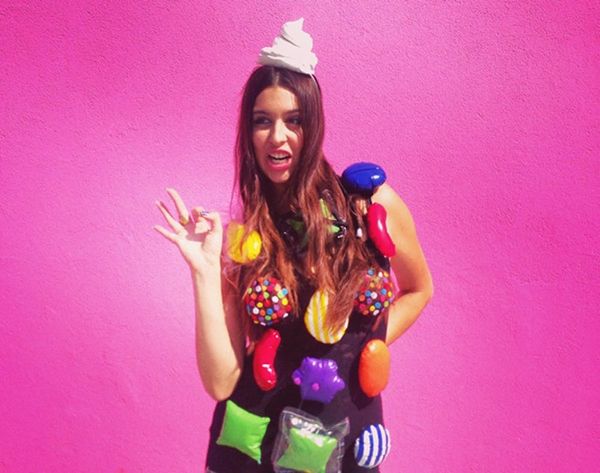 We’ve seen our share of Holly Golightlys, more than enough Pac Men and already spotted Waldo 30 times over. The options for Halloween costumes are endless, but this year, why not do something different? Delve into the digital age this year with these 13 tech-inspired costumes.

1. DSLR Camera Costume: Why pose for a million photos in your halloween costume when you could be the camera instead? This guy has the right idea. (via DVICE)

3. Google Maps: We have a very strong feeling this adorable couple definitely knows where the party’s at. (via Flavor Wire)

4. Nyan Cat: Bring this viral sensation to 3D land! This costume would be pretty easy to recreate and basically you get to be a kitty, Pop Tart and rainbow all at that the same time. What’s not to like about that? (via DVICE)

5. Candy Crush: We can’t believe our eyes! Our favorite way to procrastinate is now wearable! The best part is this crafty gal even shows you how to make your own! (via Jacquie Long Legs)

6. Tinder: Looking for love this Halloween? Sport this Tinder costume and see who decides to be your match. (via Facebook)

7. iPod Family: Well aren’t these the cutest nano’s we’ve ever seen? Here’s a fun way to keep close to your kiddos while they trick or treat. (via Now You Know Events)

8. Mozilla Firefox: Alright, so this one is not for the shy, but if you really love the Internet why not tell the world in a totally foxy way. (via Costume Me)

9. iPhone: We know the iPhone costume isn’t anything new, but we have to give some credit to this guy whose costume actually works! Maybe at the end of the night he can lay on his side while we watch Netflix? (via The Mathhattan)

10. iPhone Box: Because why should the iPhone always get all the glory? Make up for an obvious lack of effort with a whole lot of wit. (via Mashable)

11. Pinterest Board: So cute! And all you need is some ribbon and a cork board. (via She Knows)

13. Instagram: This Instagram icon is actually a working camera! It’s powered by a Nikon D800 snapping photos through the lens in front and has an iPad on the back that acts as the camera’s giant LCD screen. (via Peta Pixel)