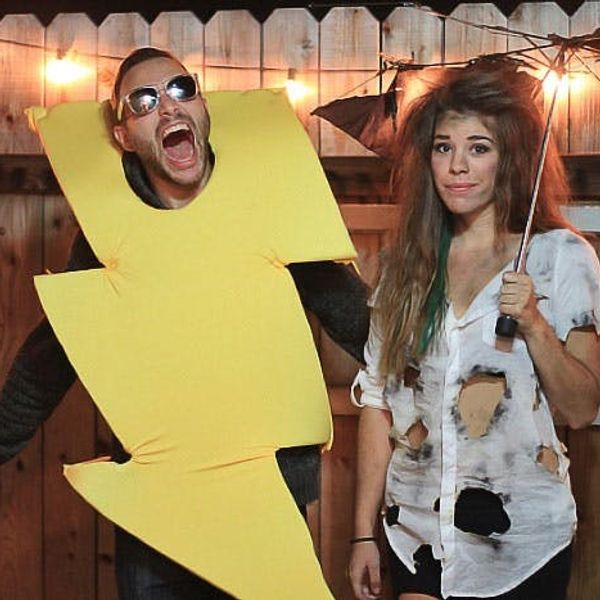 Drumroll please, it’s time for our second official installment of your favorite thing ever: Couples Costumes!

Last year we served up 25 of the best, and this year we’ve got a whole new crop of DIY goodness to share with you.

1. Doritos: I mean, Doritos? Nacho Cheese? Cool Ranch? How can you go wrong?

2. Struck by Lightning: Love this combo of lightning and someone struck by lightning. Also, how much fun is that lightning having?!

3. Silent Film Stars: Make your debut as a silent film star in 100 percent black and white.

6. AcroBATS: Get it? Acro… BATS! They’re acrobatic bats, and they will most likely make it in into every photo booth picture at whatever Halloween party they attend.

8. Fantastic Mr. and Mrs. Fox: We won’t be surprised if foxes are back in fashion this year thanks to What does the fox say?

Imagine… yourself as Yoko and your husband as John. I can tell you from firsthand experience (I’m the Yoko!) that these two iconic crooners are easy to recreate with a few trips to the thrift shop.

10. Beetlejuice Couple: Now that’s a Beetlejuice costume we haven’t seen before! Dress as the monster versions of the parents stuck in the attic in one of our favorite spooky flicks.

Yes, we did feature this couple in the best ’90s costumes roundup, but it’s just that good!

12. French Baker and French Wedding Cake: Consider yourself a bit of a Francophile? Then dress yourself up as a croquemboche and get your beau to dress as a baker!

13. Johnny Cash and June Carter: Dress as star-crossed lovebirds from the beginning of country music’s heyday. Just be prepared to sing “Walk the Line” over and over again.

15. Piñata and Birthday Girl: Just make sure the birthday girl doesn’t have any pent-up stress when you guys “hit” the party circuit.

17. Moonrise Kingdom: Both of these were honorable mentions in last year’s costume contest, and would still work well this year!

Rise and shine campers! You can probably create this costume out of items you already have, save for a whistle and a sweatband. This could also be a great base for being two counselors from Wet Hot American Summer.

Oh, these two. The teenage angst, the dyed air, the flannel. Can we please bring back My So-Called Life? And guess what? The Angela in this costume is our very own editor, Kate Puhala. Woot woot!

20. 3D Viewmaster and Slide Reel: How awesome is this?! Such a fun pair, though not the easiest costumes to bust a move in.

21. Trophies: Of course, you can quite literally go gold from head to toe!

22. Spy vs. Spy: Remember Spy versus Spy? From Mad Magazine? Such a great ’80s throwback costume.

23. Squints and Wendy Peffercorn: It took us a minute to figure out who these two were – turns out they are two of the kids from The Sandlot! Awesome, though on the slightly obscure side.

24 .Willy Wonka and Golden Ticket: Now we just need someone to dress up as a golden goose and we’ll be all set.

25. Black Swan: This costume is EPIC, and the dude looks totally terrifying but also kind of beautiful?