Here’s How Playtime Has Evolved Since You Were a Kid 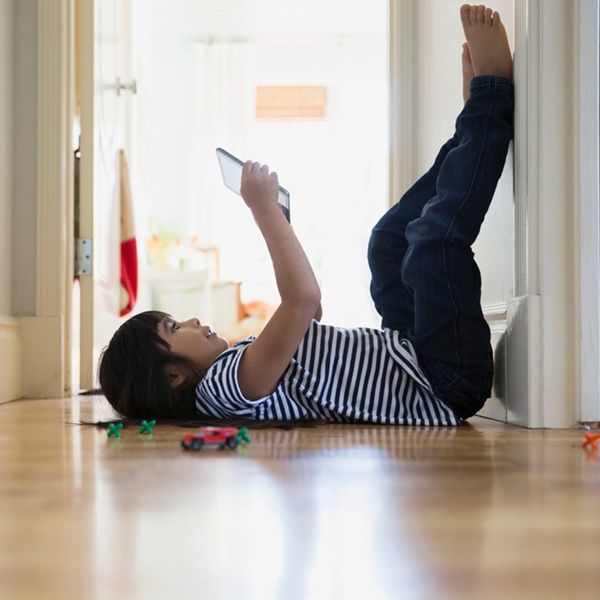 The summer sun is fading into a brilliant blend of reds, purples, and pinks as the neighbor kids toss their bikes into your yard, grab a few sodas, and scramble to catch fireflies. You loved these kinds of nights, growing up in the 1980s. But your kids, rather than soaking up their surroundings, are tethered to their iPads, watching fireflies buzz by on their screens. Before tech took over, playtime without screens, gizmos, light-up gadgets, and educational apps was an actual thing, but nowadays, it looks a lot different.

Of course, playtime doesn’t mean the same thing to every parent, at every age, or in every culture. Some parents may see it as a completely free time when kids can explore, investigate, and experiment to their heart’s content. Other parents may look at play as a time to learn — not through books and worksheets, but through educational toys and tech. The one thing we can all agree on: Playtime is way different than it used to be. Scroll on for a look at how it’s evolved since you were a kid.

Playtime of the Past

Close your eyes and let your mind wander back to your childhood. More than likely, playtime was pretty low-tech. Sure, you might have had Texas Instruments’ totally tech-forward (for the time) Speak & Spell, or you may have even spent your days playing video games on that super-cool, very modern Nintendo. But you certainly didn’t have the entire world at the tips of your fingers on a smartphone.

Your version of childhood play probably looked more like impromptu romps through the woods, designing your own toilet paper and marker dresses for your dolls, racing pint-sized metal model cars through the dining room, or racing bikes with your BFF (down the middle of the street, no less). Oh, and all of this was done without a parent’s direction. Hey, no one is saying playtime back then was completely safe. It was just done without parents hovering nearby — and without the electric whir of a laptop battery vent, the blue light of a screen, or apps.

The playtime we knew and loved hasn’t entirely disappeared. There are still kiddos digging in the dirt, playing backyard baseball, and dressing up in mom’s old prom gowns. Even though play may still exist, some parts of it have changed pretty dramatically.

You may have learned how to use a computer sometime in high school or even college, the cell phones of your youth were like bricks, and an app was something you ate before dinner. But, your child’s life is completely different. Your kiddo is growing up in a time when toddlers know how to swipe, tap, tab, and click, and kindergartners are learning how to code. Play may still include those traditionally low-tech games such as “Red light, green light,” but now, they’re using a computer screen to stop and go.

The Best of past and present

So, now you’re asking, “Is the play of my youth gone?” Well, not exactly. Those old-school activities, such as running through the yard or building with blocks, still exist. The problem is, they’re getting crowded out by technology. Given the choice between playing baseball IRL or playing a World Series pitcher in a video game, many kids opt for the screen. It’s easy, it’s enticing, and it’s fun.

No one is saying you need to nix screen time 100 percent. Let’s face it — your kids are growing up in a world where tech savviness is an absolute must. They’re going to use computers, apps, and whatever comes next in elementary school and well beyond. Knowing how to use technology is now a life skill. Now think about some of the age-old pretend play activities kids have played for decades. Many of these teach life skills that are needed in the adult world. Cooking, cleaning, caring for children, going to work, buying items at a store, and all the other pint-sized pretend play activities all translate into grown-up life. Mixing new technology into playtime is the new way to teach kids these adult skills.

As parents we wonder, we worry, we judge what’s better — the open type of play of the past or this new technology-based version? In reality, they both serve purposes. Maybe we need to forget about picking one way or another, and instead focus on blending them together into a new, modern type of childhood play. Things change. Our kids need to roll with those changes, and so do we!

How do you think play has changed since your own childhood? Share your answer and tweet us @BritandCo!

Erica Loop
Erica Loop is a freelance writer living in Pittsburgh. When she's not busy creating kids' activities for her blog Mini Monets and Mommies, you can find her trying to hang out with her teenage son, being chased by her two Olde Boston Bulldogs or teaching a children's karate class (she's a third degree black belt!).
Parenting
More From Parenting