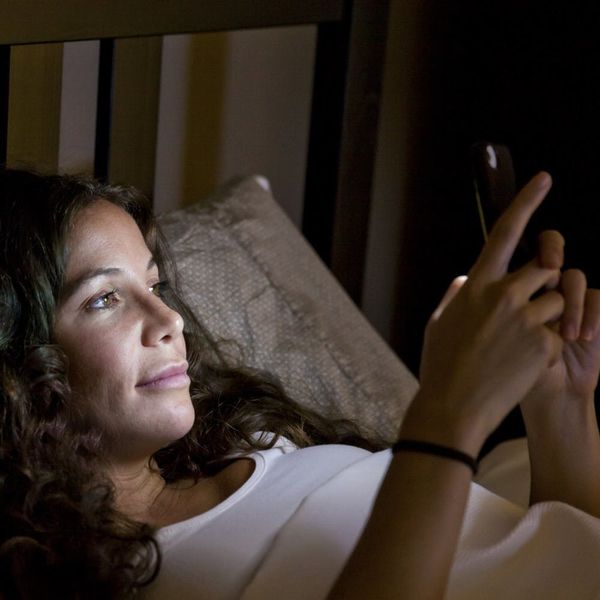 There are a lot of reasons to stop using screens before bed. While binge-watching your favorite shows on a Sunday night might feel relaxing, it’s not so great to do anything involving a bright screen immediately before turning in for some shut-eye. The same goes for scrolling through your social media feeds or catching up on the day’s events via news apps before you hit the hay.

In fact, reading on your brightly lit phone at night could make you temporarily blind. Yup, that’s right. A report in the New England Journal of Medicine details how two women were having strangely similar issues seeing out of one eye. Their doctors discovered it was from consistently reading off of their smartphone screens with one eye open every night — eep! Research has also shown that active technology use (like watching TV) as you’re falling asleep makes getting a full night’s sleep really tough. Passing out while streaming a Netflix show then tossing and turning all night sound familiar? It did to me, so I decided to try cutting all screens out of my life from 10pm on for a full week.

So 10pm might not sound that early, but as a writer, it’s really difficult to turn everything off at a specific time on the dot. I’m often out at events and photoshoots during the day, and nighttime has become my productive time when I edit my stories, collect my thoughts and jot down a to-do list for the next day. Evenings also happen to be the part of my day when I waste tons of time scrolling through my social media accounts and absentmindedly browsing my Instagram Explore page. Sometimes I get great ideas for work from doing this, but mostly it’s just a way to occupy my brain that doesn’t require any effort. I knew cutting off my tech use at night would be tough, but I hoped I’d be rewarded with falling asleep more easily and feeling rested in the morning. Also, that temporary blindness thing REALLY freaked me out. Here’s how it went…

Crap. I forgot I was starting this today. At 10:30pm, I turn off both my TV and my computer and sit on my bed wondering what to do. I realize I haven’t written my to-do list for tomorrow yet, which I normally type out on my phone and email to myself, so I search my room for a pen and piece of paper and write it out neatly. I select a book from my bookshelf that I’ve been meaning to finish for months, and within 30 minutes, I’m fast asleep.

Tonight I make sure to get everything done by 10pm and reluctantly resist the urge to continue watching OITNB. I grab one of the many coloring books I’ve been unable to stop myself from buying (I have a problem), and start filling in the designs. I look up and realize an hour has gone by. I do a face mask, make some tea and get in bed by 11:30pm. Pretty successful night in my book.

I normally meditate in the morning, but today I decide to do it at night since, based on the past two nights, I know I’ll have plenty of time to kill. I spend 15 minutes doing mindful breathing, and then curl up with my book. After an hour or so I’m not really feeling tired, so I get up and walk around my apartment. Hmmm. What did people do before TV? I get back in bed with a magazine and read for another hour before I pass out.

I wake up at 7am — before my alarm — feeling ready to go. This never ever happens to me, so I’m feeling pretty positive about this whole thing. But I have a story due by the end of the day and it isn’t done yet. Yikes! I finish it up around 11pm, missing my screen cutoff by a full hour. I feel pretty guilty, but I’ll have to deal.

I grab drinks and dinner with friends tonight, and other than using my phone to Uber home (#necessary), I do a pretty good job of not using it after-hours. I realize that the easiest way to avoid technology is to hang out with other people and, you know, have conversations without smartphone in hand, and wish I’d figured that out earlier in the week. Oops.

After a super-long week I’m excited to veg out on my couch for the night. I don’t get home until 8pm because I need to fit in a workout, so I only get two hours of TV time. I guess I’ll finish my Netflix binge next week. I’m pretty tired from exercising, so I get in bed and pass out early.

I go out with friends tonight and I make a conscious effort not to look at my phone while I’m with them. The urge to check my Instagram to see what my other friends are up to is strong, but I realize that I left my phone in my bag when I got to the restaurant instead of putting it face down on the table like I normally do. I’m pleased that I’ve seemingly broken this habit, because it’s something that makes me inwardly cringe every time I do it. When I get home I don’t even think about looking at my phone or computer, just plug them in, get in bed and fall fast asleep.

Ultimately, turning off all electronics after dark isn’t realistically something I can do every single night, but trying it out for a week showed me the advantages of making an effort to power down earlier rather than later. Getting to sleep was easier, and I had time to decompress before bed, rather than being bombarded by the constant stream of information that’s always available. Even though the first couple of nights were weird and a bit boring, I felt significantly less stressed and more rested by the end of the week. While I won’t be saying no to my phone, TV and computer at night from now on, I’ll definitely make an effort to shut my tech off early more regularly. The results are totally worth it.

Do you always use your tech at night? Or do you try to power down early? Tell us why @BritandCo!