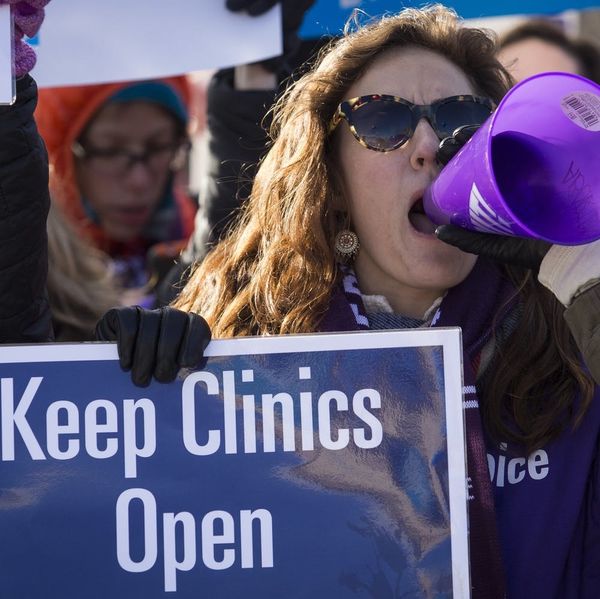 Jessica Farrar, a Texas Democrat and longtime defender of abortion rights, introduced the “satirical” Man’s Right to Know bill (also known as HB 4260) on Friday evening in hopes that her anti-abortion colleagues would wake up to the comparable reproductive health restrictions that Texas women have faced for decades.

According to a press release about HB 4260 sent to Brit + Co, “The bill mimics how legislators, with no formal knowledge of medical norms or practices, attempt to govern women’s health in the Texas Legislature every legislative session.”

Indeed, Texas Republicans have been aggressive in restricting abortion access. Between 2013 and 2016, nearly half of Texas abortion clinics were shuttered after the implementation of devastating Targeted Regulation of Abortion Providers (TRAP) laws, which require abortion clinics to meet many of the same building standards as hospitals and demand that abortion providers obtain admitting access to nearby hospitals. In 2013, there were more than 40 abortion clinics open in Texas; only 19 remain today.

In 2016 the Supreme Court ruled that the TRAP laws were unconstitutional. But by then it was too late for many of the clinics that were forced to close when the state laws took effect. According to a June 2016 Texas Tribune article, there are no abortion clinics open between San Antonio and El Paso, a seven-and-a-half-hour drive.

Not only are there very few abortion clinics in Texas, but abortion providers are forced by law to provide medically misleading information about abortion to patients, and patients are required to wait 24 hours between speaking with a health care provider and actually obtaining an abortion under so-called “informed consent” laws. The “Woman’s Right to Know” pamphlets distributed in Texas discourage women from having abortions, and present false medical information such as a claim that abortions increase the risk for breast cancer.

Farrar’s new bill takes specific aim at these and other restrictions by painting a picture of what men’s health care could look like if they faced the same legislative barriers as women. The Man’s Right to Know law would require men to wait 24 hours before having an elective vasectomy, colonoscopy, or receiving a prescription for those famous little blue pills, Viagra. Like the pamphlets targeted at misinforming and discouraging women, men would be required to read a “Men’s Right to Know” booklet regarding potential risks and concerns related to vasectomies, colonoscopies, and erectile dysfunction prescriptions.

The bill also states that “unregulated masturbatory emissions” would be considered “an act against an unborn child” and would cost men a fine of $100. Men would still be able to occasionally pleasure themselves, but only in a health care facility under the supervision of a health care provider.

In the press release, Farrar states, “It is my personal belief that medical treatment should not change because of gender.” Taking aim again at her Republican colleagues, she continues, “It is the personal belief of some of my colleagues that it should. While this bill is written satirically, there is nothing funny about legislators disregarding medical best practices and, instead, imposing their personal views into law.”

Farrar clarifies in her statement that the bill is not meant to ever become a law, but to send a clear message about the near-dystopian state of reproductive health laws. Will Farrar’s anti-choice counterparts see the light and change their tune about abortions? Given the state’s history of denying abortion access, it doesn’t seem particularly likely.

While Farrar’s bill is a poignant and creative piece of legislative fantasy writing, there’s an urgent need for serious resistance to anti-choice laws and to restore accessible reproductive care in Texas. The Texas Tribune reports that it is unlikely that abortion clinics will ever be restored to pre-TRAP law levels, but remaining clinics need support to stay open, especially given that Neil Gorsuch, president Trump’s pick to fill Antonin Scalia’s seat on the Supreme Court, is anti-choice.

Farrar’s bill will hopefully reignite the pro-choice dialogue in Texas, but only the coming legislative session will reveal how effective “Man’s Right to Know” will be.

What do you think of the “Men’s Right to Know” bill? Let us know on Twitter @BritandCo.

Elizabeth King
Elizabeth King is a politics, history, and culture writer based in the Twin Cities. She is generally pretty cranky but still enjoys traveling, music from the early 2000's, and plotting the resistance. Feel free to say hi on Twitter at @ekingc or check out some of her work at www.elizabethcking.com.
Politics
Politics
Politics Womens Health