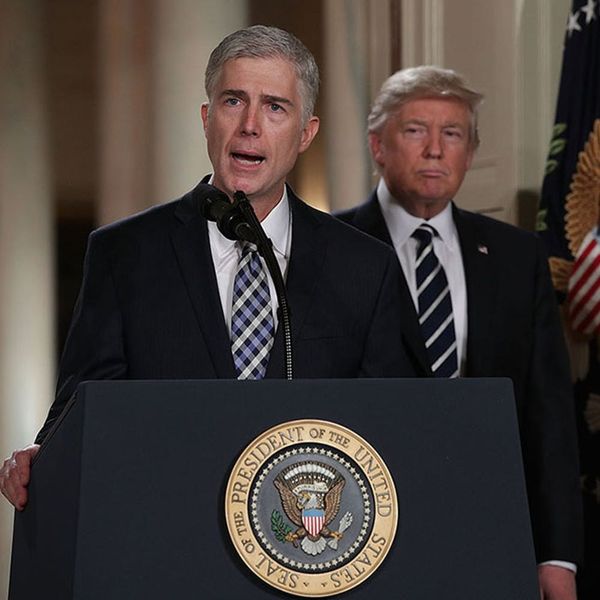 On Monday night, Trump announced his much-anticipated pick for a Supreme Court nominee. Considering his remarks about appointing a Justice who would work to help overturn Roe v. Wade, women’s organizations awaited the news with bated breath. And when Neil Gorsuch came out of the wing at the White House to accept Trump’s nomination, they didn’t exactly let out a sigh of relief. Here are the thoughts and statements of three women’s organizations on what they think of Gorsuch and why.

In a statement emailed to us by NARAL‘s President Ilyse Hogue, Hogue writes, “With Judge Neil Gorsuch, the stakes couldn’t be higher when it comes to women and our lives. Gorsuch represents an existential threat to legal abortion in the United States and must never wear the robes of a Supreme Court justice. With a clear track record of supporting an agenda that undermines abortion access and endangers women, there is no doubt that Gorsuch is a direct threat to Roe v. Wade and the promise it holds for women’s equality. The fact that the court has repeatedly reaffirmed Roe over the past four decades would no longer matter, just as facts often don’t seem to matter to President Trump. Confirming Gorsuch to a lifetime on the Supreme Court would make good on Trump’s repeated promises to use his appointments to overturn Roe v. Wade and punish women. NARAL and our 1.2 million member-activists call on the Senate to reject Trump’s nominee using any and all available means, including the filibuster.”

Yesterday, we chatted with Lisa Maatz, the VP of government relations and advocacy at AAUW, about the nomination. Here are her thoughts:

“AAUW has grave concerns about this particular nominee and part of it really stems from his hostility toward settled law and precedents. He does not appear to be someone who understands the importance of Roe v. Wade, yet that’s a law that’s been around for a long time. The whole point of having precedents is you don’t jerk a society back and forth.

In issues regarding women’s rights, policing and reproductive health, he does not seem to have that appropriate respect, which to me is really a tougher question. So to us, our serious concerns really stem from a lack of respect toward precedent, and as a result, he can be a real stumbling block to the principles that play into our checks and balances. We expect a full and thorough vetting. We expect him to be grilled and answer questions honestly and forthrightly and will be looking for that kind of candidness in making a position. But for now, we are gravely concerned.

[If you’re opposed] this is the time for folks to be speaking out. Call the phones on Capitol Hill. People have been calling about so many different issues that some of the phones have literally just shut down. Technology hasn’t been able to deal with the volume. That is what democracy looks like. For those who read the information about Gorsuch and say ‘You know what? This is not the person I want on the Supreme Court for the next four years.’ They need to call their Senators and they need to call them now.”

The United States of Women

In an emailed statement about the Gorsuch’s nomination, the USOW team writes, “President Trump nominated Neil Gorsuch to fill the vacant Supreme Court seat. And while the Supreme Court can feel removed from our daily lives, their decisions can have a direct impact on all of us. In the past few years, we’ve seen landmark cases on marriage equality, access to safe abortions, contraceptive care, immigration policies, affirmative action, employment discrimination, voting rights, the list goes on. The decisions made by the Supreme Court this year will impact our lives for generations.

We will learn more over time, but the one thing to know about Gorsuch right off the bat is he is no friend to women. He has an alarming history of interfering with reproductive health, blocking access to birth control and siding with corporations over their female employees.

Despite this step backward, remember that your voice matters. In the past twelve days, we’ve been heartened to see so many people across the country demonstrating, protesting and standing up for the civil rights that all Americans deserve. The road ahead will be long, and it will be challenging, but we’re in this fight together. And as this nomination moves forward, our representatives need to hear from us.”