This Book Could Help Unlock Your Creativity 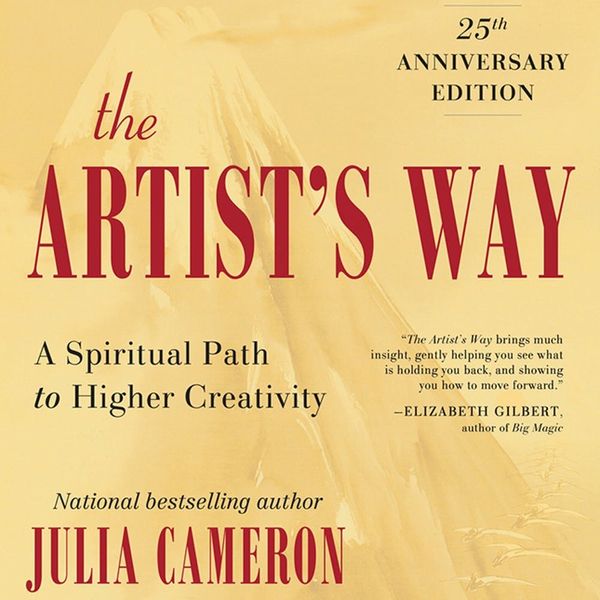 When I first put out feelers for an article about Julia Cameron’s 27-year-old book, The Artist’s Way ($17), I had a feeling I’d be getting responses from all sorts of creative types who’d had positive experiences with the classic 12-week program for unblocking creativity. What I didn’t expect was that everyone I spoke to about the book seemed to have an extreme opinion on the program, Cameron’s writing style, and the exercises themselves. The Artist’s Way offers up a straightforward, somewhat regimented process that would, in theory, lead us to more fulfilling creative lives. Whether Cameron’s guidance will provoke you to new heights of artistic achievement or leave you feeling frustrated may have something to do with the creative habits and personal beliefs you’ve already dialed into.

“Progress, not perfection, is what we should be asking of ourselves,” Cameron repeats in various iterations throughout the book. In regards to encouraging readers that they are just as capable as anyone else of getting up and doing the work they so admire, one could argue that The Artist’s Way is more successful than any other book of its kind. The idea of getting started can feel heavy, and the prospect of following through to completion can be a creative drag. The book provides an equal mix of pragmatic pathways to short-circuit the urge to quit on good projects, and a measured dose of grace for the inevitable moments when our work doesn’t align with our expectations.

But the tasks themselves can be time-consuming. Sean Collins, a programmer based out of Boulder, CO, has been making his way through the book for the past several months. He says that while the book has motivated him in some ways, the program can be more labor-intensive than he anticipated. “The tasks are tough, and I’ve only been doing two or three of them per week,” he says. Collins has committed to the book’s much-lauded practice of Morning Pages, which Cameron advocates to clear the brain first thing in the morning in preparation for creative work. Collins says the exercise, for which he covers three pages of full-size notebook paper, takes him up to an hour each day. This hour is in addition to doing the “Artist’s Dates” most weeks (the practice of making time for yourself every week to do something “enchanting” to nourish your creativity), the suggested readings, and some of the other tasks Cameron outlines in the book’s weekly sections. For many, the sheer time commitment of The Artist’s Way program might be frustrating.

This is not to say the tenets of the book are, well, untenable. I had dozens of people email me swearing that the book unlocked a creative energy in them that nothing else came close to. For people who are committing to streamlining their routine to accomplish more, and for those who are looking to work their way out of a creative rut, The Artist’s Way suggests a structure that, at the very least, can lead readers to a more disciplined consideration of their work. Fostering relationships with fellow creatives and building confidence around the work you produce are solid, nuts-and-bolts outcomes that readers can sign on with and objectively measure at the completion of the program. Cameron’s fixation on capturing artistic skill emphasizes, in her words, “mystery, not mastery.”

Ilana Masad, a fiction writer, editor, and book critic, feels there are aspects of the program that are helpful — if you can accept certain tradeoffs. “I really like Morning Pages,” Masad says. “I think those are possible for most people, though of course often you have to give up on things like sleep or relaxation for such exercises to take place.” But Masad notes that there’s a sizeable catch to accepting Cameron’s concepts wholesale. “Cameron basically says her method works for everyone, and that if you, the reader, don’t click with some of it, it’s because you’re resisting,” she says. “It seems to imply that no one is smart or thoughtful or has a sound sense of judgment unless they wholeheartedly agree with Cameron’s way of doing things.”

A sizeable portion of Cameron’s philosophy is built on ideas that go full-tilt toward the spiritual, which makes some readers, including Collins and Masad, uncomfortable. “I didn’t know [about] Cameron’s focus on the ‘Great Creator’ or God… at all before starting,” Masad says. “I discovered it while reading and have become more and more uncomfortable with it — because the central focus of [Cameron’s] argument often seems to be that we all have the potential for creativity because of that idea of a great creator.” For plenty of potential followers of The Artist’s Way, this line of thinking just doesn’t wash.

For readers who are simply looking for a how-to guide to stumble out of the creative wilderness and into better habits, The Artist’s Way‘s hefty legacy (and over 1,000 Amazon reviews) speaks for itself. With applications in a wide variety of disciplines and a gentle, enthusiastic narration by Cameron, the book offers solid starting strategies for seeing ourselves as artists and our art as a valuable, needed contribution to the world. Offering ourselves a realistic framework to accept the book’s merits, and being honest about its potential limitations to any personal philosophy we may hold, can only enhance our experience of what the book has to offer.

Have you ever tried The Artist’s Way? Tell us about it @BritandCo!

From Your Site Articles
Kathryn Watson
Kathryn Watson is a freelance culture writer and developmental editor living in New York City. You can find her on Twitter @whatkathrynsaid.
Artist
Creativity
Artist Books Productivity
More From Creativity