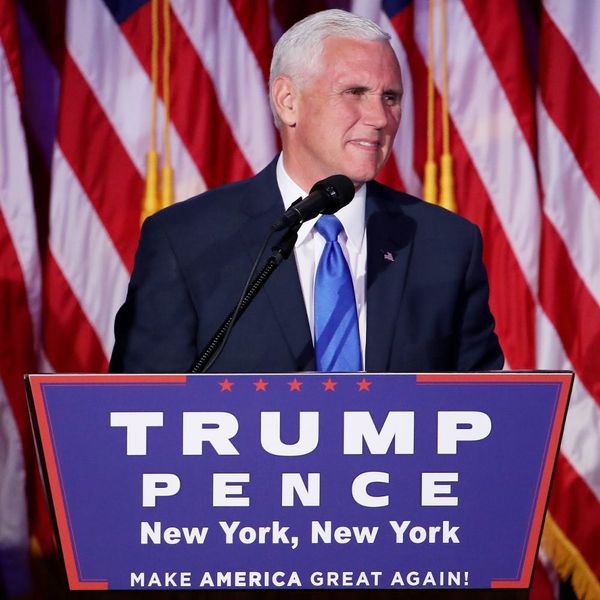 It’s practically impossible to snag tickets to Hamilton (can we get a Hollywood adaptation, already?!) but Vice President-Elect Mike Pence (who recently had 20,000+ donations made to Planned Parenthood in his name) must know something we don’t, because he showed up at the Richard Rodgers Theater last night to take in a performance. Try as he did to slip in and out unnoticed, however, the cast was NOT having it.

Singling him out from the crowd and addressing him directly, cast member Brandon Victor Dixon (who plays our third VP ever, Aaron Burr), delivered a powerful speech that was actually written especially for the occasion by the show’s creator, Lin-Manuel Miranda (who has signed on for the new live-action Little Mermaid), with help from director Thomas Kail, lead producer Jeffrey Seller and the entire cast, reports the New York Times.

“Vice-President-elect Pence, I see you walking out, but I hope you will hear us, just a few more moments,” Brandon began before launching into an empowering monologue that soon had everyone in the audience (sans our new VP, who did leave) clapping and cheering.

Tonight, VP-Elect Mike Pence attended #HamiltonBway. After the show, @BrandonVDixon delivered the following statement on behalf of the show. pic.twitter.com/Jsg9Q1pMZs

“We, sir, we are the diverse America who are alarmed and anxious that your new administration will not protect us, our planet, our children, our parents, or defend us and uphold our inalienable rights, sir,” said Brandon. “But we truly hope this show has inspired you to uphold our American values and to work on behalf of all of us, all of us.”

Proud of my @HamiltonMusical peeps. Y'all make me So Very proud.

Lin-Manuel couldn’t help but share his joy like a proud parent, reminding everyone “that ALL are welcome at the theater.”

Proud of @HamiltonMusical. Proud of @BrandonVDixon, for leading with love.
And proud to remind you that ALL are welcome at the theater.

President-Elect Donald Trump, however, was not amused, and actually seemed to play off Lin-Manuel’s own words when he voiced his disappointment on Twitter.

The Theater must always be a safe and special place.The cast of Hamilton was very rude last night to a very good man, Mike Pence. Apologize!

“The Theater must always be a safe and special place,” wrote Mr. Trump. “The cast of Hamilton was very rude last night to a very good man, Mike Pence. Apologize!”

Hmm… we wouldn’t hold our breath for that.

What did you think of Brandon’s powerful speech? Tweet us @BritandCo.

Barbara Pavone
Barbara Pavone is a pop culture-obsessed writer based in beautiful (but ridiculously cold) Montreal, Canada. When she's not working, she's sipping on a Pimm's Cup and daydreaming about her celebrity hero, Saint West.
Controversy
Politics
Controversy Politics