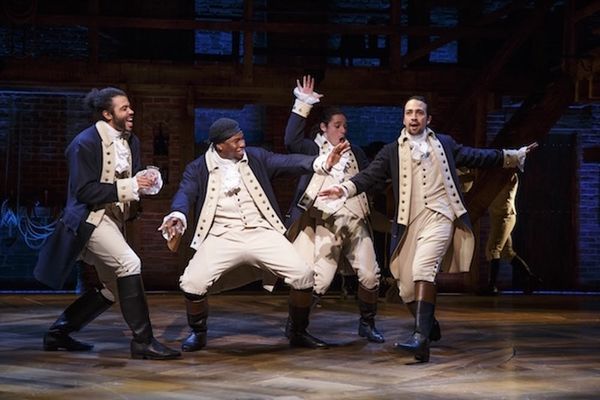 With all the chatter of the Hamilton stars leaving the show — Lin-Manuel Miranda, Leslie Odom Jr. and Phillipa Soo have had their final curtain call, while Daveed Diggs and Renée Elise Goldsberry have announced end dates — we can’t help but mourn their departure with some wishful thinking. When the big-screen Hollywood adaptation happens (and you KNOW it will happen), here are some names we’d like to throw into the ring:

1. Marquis de Lafayette: In an ideal world, the full original cast would come back for the movie. But we live in a less-than-perfect world, so if we have to settle for just one original cast member, please let it be Daveed Diggs. It would just be easier to get this talented, fast-rapping, beautiful human being to return for the movie instead of trying to find someone else who can spit 233 words in 43 seconds in a hokey French accent while doing some insane acrobatics on stage. Seriously, just try. (Photo via Dimitrios Kambouris/Getty)

2. Thomas Jefferson: Daveed Diggs plays both Jefferson and Lafayette in the musical, being blessed with the talent to portray such different musical styles and characters. But in a film, it could be confusing to audiences to see the same person act as two different people. So we’ve decided that Jefferson’s charisma, cockiness and just a hint of playfulness would be best portrayed by our resident handsome human, Idris Elba. Only question left now is: Can Elba sing? (Photo via Mike Coppola/Getty)

3. John Laurens: Hamilton’s best friend was more of a proponent for abolition than any other character in the musical, and had an intensity and playfulness about him that’s not unlike Lin Manuel Miranda himself. Michael B. Jordan has the same youthfulness as Anthony Ramos, yet also possesses the steely determination of someone mature beyond his years. If you’ve never seen Fruitvale, go watch it. It’s an amazing movie and Jordan was an eye-opener in it. (Photo via Michael Buckner/Getty)

4. George Washington: For the gravitas of the first founding father, we are torn between rapper Common, who was amazing in Hell on Wheels and sings, and Chiwetel Ejiofor, who is amazing in everything. We probably lean more towards Chiwetel Ejiofor, but discuss among yourselves. (Photos via Pascal Le Segretain/Getty and Tristan Fewings/Getty)

5. Hercules Mulligan: How completely badass is that name? And how completely awesome is this character? Okieriete Onaodowan’s talent and musicality is raw and physical, and we believe we saw that rawness in O’Shea Jackson Jr., AKA Li’l Ice Cube, in Straight Outta Compton.

6. King George: Someone suggested Benedict Cumberbatch — and sure, it would be funny to see him hamming it up for Ham, but we would prefer to go with Ewan McGregor. He sings, he has a sense of humor about himself and he has a live-wire quality that makes him seem like he could fly off the handle at any time (Remember Trainspotting?). McGregor would have big shoes to fill though; stage veteran Jonathan Groff has a HUGE following. (Photo via Mike Windle/Getty)

7. Angelica Schuyler: With so many talented female actresses out there and only three lady roles in Hamilton, pinning a dream talent down for each is a bit tougher. But there’s one thing we know for sure: We would love to see Gina Torres as Angelica. Think of her as Zoe in Serenity: She’s strong and has a sense of world-weariness — like she realized three fundamental truths at the exact same time. (Photo via Cindy Ord/Getty)

8. Peggy Schuyler/Maria Reynolds: This was a dual role in the musical, both played by Jasmine Cephas-Jones, and while we said earlier that the Lafayette/Jefferson role would be weird if both were portrayed on screen by the same person, the Peggy parts are very brief (“… and Peggy!”). And we feel that Rosario Dawson’s smokey growl would work so well as Maria Reynolds seducing Hamilton. (Photo via Frederick M. Brown/Getty)

9. Eliza Schuyler: Hamilton’s first lady was by and away the hardest for us to cast. Phillipa Soo is so perfect in embodying love for her husband in the first act and quiet fury in the second. Gugu Mbatha-Raw would be a suitable fit for her, as her previous work (Belle and Beyond the Lights) have shown her range. (Photo via Frazer Harrison/Getty)

10. Aaron Burr: This pick for Aaron Burr might be controversial, as the public appears to be split between loving him and… well, not. But we would really love to see Donald Glover as the man who wants to be in the room where it happens. Glover actually seems more like Hamilton; he appears to want to do it all — comedy writing, acting, rapping, singing. But there is also a hunger in him that likely will not be satisfied, which is so perfectly Burr. Whoever plays Burr has to be able to sing — “Wait for It” is one of the best songs in Hamilton — and Glover can definitely sing. Even the eyebrow raise this pick elicits is the reaction Burr gets from his constituents, his colleagues and his life-long nemesis.

11. Alexander Hamilton: We originally wanted Donald Glover to play the 10-dollar founding father without a father, but then we decided that Hamilton needed to be pure charisma — as Lin Manuel Miranda is. We, as an audience, need to immediately be on his side from the beginning to the end, even when he is cheating on Eliza or if his singing isn’t as strong as the other cast members (Sorry, LMM. But you’re a genius and a national treasure, so you’re doing alright.)

So we’ve decided that it should be Oscar Issac. The man can do no wrong in our eyes — he oozes charisma no matter what role he takes, and his range is incredible. Issac can be scarily intense (Ex Machina, Drive), an action star (Star Wars) or a struggling folk musician being shuttled around town (Inside Llewyn Davis).

Another completely crazy suggestion we’d like to throw out there is Janelle Monae. We don’t know if she acts, but if she does, how cool would it be? She’s a real visionary with an electrifying energy about her. It was an inspired decision by LMM to portray the Founding Fathers as different races; wouldn’t it be great if a woman could play Hamilton as well? (Photos via Andrew H. Walker/Getty and Dimitrios Kambouris/Getty)