The Ultimate DIY Piñata Guide for Your Next Party 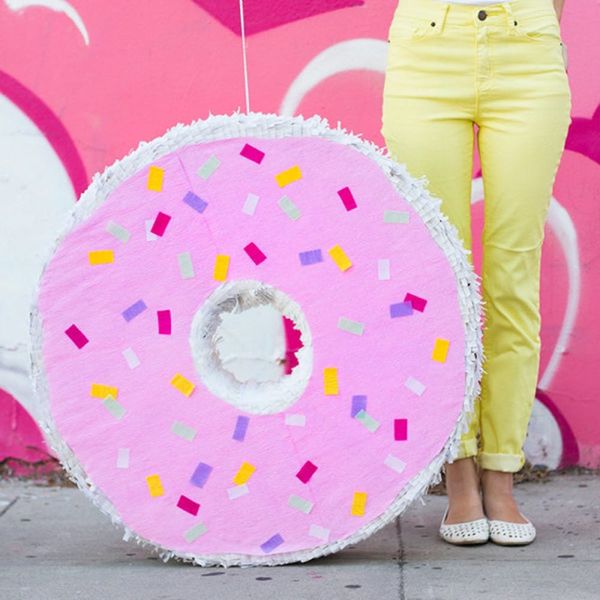 A good hostess knows that the most crucial item on any party planning checklist (okay, after the food and booze) is a party piñata DIY. Once you’ve chosen the theme, invitations and balloons, your next move should be to figure out what kind of piñata you should feature. Whether you’re throwing a 30th birthday bash, a kid’s birthday party or a bridal shower, your flair for creativity will help you craft a piñata that not only fits the theme, but is sure to be a *smash* hit. Scroll on to check out some of the most popular piñata DIYs to suit any party theme.

1. DIY Pretty Kitty Pink Piñata: The design darlings over at Best Friends for Frosting really know how to craft on the cute side. What six-year-old (ahem, even 26-year-old) wouldn’t adore hanging this pink fringe kitty head piñata at their party? Stuff the kitty head with bubblegum and wrapped pink rock candy to help you put the “fun” in functional decor. (Via Best Friends for Frosting)

2. DIY Olaf Piñata: Create an Olaf piñata for a child’s party, to keep those Frozen fans going strong. A little bit of fluff, cardboard and, of course, warm hugs turn this piñata into one celebratory snowman. (via Munchkin Time Blog)

3.DIY Fringe Monogram Birthday Piñata: When celebrating a child’s birthday, think about crafting a piñata to represent their first name and do so in colors that they love. Long after the party is over, the child can keep the piñata as both a memento and as a decoration for their bedroom. (via Best Friends for Frosting)

4. DIY 30th Birthday Donut Piñata: What 30-year-old wouldn’t want a donut-themed birthday party? Take this yummy celebration to the next cake tier with a DIY sprinkled donut piñata. Certainly, it will make all your friends hungry for cake. (via Studio DIY)

6. DIY Giant Disco Ball Birthday Party Piñata: Your answer to throwing an epic 30th birthday shindig is this giant tinsel-covered disco ball piñata. Turn up the tunes, cue the lights and get ready to boogie on down. It’s going to be one memorable 30th birthday! (via Studio DIY)

7. DIY Pink Pineapple Piñata: Plan your next bridal shower brunch in pink tones by DIYing a punchy yet fancy pineapple party piñata. The pink pineapple lady piñata is almost too demure to crack open — at least before the mimosas start flowing. (via Best Friends for Frosting)

8. Engagement Ring-Inspired Piñata: Ladies, it’s okay to get down and fancy during your bridal brunch. Nothing is fancier than a sparkling diamond ring-shaped piñata. Exactly how many karats does it take to paper-machè an enormous piñata? Only the proposal will tell. (via Knot Weddings)

9. DIY Cotton Candy Piñata: Just like donuts, cotton candy is a party staple for adults and children alike. DIY this rather large cotton candy-inspired piñata to use as a decoration at any bridal shower luncheon for that extra pop of pink. (via Studio DIY)

10. Traditional Gold Piñata: Yes, Piñatas are wedding crashers — and are a much-welcomed decoration. If you’re more traditional, opt for a time-honored Mexican donkey piñata for your Big Day, spray painted in metallic tones, like gold. Add your reception colors to the donkey’s collar to really make your wedding day piñata pop! Olè! (via Camille Styles)

11. Romantic Latin-Inspired Wedding Piñata: Hanging refined gold foil fringe on your piñata at your wedding reception seems like an everlasting detail for an everlasting love story. If you’re worried your sentimental side might be tempted to keep the heart intact, have your MoH hand you a glass of Champagne, a bat and a reminder that the memories will last forever. (via 100 Layer Cake)

12. DIY Piñata + Guest Book: Celebrate the happy couple’s big day by DIYing a wedding piñata. Instead of filling this paper party bundle with candy, fill it with good vibes, notes and jokes for the newlyweds to open on their honeymoon. Pro tip: Money would look just as good inside this piñata. (via Something Turquoise Blog)

13. DIY Stork Baby Shower Piñata: You will officially be the baby shower planning pro when creating this stork-inspired piñata. Save a bit of time to stuff the piñata with either pink or blue wrapped candy, if you’re planning a gender reveal at the event’s end. ( via The House That Lars Built Blog)

14. Baby Safari Animal-Inspired Piñata: What mom-to-be wouldn’t want a baby safari-themed baby shower? Take the joy to the next level, with a sweet mini zebra piñata DIY. (via Style Me Pretty)

15. DIY Baby Unicorn Piñata: If you’re in a baby shower pinch, upgrade a My Little Pony piñata into a baby unicorn piñata. After a few magical touches (and some metallic foil), your unicorn piñata will begin to take shape. (via Little Inspiration)

Still in a partying mood? Pin with us on Pinterest for more party fun ideas.