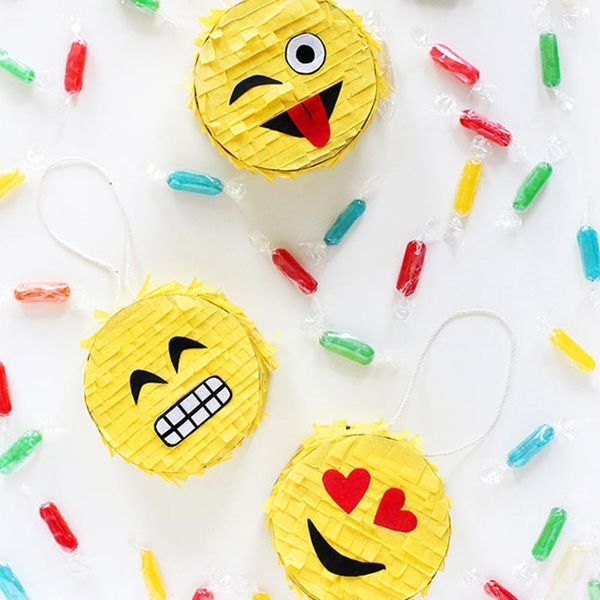 There are a few things every kid’s summertime birthday party needs: a few DIY backyard games, a dessert table complete with nom-worthy popsicles and an epic theme. But don’t forget about a piñata to kick the fun up a serious notch or two. If you’re throwing your little one the ultimate birthday bash this summer, put your DIY skills to the test and make a piñata that fits the theme. Whether you opt for a donut piñata or a bursting piñata heart, it’ll totally bring some fun to the party. Scroll through to check out our faves for your munchkin’s big day.

1. DIY Hot Air Balloon Piñata: You can’t go wrong with a hot air balloon piñata for your kiddo’s Up-themed birthday party. With a little rainbow tissue paper and some leftover cardboard, you’ll be well on your way to a DIY piñata that’s just as colorful as it is adorable. (via The House That Lars Built)

2. DIY Snow Cone Piñata: Add this piñata to your snow cone-themed party, because nothing screams *summer* like some sweet and refreshing shaved ice. Use white tissue paper for the cone, and let your kiddo pick out their favorite color for the top. (via Brit + Co)

3. DIY Mini Animal Piñatas: Short on space? No problem. Opt for a few mini piñatas for the big day. These colorful cuties will be the perfect addition to your little one’s par-tay. (via A Black Bird’s Epiphany)

4. DIY Lion Piñata: What kid wouldn’t want a safari-themed party this summer? Take their celebration to the next level with this DIY lion piñata. It’ll *definitely* make the kiddos roar. (via Handmade Charlotte)

5. DIY Minion Piñata: Minions are basically foolproof when it comes to party themes, and this option is *super* easy to make. Simply cover a cereal box in yellow tissue paper and blue card stock, add a couple of eyes and get ready to have the cutest piñata in town. (via Raising Whasians)

6. DIY Popsicle Piñata: When you think of summer, one of the first things that comes to mind is enjoying a yummy popsicle to cool off. Whip up this DIY to top off your already epic popsicle-themed birthday bash. (via Think.Make.Share.)

7. DIY Watermelon Piñata: Just like popsicles, watermelons are an all-time summer fave with the kids. DIY these little piñatas to use as decoration, or you can send them home as an adorable (and easy!) party favor. (via Minted)

8. DIY Roller Skate Piñata: That moment your kids get a roller-skating party invitation in the mail is probably the highlight of their week. Amp up your kiddo’s skating rink bash with this amazing roller skate piñata. (via Oh Happy Day)

9. DIY Dinosaur Piñata: Dino-obsessed peeps, rejoice! Save a little extra time before the party to create this piñata, and then admire your creation. Don’t forget to snap a photo before the party, because once you check this off your to-make list, you’re officially a DIY party pro. (via Pretty My Party)

10. DIY Beetle Bug Car Piñata: Your answer to the ideal dream car as a munchkin was probably a colorful beetle, which makes this piñata a no-brainer for the little one’s b-day bash. You should totes make two of these, because you’ll want to have one at your birthday party too ;) (via The House That Lars Built)

11. DIY Unicorn Piñata: If you’re more of a last-minute DIYer, then this is the piñata for you. Snag a classic donkey piñata from the party store and give it a serious upgrade using a roll of iridescent cellophane. Your piñata will morph into a unicorn in just a few simple steps. (via Oh Happy Day)

12. DIY Monster Piñata: Sometimes the little ones want in on the DIY fun too. Put together the base of the piñata and let your kiddos decorate it however they want. It’ll turn into the cutest little monster once they put their magic touch on it. (via Giddy Giddy)

13. DIY Emoji Piñata: Make a handful of minis or opt for a jumbo size of your kiddo’s fave emoji. Either way, the tech-obsessed kids will look like the heart-eyed emoji when they take one look at these. (via I Spy DIY)

14. DIY Donut Piñata: Donut you love this piñata? Just be sure to provide a few of the treats IRL on the dessert table — once the kids see your creation, they’ll be sure to crave the real deal. (via Brit + Co)

15. DIY Cloud Piñata: Your child will be on cloud nine when they see that you made this piñata for their birthday. Don’t forget to finish it off by gluing on a bunch of streamers. It gives it that extra touch that shows you really are the ultimate party-thrower. (via Think.Make.Share.)

16. DIY Simple Number Piñata: When in doubt, making a simple number piñata for your little one’s party is always the way to go. If you want to make it a little more unique, add patterned tissue paper, like this polka dot option. (via Project Nursery)

17. DIY Darth Vader Piñata: Pick up a pack of black crepe paper at the craft store and get ready to get your DIY on. The only thing cooler than the real Darth Vader is a piñata shaped like him. (via Homemade by Jill)

18. DIY Cactus Piñata: Fill these mini cacti with a little gift for each kid that’s coming to the party. Make a few extra — they’ll work great for any adult party you host this summer. (via Oh Happy Day)

19. DIY Beauty Piñatas: If your little one loves to play beauty parlor send their party over-the-top with DIY brush, hairdryer and scissors piñatas. Fill the piñatas with mini nail polishes and lip balms to keep the theme going strong. (via The House That Lars Built)

Are you throwing your kiddo a birthday party this summer? Follow our Pinterest for even more inspo.

Samantha Tagher
Sammy was born and raised in the great state of Kentucky and attends the University of Kentucky, where she studies Marketing and Merchandising, Apparel + Textiles. She loves a great DIY project, is a loyal Apple customer and has a *slight* obsession with nail polish, office supplies and, of course, her seven pound toy poodle, Buddy.
Birthday
Party
Birthday DIY Projects Party Ideas
More From Party