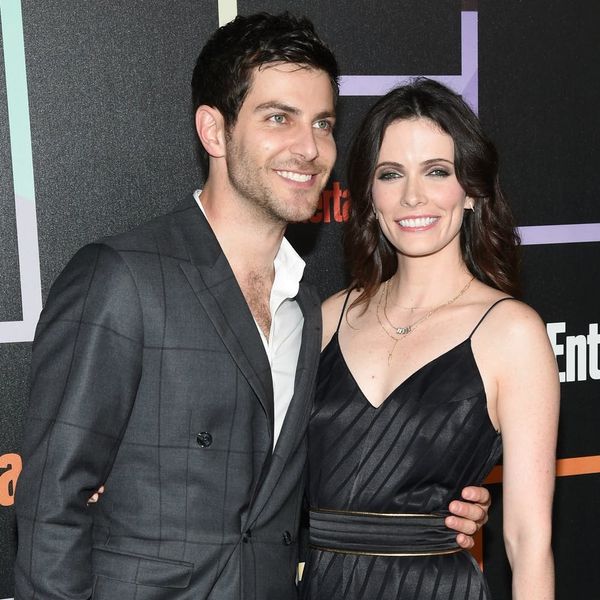 San Diego Comic-Con is the perfect place to show off your DIY costume skills, hang with celebs, watch exclusive movie trailers… and profess your love? Grimm co-stars David Giuntoli and Bitsie Tulloch sure thought so, as they decided there was no occasion more perfect to share a huge piece of news with fans: They’re engaged!

The couple, who have been dating since 2014, deserve some sort of award for being the best secret keepers of all time (they’ve been engaged since April!), but the cat’s certainly out of the bag now: While attending the Grimm panel, Bitsie wore her HUGE ring for the first time out in public, and it pretty much stole the show.

Just in case the gigantic rock on her finger wasn’t telling enough, Bitsie also confirmed the news during a Facebook Live chat with Entertainment Tonight. Gushing over her stunning ring, she revealed that “it’s over a hundred years old! The diamond is from the 1890s and the setting is from 1915, which is the year my grandfather was born.”

David is obviously a man who knows his jewelry! “I had to dig it out of the grave!” he joshed, before adding: “My little joke was because we were boyfriend and girlfriend on the show, everything in the marriage will be a tax write off.”

Happy and Sleepy at the @Entertainmentweekly #comiccon photo shoot.

Bitsie also took to Instagram to share an adorbs behind-the-scenes photo of herself cozying up to her fiancé during their ET Grimm press stop. “Happy and Sleepy at the @Entertainmentweekly #comiccon photo shoot,” she wrote.

Cutest. Dwarfs. Ever. Congratulations, you two!

What do you think of Bitsie’s ring? Tweet us @BritandCo.

Barbara Pavone
Barbara Pavone is a pop culture-obsessed writer based in beautiful (but ridiculously cold) Montreal, Canada. When she's not working, she's sipping on a Pimm's Cup and daydreaming about her celebrity hero, Saint West.
Engagement
Entertainment
Engagement Engagement Rings
More From Entertainment