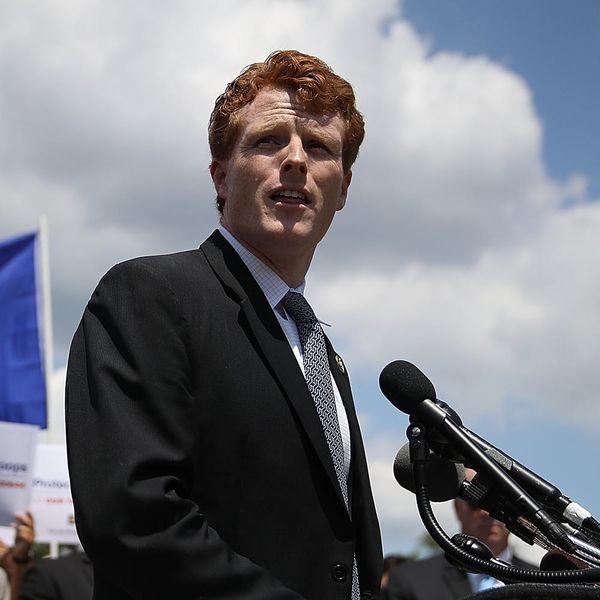 As national outrage continues to spread over the Trump administration’s “zero tolerance” policy of separating and detaining families who cross the border seeking asylum, some politicians are working on new legislation. Earlier this month, Democratic Senator Dianne Feinstein of California introduced a bill for the “Keep Families Together Act,” which would limit family separation at the border.

While the act would put an end to the “zero tolerance” policy created by Attorney General Jeff Sessions, it would mean that families would be incarcerated, just not separately. Some activists are concerned that this new law would not necessarily decrease incarceration or deportation of people seeking asylum. The bill seeks to “limit” family separation, but there are a number of exceptions that would allow for children to be taken from their parents. Still, it’s an improvement.

A number of the 30 Democrats who signed on to the bill are up for re-election this year, including Feinstein. Here’s a look at a few of those who have signed on to the Keep Families Together Act and what they’ve said about the “zero tolerance” policy.

Feinstein is up for re-election again this year, though she did not receive her party’s official endorsement. Since Trump took office, Feinstein has consistently voted against conservative immigration policies. Of the “zero tolerance” policy, Feinstein recently said on MSNBC, “This is the United States of America. It isn’t Nazi Germany, and there’s a difference.” (Photo by Mark Wilson/Getty Images)

Former Democratic presidential candidate Bernie Sanders is up for Senate re-election as an Independent in Vermont this year. He also signed on to Feinstein’s bill and has consistently decried the Trump administration’s immigration policies, from rolling back DACA to the Muslim ban to expanding the border wall. Sanders has called the separation of immigrant children and parents “inhumane and un-American.” (Photo by Tasos Katopodis/Getty Images for MoveOn.org)

Senate veteran Elizabeth Warren is also seeking re-election in 2018. Like Feinstein and Sanders, Warren has voted along party lines under Trump. In addition, Warren and another Democrat, Ohio Senator Sherrod Brown, have pressed Trump’s current nominee for the Consumer Financial Protection Bureau because of the nominee’s possible role in implementing the “zero tolerance” policy, according to Mother Jones. In a letter to Kathy Kraninger, the current associate director for the Office of Management and Budget and nominee to direct the Consumer Financial Protection Bureau, Warren called the policy “cruel” and asked to know what role Kraninger played in carrying it out. (Photo by Mark Wilson/Getty Images)

Tim Kaine, who ran as Hillary Clinton’s vice presidential nominee in the 2016 election, has also signed on to the new bill. In a statement announcing the Keep Families Together Act, the Virginia senator called the bill “an effort to protect kids from unnecessary harm by keeping families together and putting in place safeguards for children who have been separated from their parents.” (Photo by Chip Somodevila/Getty Images)

Congressional Hispanic Caucus members yell at Trump about the “zero tolerance” policy as he walks by after his meeting with GOP lawmakers at the Capitol. pic.twitter.com/YMva974pnq

On Tuesday morning, five members of the Congressional Hispanic Caucus of the House of Representatives protested directly in front of President Trump on Capitol Hill. CNN reports that Representatives Juan Vargas, Lucille Roybal-Allard, Nanette Diaz Barragan (all three from California), Michelle Lujan Grisham of New Mexico, and Adriano Espaillat of New York confronted Trump with signs and shouts. Vargas shouted at Trump to “stop separating our families.” All five of these Representatives, as with every member of the House, will be up for re-election in the fall.

Last week, longtime congressman and civil rights activist John Lewis and a group of other Democratic members of the House blocked the entrance to the Ronald Reagan Building (the building where US Customs and Border Protection is headquartered). Along with Luis Gutierrez, Joe Crowley, and others, Lewis and a crowd that gathered in support of immigrant families chanted, then marched.

On Wednesday, speaking to Gutierrez, Lewis said he was willing to get arrested while protesting the “zero tolerance” policy if necessary. (Photo by Rick Diamond/Getty Images)

Joe Kennedy, who has been in office as a representative for Massachusetts since 2013, went to Tornillo, Texas, over the weekend to speak out against child detention centers. CBS in Boston reports that Kennedy called the child detention centers “monstrous” and said: “It has to stop. Period.” (Photo by Justin Sullivan/Getty Images)