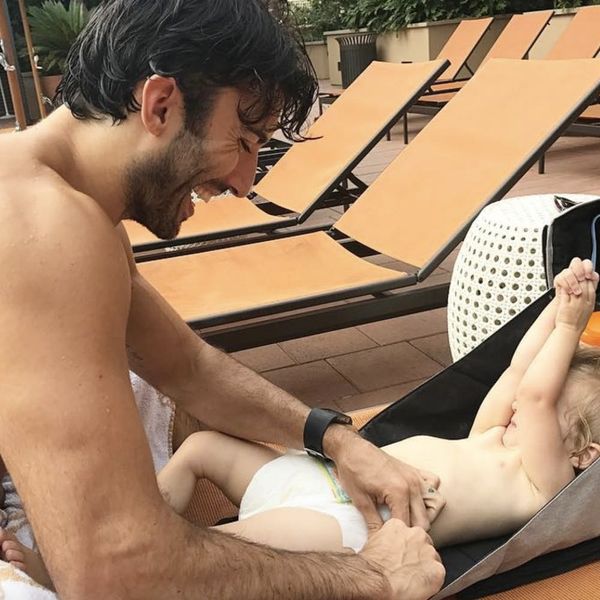 If you ask 100 people what being a man means in modern day America, you will most likely receive 100 different answers. The reason for this is simple: As our culture continues to evolve beyond the hard division between men and women, masculinity has become more and more of a self-defined construct.

Every person may have a different view on what being a man entails, but not a lot of men are encouraged to open up and talk about their shifting and varied roles in today’s society. That’s exactly what Jane the Virgin star Justin Baldoni wants to address through his new show, Man Enough.

Baldoni is creating the show to break down common stereotypes and misconceptions about men and, most of all, to get men to share with each other.

When you and your TV baby mamma show up to work wearing the same shirt. Grateful to be standing next to a #phenomenalwoman who I get to witness stand up for so many. #twinning #genderequality #feminist

“I think I just wanted to come out and explore what it means to be a man in a new way because no one talks about this stuff,” Baldoni tells Brit + Co during a break from filming Jane the Virgin. “It’s very rare to see men open up and talk… and I think that there’s a lot of men out there that want to but just don’t have permission.”

The show, which will premiere in November, will be an open forum between Baldoni and a rotating panel of five men. Similar in concept to shows like The View, Baldoni’s show will be based on conversation and discussion.

“This show is in no way going to be saying that men have to be a certain way,” he says. “This is not a normal talk show: This is a conversation show. This is not me dictating what I think it is or what is important. It’s much more ‘Hey, here is how I see things,’ and then allowing the other men to bounce off and share their ideas as well.”

Prior to production, Baldoni and his team held many focus groups of both men and women to get their reactions on the idea. What he found is that the show appealed to all genders.

“We found that men really want to watch this show, but they’re a lot less likely to post about it or share it because it’s a more private thing [due to] embarrassment,” he explains. This embarrassment roots in the fear of being labeled feminine or “unmanly.”

But, he adds that the show is appealing to women because it helps them understand men in a new way. Women are also likelier to share it on social media.

Incidentally, the first episode of Man Enough will discuss why men are afraid to communicate and ask for help. The second episode will focus on body dysmorphia and the fact that it affects men just as it does women.

“[Body image] are two words you never hear a man say,” Baldoni observes. “He might feel it, but you’re never going to hear a man say it. Body dysmorphia is rampant right now in men and it’s growing with the fact that now all these young kids have to have a six-pack or an eight-pack to get the girl.”

Baldoni has spoken out before about his personal struggle with body image and dysmorphia, though many view him as having a “perfect body.” On an Instagram post in June, he explained this further, writing, “Muscles don’t give you anything except the insecurity & desire of keeping them & making them bigger…The truth is that I’m one of the many millions of men & women that have body dysmorphia. When I look in the mirror I’m not happy with what I see like so many of you.”

#bodyimage Two words you've probably never heard come out of a man's mouth. I would bet that most of us assume that women are the only ones who struggle with their body image & feelings of low self-esteem. That assumption couldn't be more wrong. As a man I can tell you right now that I struggle with my own body image & there are infinite layers that contribute to why. I grew up really skinny. I always felt like my T-shirts just hung from my neck because I had no shoulders. I wanted to have muscles because I thought that would make me a real man. I thought it would help me get friends & girls & be respected. I was wrong. Muscles don't give you anything except the insecurity & desire of keeping them & making them bigger. I don't think we have ever addressed the underlying reason why most of us really go to the gym & stay in shape. Why do we sacrifice eating the foods we want to eat, while spending hours, working on parts of our bodies that most people will never see. Pushing ourselves, sweating, buying billions of dollars in products & clothing that hide our problem areas well following influencers who spend their entire day in the gym posting about it and make $ off our secret jealousy. What does that say about how we feel about ourselves? Does it really inspire us or does it set an unrealistic expectation for ourselves & our partners? The truth is that I'm one of the many millions of men & women that have body dysmorphia. When I look in the mirror I'm not happy with what I see like so many of you. Yes of course you can all say what you want about me - but nothing you say can make the little Justin who was picked on, who felt weak and like he wasn't enough feel amazing about how he looks. So to my dear friends… be patient with yourself. Love yourself, & be OK having insecurities. To my men, talking about your insecurities doesn't make you less of a man ... it actually makes you more of a man. We all have different reasons why we want to look the way we want to look... I just think it's important we start being real about it -because our children are going to grow up not just just looking at us but wanting to be like us. #TheMensRoom #redefinemasculinity

Since the birth of his daughter Maiya, Baldoni has been very open on social media about topics such as fatherhood, feminism, immigration, his own downfalls, and, of course, masculinity. He explains that he puts much consideration and thought into each post, having seen how impactful each one can be.

“Over the years I’ve received a lot of deeply personal messages through social media… and even a few from individuals who say that because of a post they read or video they saw us create made the choice to not end their life,” he says. “Look, if there is even one life still here on this planet because of something that came through me, that I then posted or made a video about on my social channels, then continuing to use my platform in this way is the least I could do.”

He hopes to translate that level of connectivity to Man Enough. “If you can think of it, we want to talk about it,” he says of the forthcoming show. And, for what it’s worth, Baldoni and his team believe there are tons of men out there who are ready and willing to be part of the conversation — and plenty others who are ready to listen.

While you wait for Man Enough to premiere in November, you can catch Baldoni on season four of Jane the Virgin, which drops October 13.

What do you think of the Man Enough concept? Tell us @BritandCo!