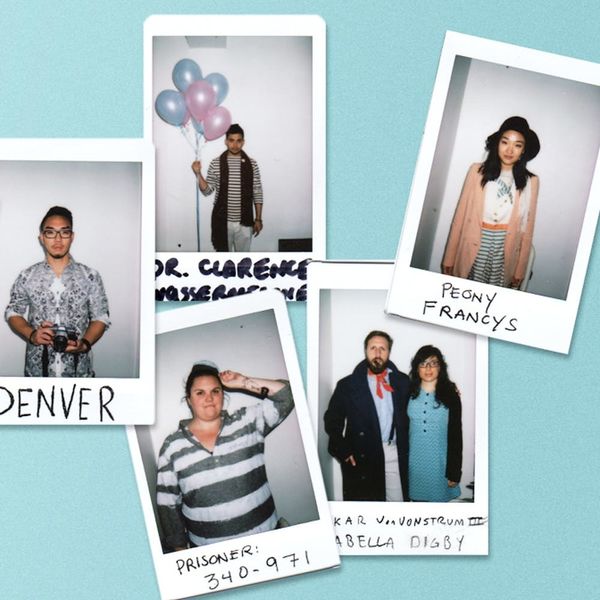 Wes Anderson’s characters inspired us so much for Halloween that we wanted to see how the imaginative director translated for other holidays too — like any old Saturday. Using Wes as our muse, my friends and I decided to throw a themed party and invite guests to really get into the spirit. Here are the easy steps to throwing a Wes party of your own. Halloween or not.

Wes loves stationery. My friend and co-host Ashley (dressed as Faustine) used our feline friend as our invitation header, as well as the main host, for the invitations. We used a typeface normally found on a typewriter to portray Anderson’s signature vintage-pastel aesthetic. We mailed the invitations to each guest in a pink envelope. In Moonrise Kingdom, Sam and Suzy plotted their affair with personal hand-written letters. Including your handwriting on the invitation would not only be very appropriate, it would also be very personal!

We invited our guests to dress as their fave character or create an original. The essentials for any Wes Anderson costume are vintage styling, a pop of color and a prop. My friends and I took turns taking Polaroid photos of each other and had everyone write down their character’s name. Chartreuce Malone was inspired by Cate Blanchett’s character in The Life Aquatic With Steve Zissou, while my friend Danielle got her inspiration form the prisoners in The Grand Budapest Hotel.

We decided to keep it light and focus on simpler items. We took direct inspiration from The Grand Budapest Hotel and invited our own Fraulein Mendl to make the famous cream puffs. With that being our centerpoint, we paired it with charcuterie. For the birthday cake, Ashley/Faustine and I decided to stick to the rustic baker theme and do a two-layer cake with raspberry jam and custard filling topped with sugar-frosted strawberries and raspberries.

For decorations, we kept with the same color palette: pink and blue. Hand-cut letters are appropriate for any Anderson film. Add a cluster of awkwardly placed balloons and you’re ready to go. Remember that Wes doesn’t over clutter the background in his films. Everything is symmetrical! For your party, try a matching pair of aquatic posters to reference The Life Aquatic or even in a patterned wall backdrop for a photo op for your guests. For a cool pattern, check out the Louis Vuitton Monogrammed luggage set from Darjeeling Limited.

Follow these easy steps to creating your party and you can’t go wrong!

Which movie or director would be your party-planning muse? Let us know in the comments below!

Dustin Soriano
Dustin is a photographer by profession, but a DIYer at heart. When it comes to DIY, Dustin is known to stay on the simple side, in both execution and design. On his off time, he enjoys singing in public, water color painting and devouring Korean food.
Halloween
Party
Halloween Vintage