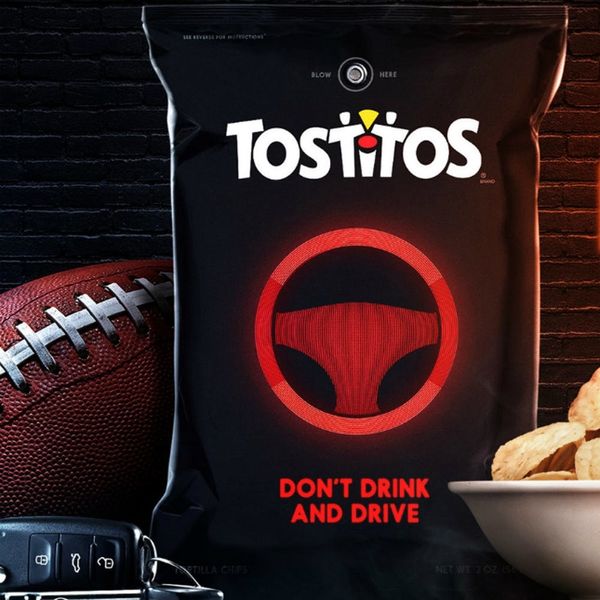 Even though it’s 2017 and most people really should know better, drinking and driving is still something that happens. With Super Bowl weekend upon us, you can be sure that some people may not be making the best decisions after having too much to drink. While most of us will be waiting for Lady Gaga’s politically charged halftime show, and will be watching the commercials more closely than the game, we definitely want to make sure we get home safely. And, surprisingly, Tostitos wants that for us too. Yep. Your nachos want you to be safe this Super Bowl Sunday and not drink and drive.

According to the company’s party-friendly website, Super Bowl Sunday usually sees a spike in traffic accidents caused by drunk drivers trying to make their way home from various parties. Together with MADD (Mothers Against Drunk Driving), the company came up with a pretty fun solution — the Party Safe Bag. This bag is essentially full of chips and has a little breathalyzer in it, so before you go home, you can see if it’s safe to do so. A green glow means you’re good to go, but a red one means you should take a cab.

What happens if you blow red, though? Well, Tostitos and MADD have that figured out too. They’ve partnered with Uber to provide 25,000 people with a $10 Uber discount by entering the last four digits of their bag’s UPC code. And since Uber’s CEO Travis Kalanick has now pulled out of working with Donald Trump in support of people affected by the travel ban, you don’t have to worry about giving your money to the company if that was something that upset you.

This is some pretty smart community activism, and since, according to Tostitos, last year’s Super Bowl had 45 drunk driving fatalities across the country (directly after game time, that is), these party-safe bags will hopefully get that number down much lower, maybe even to zero.

What are your plans for Super Bowl Sunday? Tell us @BritandCo!

Kat Armstrong
Kat has been a writer, social media maven and mom for longer than she's willing to admit. She's also spent time in front of and behind the camera, interviewing celebs, politicians and acting as a producer for fashion and artistic photography shoots. When she isn't writing for various orgs and publications, she's hanging with her kids, husband and French Bulldog, Peter, in Toronto, Canada.
Super Bowl
Food News
Super Bowl
The Conversation
More From Food News