These Inauguration Attendees Tell Us Why They Showed Up for Trump 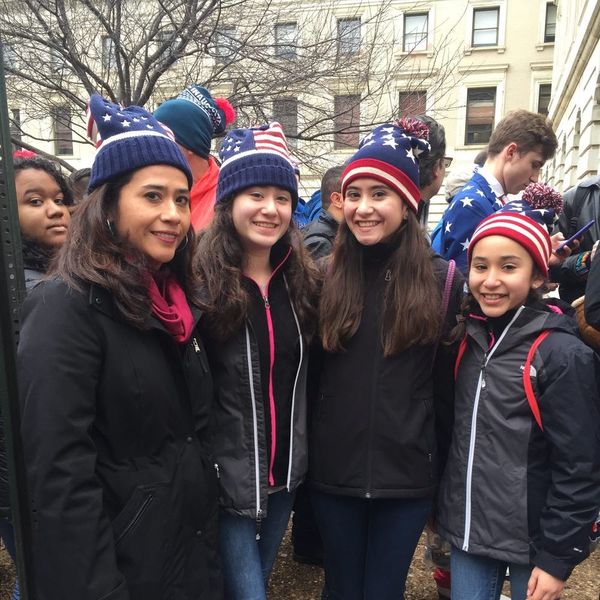 Today is the inauguration of the 45th President of the United States and, for better or worse, it seems that Washington DC will never be the same. With talks of protests, marches and galas galore, it can be assumed that the streets of our nation’s capitol would be swarmed with chaos. We took to the streets to sneak a glimpse at the crowd and get the lowdown on who turned up for the Donald. We found more than a few friendly faces who were happy to tell us why they chose to brave the cold, tackle the lines and chat with strangers to get a taste of history.

Why She Came: “It’s a wonderful experience to see the entire republic come together. I just want to represent the great state of Iowa any chance I can.”

Why She Came: “It was my first time voting, so I decided to come and witness history. I watched all the debates and I knew who I wanted to vote for. I’m the president of the Young Republicans club and we were out campaigning on election day. I find that people here today are here for the right reasons so I am very very happy.”

Why They Came: Diana — “It’s historical. We just wanted to be part of something that is going to go down in history. This might be the last time we can ever say we came to an inauguration.” Ariana — “People are really passionate so we have gotten to see so many viewpoints. But overall people are being respectful, which is nice. We just want to see what is going on and then tell people we were here.”

Why She Came: “I am here to witness an inauguration, which is really important politically. But I also don’t agree with Trump’s policies or politics so I am here to show myself as someone who is totally at odds with his views.”

Why They Came: Mya — “We kinda had to — this is a school trip. We’ve been watching the news and doing our research. DC has a nice atmosphere, but we feel a little bit of tension between the more liberal people and conservative people. It makes sense I guess. I mean a lot of people were disappointed.” Nia — “But the tension isn’t being addressed really. Everyone is just kind of minding their own business. People have signs and stuff but we are all just keeping to ourselves — especially us. This is like a tourist stop for us.”

Why She Came: “This is the first time I voted, so I wanted to come out and support him. Overall, it has been really positive. I don’t think there are many anti-Trump protestors so it is a lot cooler than I was expecting it to be. I just came here to be with my mom.”

Why She Came: “I came for the women’s march tomorrow. Honestly, I am just trying to get through to the museums right now and got caught up in this circus. I just want to be a tourist today.”

Why She Came: “I am here for the march. We were with a group who went to Obama’s inauguration and they said it felt like one big party. The mood has been subdued. People don’t seem happy or upbeat really. I’m ready to protest.”

Why She Came: “I started coming with my dad as a tradition starting with President Reagan. I love seeing all the pomp and circumstance. Inaugurations always give me a sense of how people are feeling after the election. This one had way fewer people than President Obama’s first inauguration and was really quiet, which was quite a contrast.”

Why They Came: “We came in yesterday and we leave tonight. It’s really exciting. We have never been old enough to come to one of these. We want to see some great change in the future and we think he can definitely deliver.”

Why She Came: “I am here with a class and it has been great to see them so engaged. They are far more engaged than any class I have had before them. They are studying the election and history and how it all connects. I have an older child who is now in college and when I think about his level of engagement and theirs — it is so different and so much better. They knew more about the issues. Whether they find them right or wrong they are willing to question it. They are willing to stand up for what they believe in and, more importantly, they are willing to stand up to bullies. That is the good part of the change. Unfortunately, they are also wondering why we are taking these steps back.”

Why He Came: “I was actually signed up for this before we knew that Trump won. I just think this is going to a great trip. We’ve seen a bunch of protests with my class so that was cool. I’m actually a Clinton supporter, but this is interesting to see up close.”

There’s hope for the future yet!

Want more info on the inauguration and Women’s March? Tag us @BritandCo and on Instagram with the hashtag #britstagram and follow us on Pinterest for more feminine-spiration.