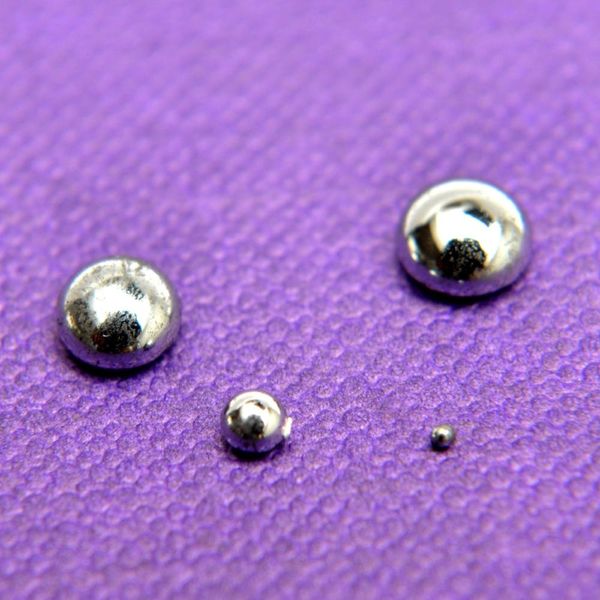 If your ideal Halloween involves gruesomely gory tales, trust us when we say there’s no topic more frightening than historical medical treatments. Back when medicine was closer to guesswork than science, if the ailment didn’t kill you, it was a toss-up whether the cure would. You might think ghost stories are scary now, but here’s a selection of five medical treatments guaranteed to make you shudder.

1. Take mercury for eternal life. It’s easy to see why people around the world were fascinated with shiny, silvery mercury, which is one of two metals that is liquid at room temperature (77° F). We know today that, although there are often small amounts of mercury in foods like fish, consuming a lot of it (or inhaling mercury vapor) can have severe neurological consequences and eventually cause renal failure. In China starting from the second century, mercury was used in the preparation of elixirs meant to guarantee eternal life. Some of their biggest fans were early emperors, who believed that ingesting the potions could enable them to maintain power forever. Instead, at least four likely died as a result of taking these highly toxic “medicines.”

Unfortunately, people’s fixation with mercury’s potential healing properties didn’t die in ancient China (and you can still find small amounts of cinnabar in some Chinese medicines today). Some people realized it was toxic when they noticed that workers in mercury mines would often exhibit strange behavior and die shortly after; yet from the early 16th century until 1910, mercury was used (probably unsuccessfully) to treat the growing number of syphilis patients. Perhaps the most famous user of mercury was Abraham Lincoln, who took a mercury-containing medicine called “blue mass” for “melancholy,” which we today would probably call clinical depression. Fortunately, he apparently recognized the negative effects it was having and stopped taking the medication shortly after his inauguration.

2. Drink radium water to cure angina, anemia, menopause, and more! The radioactive element radium was discovered in 1898 by Marie and Pierre Curie, and soon newspaper articles were excitedly discussing it as a cure-all. This hype led to quacks quickly churning out products that claimed to contain radium, including various brands of radium water, which supposedly contained particles of radium, or water-filled vessels lined with radium that would pass into the liquid. Manufacturers promised that their products would cure an impressive list of diseases, including appendicitis, arthritis, paralysis, liver disorders, high blood pressure, and diabetes. In 1926, the Department of Agriculture’s Bureau of Chemistry warned consumers that 95 percent of these products actually contained no radium (which we now know is a good thing) and that the healing properties of the remaining five percent were often exaggerated.

Radium’s time as a health fad was short-lived. In 1925, The New York Times reported that five women had died from “radium necrosis,” i.e., a disintegrating jaw caused by radium. They’d all worked decorating watch dials and instrument panels with radium paint so they would glow in the dark — and had been instructed to use their lips to keep the bristles straight for the precision work. This case combined with the Great Depression to cause radium products to fall out of fashion in the 1930s, and the 1938 Federal Food, Drug, and Cosmetic Act outlawed the marketing of radium products as medicines.

3. Bathe in rose water or gold to cure the Black Death. It’s a dramatic name for a dramatic event: The Black Death refers to a particularly devastating outbreak of bubonic plague that occurred from roughly 1347 to 1351, likely starting in Mongolia in the 1330s and then spreading through Asia, Europe, and North Africa along trade routes. Victims developed large black boils known as buboes that oozed pus and blood; the disease quickly escalated into fever, vomiting, diarrhea, terrible pain, and frequently death. The prevailing medical theory was that disease was caused and passed along by “bad air,” so physicians focused on trying to purify it, telling people to burn heavily scented woods like rosemary, vine, and ash, and to travel with a “smelling apple.” In addition, doctors recommended bathing in gold, which was thought to contain power from the sun that could counter poison; you could also use rose water if a gold bath was outside your budget.

Today we know that the plague was passed on by bites from infected fleas and rats, as well as through the air (so they weren’t totally wrong). Unfortunately, none of the supposed cures worked: It may only have been voluntary quarantines that eventually stopped the spread of the disease. The Black Death was one of many incidents of bubonic plague throughout history (the last serious outbreak was in the Democratic Republic of Congo in 2006), but by the time it was over, 25 million Europeans had died (anywhere from 30 to 50 percent of the total population), and the Middle East had lost a third of its population.

4. Balance your humors with bloodletting. Another prevailing medical theory among European doctors in the 1300s (and codified by Greek philosophers a millennium before that) was that the body was made up of four humors: blood, phlegm, black bile, and yellow bile. Any illness was the result of having too much or too little of one of these. To fix that imbalance, your doctor (or possibly a monk or barber) might use a specialized fixed-blade device called a fleam to make a small incision into a vein and let out some of your blood. Alternatively, they could set leeches on you. The vein they picked and the amount they “let” depended on your illness. Once you were done, the doctor would then wipe the blade down with the same cloth they used for everyone else.

As you can imagine, this often did more harm than good. George Washington, a proponent of bloodletting, asked his physicians for the service when he woke up with a sore throat on December 13, 1799. They apparently drained five to seven pints over the next 16 hours; when Washington died on December 17, it was speculated that maybe the massive loss of blood had been a bad idea. Although the practice of bloodletting mostly died out in the 1800s, it’s still used for some conditions today, and leeches have been brought back into the field of microsurgery.

5. Kill a slug to get rid of warts. This last one is less dangerous to humans… but fatal to terrestrial invertebrates. Records show that warts have been popping up on people since Ancient Greece. The methods hatched up to deal with them often read more like superstition than medicine. For example, an English myth recommended stealing a piece of meat, rubbing it on the wart, and burying it, so that as the meat rots it takes the wart with it. This slug variation, also from England, is similar: You have to go out on your own, find a big black slug, rub it on your wart, and impale it on a thorn. The warts are supposedly transferred to the slug, so as the slug dies, the warts die too. Other similar “remedies” said you had to do this nine nights in a row, and some accepted a snail as a substitute. Fortunately for all gastropods, we now know that warts are caused by a form of the human papillomavirus (HPV) entering the top layer of the skin and that they can be cured with over-the-counter treatments containing salicylic acid. (Put. The. Slug. Down.)

Do you have a gruesome historical “cure” to share? Gross us out @BritandCo.

Natasha Lavender
Natasha Lavender is a Londoner living in Chicago, and is fluent in British and American. She writes about pop culture, health, lifestyle, feminism, fashion, and interviews with interesting people, and has previously worked for Good Housekeeping magazine, Buzzfeed, and Hello Giggles. She loves podcasts, running, reading, dogs and cats equally, and peanut butter anything.
Creativity
Health
Creativity Healthy Living
More From Health