Why Verona, Italy Truly Is the City of Love 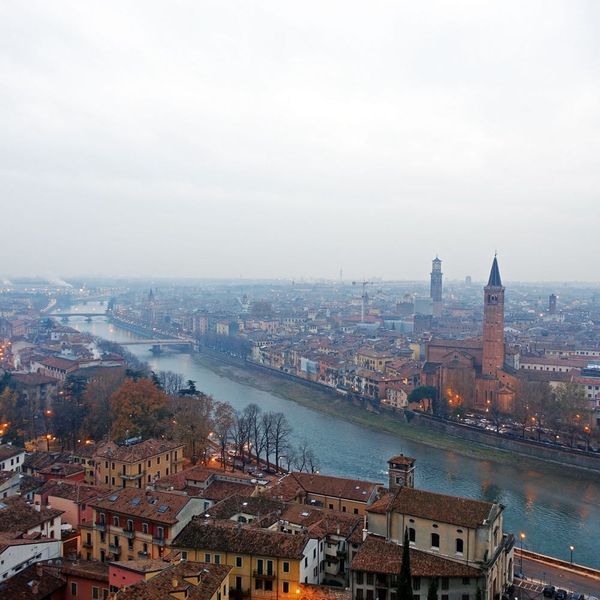 It’s hard not to fall head over heels with Verona. The idyllic northeastern Italian town was the setting for three of Shakespeare’s plays — the most famous of which, Romeo and Juliet, permanently sealed Verona’s reputation as The City of Love.

Verona is less crowded and touristy than its neighboring cities of Venice and Milan, which is part of its laid-back charm. But you’ll still find plenty of opportunities to stroll along the cobblestone streets, enjoy an aperitivo or two, marvel at some stunning architecture, and of course, get swept up by the air of romance that hangs over the city. Here are a few highlights.

There are a number of small hotels tucked away in the small streets of Verona. Palazzo Victoria is a luxurious respite in the heart of the city, located just off of the shopping street of Via Borsari near the Porta Borsari — an ancient Roman gate that once served as the city’s main entrance. The hotel is a unique blend of old and new: The interior and rooms are artfully modern, while the inner courtyard is traditionally Veronese. Near the lobby, you can also look down at the Roman ruins on which the hotel was built. (Photo via Palazzo Victoria)

For accommodations just outside the city, the Byblos Art Hotel Villa Amistà is part hotel, part art museum. The 17th-century rooms are filled with bright colors, plastic shapes, and contemporary art from around the world. If you want to get a sense of the clientele this hotel attracts, look no further than the Tesla charging station located on site.

A Roman city (ruins still lie six meters underground) with Austrian influences, Verona is best — and easily — explored by foot. Walk a few minutes in any direction, and it’s easy to stumble upon a picturesque plaza or a stunning historical building or landmark.

Italian piazzas are hubs for activity and socializing. The largest, Piazza Bra, where the arena and the town hall are located, is full of fairy-tale-colored buildings, cafes, and restaurants. Stroll down Via Borsari, and you’ll arrive at Piazza delle Erbe, originally a Roman forum and arguably the most gorgeous of the town’s plazas, flanked by ornate buildings and filled with local vendors selling snacks and trinkets. In the evenings, it’s an ideal spot to grab an aperitivo and people watch. Just off Piazza delle Erbe, you’ll find the smaller Piazza dei Signori, featuring a monument to the Italian poet Dante. Look up in the arched walkway between Erbe and Signori and you’ll spot a whale rib hanging from an iron chain, believed to have been there since at least the 1700s. Legend has it that it will fall on the first just person to walk underneath it. (It’s still hanging.)

Beyond street fairs, if it’s retail therapy you’re after, head to the main shopping street, Via Mazzini, which has everything from high-end designer stores to more budget-friendly staples like Zara and H&M. Wander along the pedestrian-only street and peruse the selection of clothes, shoes, and home goods.

One of the most impressive sites in the city is the Verona Arena, the third-largest Roman amphitheater in Italy. Built in the 1st century AD, it held up to 30,000 spectators during gladiator fights, and despite a 12th-century earthquake, it still remains largely intact. In the summer, the popular Arena Opera Festival hosts opera, ballet, and concert performances. During the winter, the arena showcases hundreds of nativity scenes flown in from around the world.

Verona is also home to numerous old and magnificent churches, many of them built using the city’s signature red marble. Highlights include the Gothic Basilica di Sant’Anastasia, the city’s largest church, decorated with elaborate frescoes inside; the red-and-white-striped Romanesque Duomo di Verona; and the Basilica San Zeno, named after the city’s patron saint and notable for the large rose window on its facade.

Further along the River Adige, you’ll find Castelvecchio, a medieval castle that was likely built on the site of a Roman fortress and served as the most important military construction in the Middle Ages. The square-shaped brick fortress is now a museum and gallery.

For a birds-eye view of the Verona, head to the top of Torre dei Lamberti, a 12th century, 84-meter-high watchtower with an octagonal bell tower. Another great vantage point is Castel San Pietro, a fortress on a tree-lined hill across the river, which gives you sweeping views of the entire city.

The most visited destinations in the city are, of course, related to love. Although Romeo and Juliet were fictional characters, the Montagues and Capulets were real feuding political families in Verona, and the city has fully leaned into celebrating the tale of star-crossed lovers. At Juliet’s house, the 13th century Casa di Giulietta on Via Cappello, visitors can walk into a small courtyard to rub a bronze Juliet statue for luck, gaze at the balcony where Romeo and Juliet declared their love for each another, or leave a note on the wall. The city actually receives so many love letters by mail — many addressed simply to Juliet, Verona — that there’s a volunteer organization of 45 secretaries, Juliet’s Club, that replies to thousands of lovesick people every year. Romeo’s house, close to Juliet’s, is a private medieval building marked by a simple plaque with a quote from Shakespeare engraved on it. And Juliet’s tomb is found below the former convent of San Francesco al Corso as a somber tribute to the heroine’s final days. While some may call them touristy, these places have taken on lives of their own, and even non-fans of Shakespeare come for a chance to believe in love again.

What to Eat and Drink

To fuel up like a proper local, grab an espresso at the bar at Caffe Borsari, a small and assuming coffee house that has been roasting delicious cups of coffee since 1969.

For something a little stronger, the Veneto region is also known for a number of wine varietals, including Amarone (red) and Soave (white). For the best and largest selection of wine in town, grab a seat at Antica Bottega Del Vino, located in one of the oldest parts of the city, where you can enjoy a taste from the extensive collection. The cavernous cellar holds a remarkable 18,000 bottles, the oldest of which is from 1840 and will set you back €50,000. (Photo via Antica Bottega Del Vino)

If there’s one food Italy is synonymous with, it’s pasta, and the country’s top fresh pasta brand, Giovanni Rana, had its humble start right in Verona. The company’s eponym, now 80, started making and selling fresh pasta door-to-door in 1962 to help a growing female workforce provide homemade pasta to their families in a fraction of the time it would take them to make it from scratch. Fast-forward 50 years, and the master pasta maker and his main factory are still cooking with fresh, high-quality ingredients in Verona — though on a slightly larger scale (~200 tons of filled pasta each day). Rana’s products are now found in restaurants and stores all over Europe and have even expanded into the US, and Rana himself is allegedly the second most recognized person in Italy, behind only the Pope (a true testament to the power of pasta).

For dining out in the city, there are plenty of good eats. The piazzas are full of food vendors if you want to nosh your way through the day or evening. La Taverna di Via Stella serves great authentic dishes and is just a stone’s throw from Juliet’s house. Locanda 4 Cuochi, by the arena, puts a twist on traditional Italian food. For dinner with a view, head to Osteria Ponte Pietra, located on a 2,000-year-old pedestrian stone bridge overlooking the river. After dinner, take a leisurely stroll through the charming streets (and maybe grab a scoop of gelato), and you’ll understand why Verona is fair, indeed.

Where’s your next vacation? Tag us in your travel pics on Instagram @BritandCo.