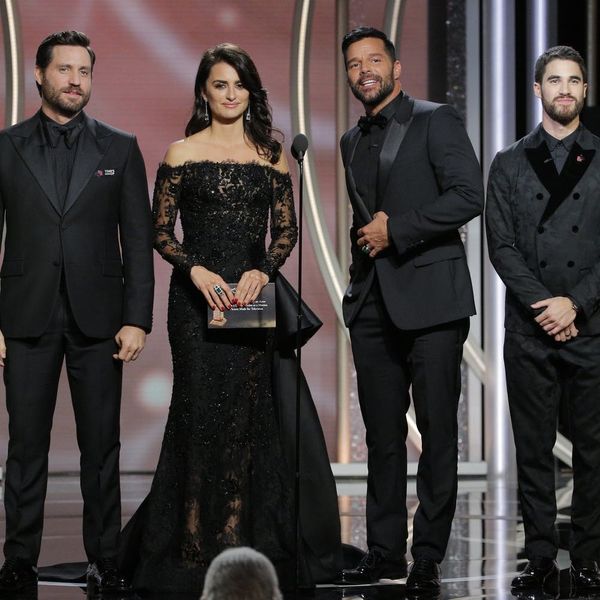 Though The Assassination of Gianni Versace: American Crime Story certainly looks compelling, you should also take the entire series with a grain of salt, according to the Versace family. When it comes to the show’s portrayal of the tragic events around Gianni’s death, they think fans should consider it a “work of fiction.”

Based on Maureen Orth’s book Vulgar Favors: Andrew Cunanan, Gianni Versace, and the Largest Failed Manhunt in US History, the FX show aims to tell the story around the murder of the celebrated fashion designer. The 50-year-old died on July 15, 1997, when he was shot and killed by Andrew Cunanan on the steps of his Miami Beach mansion as he returned home from a morning walk.

There’s been a lot of buzz around the series — especially given the success of season 1, The People v. OJ Simpson — but the family wants viewers to know that they’re not behind it. “The Versace family has neither authorized nor had any involvement whatsoever in the forthcoming TV series about the death of Mr. Gianni Versace,” they said in a statement to E! News. “Since Versace did not authorize the book on which it is partly based nor has it taken part in the writing of the screenplay, this TV series should only be considered as a work of fiction.”

Édgar Ramírez, who plays the main character, admitted to E! that he didn’t speak with anyone from the late designer’s family. “I had access to people who were very close to Gianni who were generous enough to open up to me and share their experiences with him. That was very helpful. … Not his family though, but people who were like family to him.”

Penélope Cruz, on the other hand, told Entertainment Weekly that she did talk with the family, and even met with the designer’s sister, Donatella Versace, before she accepted the role. “I did have one conversation that was between she and I. I don’t want to say the details, but it was a long conversation.”

Ryan Murphy, who is producing the show, also said that Donatella made a request regarding the script. “She didn’t want her children to be characters in the show or exploited, and I understood that, so we removed that element,” he told EW.

FX, for its part, is standing by the show, saying in a statement to The Hollywood Reporter: “Like the original American Crime Story series The People v. OJ Simpson, which was based on Jeffrey Toobin’s nonfiction bestseller The Run of His Life, FX’s follow-up The Assassination of Gianni Versace is based on Maureen Orth’s heavily researched and authenticated nonfiction bestseller Vulgar Favors, which examined the true life crime spree of Andrew Cunanan. We stand by the meticulous reporting of Ms. Orth.”

We’ll be able to see how true-to-life the series is (or isn’t) when The Assassination of Gianni Versace: American Crime Story premieres on Wednesday, January 17, at 10pm on FX.

What do you think about the fact that the Versace family says that the American Horror Story project is a “work of fiction”? Let us know @BritandCo!

Desiree O
Desirée O is a ‘Professional Bohemian’ who loves anything and everything related to the arts, entertainment, and pop culture. She ADORES being a ‘Newsy’ for Brit + Co, covering all of the latest tidbits of awesomeness that you want to read about. When she’s not writing, she’s either making messy art, going on long adventurous walks with her camera, or poking around over at bohemianizm (http://www.bohemianizm.com/). You can find out about Desirée O and her work at http://DesireeO.com/ or follow her on Twitter @DesireeO.
Controversy
TV
Controversy TV