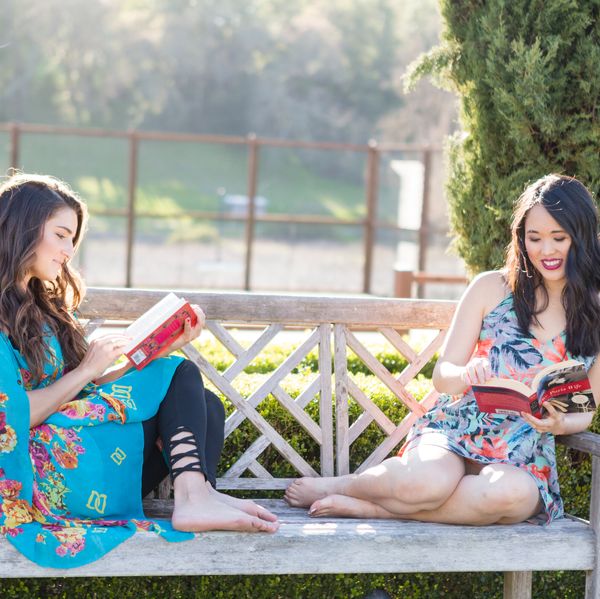 Since the pandemic hit, virtual meet-ups on Zoom and Google Hangouts have become the next big thing for staying connected. If you're meeting up with your book club virtually or want to start a virtual one this fall, here are 10 books that you and your gal pals will have lots to chat about. Mysterious, intriguing, heartwarming and hilarious, these great reads are the perfect accessory while staying home in your jammies!

The Best Part of Us by Sally Cole-Misch

As a child, Beth and her family enjoyed summers on a northern Canadian lake, experiencing a bond with not only family and friends, but nature as well. When that bond was ruined, the family had to leave, and now, 14 years later, Beth has a new life in Chicago. When her grandfather asks her to return to the lake to make some tough decisions, Beth wonders if she has it in her to go back to what once was.

Before She Was Helen by Caroline B. Cooney

A photograph Clemmie takes becomes an important clue in a crime scene in Before She Was Helen. Clemmie had taken the photo because of its artistic value, not knowing she was getting involved in a murder case. She has spent 50 years keeping secrets and hiding, and now one picture will quite possibly have the power to ruin her whole life.

Phoenix and Orchid are working together on a military project and as they get closer through work and travel, they fall in love. Orchid's past has been traumatic, and Phoenix is very protective. When Phoenix has an accident that changes him forever, will he burden Orchid with his own trauma, or let her go in order to save her from more pain?

Don't Look For Me by Wendy Walker

Molly Clarke is gone and the police are calling it a 'walk away' since her car was abandoned and there was a note at a nearby hotel. Her family is confused and shattered, and there are many questions that need to be answered. Did Molly leave on purpose in order to reinvent her life, or did something terrible happen? Don't Look For Me is a thrilling page-turner that will surprise readers up until the very end.

Truth of the Matter by Jamie Beck

Anne Sullivan returns home after a difficult divorce where she is hoping for a second chance for herself and her teen daughter. When she finds a vintage recipe box at her grandparents' home during a renovation, she is intrigued by the contents and the mystery of it. There are clues to her grandmother's hidden past and Anne wants answers, but her grandmother's memory is fading and Anne's struggling with the trust she had in her.

One Step Behind by Lauren North

Jenna, who is a wife, mom, and a doctor, is being stalked by a man and the police are not doing anything to help. Their house has been broken into, there are scary gifts left for her, and she knows he's just waiting. After months of torment, Jenna is shocked when her stalker is brought to the emergency room and goes into a coma. As his doctor now, she becomes obsessed with finding out more about this man who, by all standards, seems to be very normal. Will Jenna travel down a path that will lead to her own destruction in her quest to discover the truth?

The Aloha Spirit by Linda Ulleseit

It's 1922 in Honolulu and Dolores, who is sixteen, runs away. She meets and marries Manolo, but he drinks too much and is physically abusive. When Alberto, a relative of Manolo, comes to her aid, there is a spark that can't be ignored. Unable to divorce because of her religion, Dolores flees for California, and both men follow her. As she starts doubting her feelings for Alberto, Dolores must face some tough decisions if she is to find the "aloha spirit she has been seeking."

Grayson Sykes is put on the case of Isabel Lincoln, who is missing, but there are some things that are not adding up. Did Isabel leave on purpose? In this cat-and-mouse chase to find answers, Grayson starts to wonder if Isabel is trying very hard not to be found.

Don't Ever Forget by Matthew Farrell

When a police colleague is found dead near his car, detective Susan Adler is put on the case, teaming up with forensic investigator Liam Dwyer. The crime was caught on the dashboard cam of the murdered officer's car, and there are clues that connect this murder to two long-ago cold cases. As Susan and Liam search for answers, others will end up dead and Susan is in a frantic race to find the killer before he kills again.

Rent a Boyfriend by Gloria Chao

Chloe's traditional Asian parents are pressuring her to marry Hongbo, a wealthy young bachelor in their Asian American community, but she wants nothing to do with the slimy guy. In order to get her parents off her back, she hires Drew from Rent for Your 'Rents, a company that rents out fake boyfriends. Chloe doesn't know what to do when she starts to fall for Drew, who would never pass her parents' boyfriend requirements in real life.

What are you reading this fall? Share with us @BritandCo!

From Your Site Articles
Stephanie Elliot

Stephanie Elliot is the author of the young adult novel, Sad Perfect, which was inspired by her daughter's journey with ARFID, Avoidant/Restrictive Food Intake Disorder. She writes about parenting, mental health issues, relationships, and of course, books. An editor and advocate for authors, she lives in Scottsdale, Arizona with her family. For more info, visit www.stephanieelliot.com or www.stephanieeditorial.com.