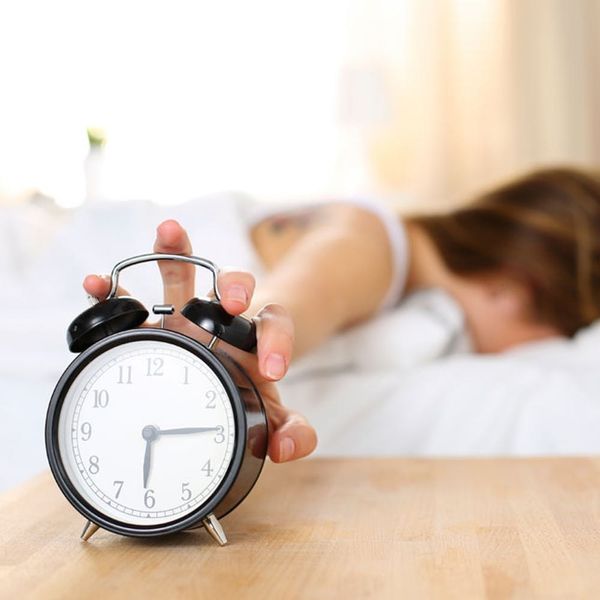 Desperate times call for desperate measures. With basically every waking minute accounted for, I hadn’t had any “me time” in months — and it was taking its toll. The stack of unread books by my bed just kept growing. My mind was foggy. I felt sluggish. And exercise? What’s exercise? A couple years back, an older, more experienced, healthier and more balanced mom friend told me she got up every day at 5am just to do things for herself. I was aghast. But recently, when an anxiety dream woke me up right before 5am, I felt like I shouldn’t fight it. I decided to join the 5am Club for a solid week, just to see.

Why 5am? I asked Jeff Sanders, host of the 5am Miracle Podcast and book of the same name. He’s a productivity guru, helping professionals “dominate the day before breakfast” and, generally, to re-engineer how we spend our time. “People think they have no time left,” he explains, “but there is time.” You just have to get up really early to capitalize on it, apparently.

One thing about 5am: It’s dark — really, really dark. Everyone I love is asleep. The birds of the neighborhood, I soon realized, were not — it’s a riot of various bird songs I’d never really noticed before. (Note to self: Google “birds of Los Angeles.”)

Since this was all somewhat spur of the moment, I didn’t have a particular game plan. Would I go running? Would I meditate? Would I write the Great American Novel? I just puttered in silence for an hour, checking in on the kids and my sleeping husband, clearing the detritus from a dinner party the night before and planning my day. That’s allowed, right? I watched the sun rise with a cup of coffee and tried not to check my phone. (Difficulty: moderate). I promised myself that the next day, I wouldn’t be so idle.

Day 2: Reading Books Is Better Than the News

I read for 40 minutes — and not just status updates on my phone. I read a real book with a hard cover that was just nominated for a big prize. I wouldn’t have to base my dinner party chit-chat on something I read in Slate or Salon. But I did still have 300-some pages to go.

There’s something incredibly settling about reading fiction instead of a stream of depressing/alarming/infuriating news headlines first thing in the morning. My perspective was slightly askew — in a good way. Instead of rolling my eyes about whatever nonsense the presidential candidates were spewing, I thought about this character’s life, his privilege, his secrets. It kept me engaged for the better part of the day.

I went for a power walk — the kind where you get your heart rate up and come home flushed and sweaty. I won’t lie, I was legitimately scared, even jumpy, because, per day one observations, it’s really, really dark at 5am.

People in my neighborhood walk a two-and-a-half-mile loop around a reservoir. After about 15 minutes of me looking over my shoulder, hypervigilant about all sounds, I started to see other human beings. First, a cute couple with an equally cute dog. They held coffee and walked briskly and made me feel safer.

Then there was a middle-aged woman pushing a stroller and pleading with her dog to stop sniffing every five minutes. She walked behind me and apparently knew everyone — the older Asian guy with salt-and-pepper flat top, the long and lean brunette with the long ponytail. Seems an unofficial 5am club pre-dated me, made up of a mish-mosh of my never-seen-before neighbors. People of all ages, shapes, ethnicities and sizes. As the sun rose and day broke, I had the thought: These are my people.

Yoga. Seriously, I haven’t done yoga since I was pregnant with my first child. The long stretches soothed sore muscles from the day before. I was (upsettingly) stiffer than before, but still (surprisingly) strong. I also sent a 5:43am email to a friend, to which she later replied, “My, my, you are up early my friend!” I smirked to myself, proud.

I decided to walk again, as it seemed to have the most positive impact on the rest of my day — and on my overall commitment to The Club. That’s no accident, per Sanders. “I find if I wake up every day, early, and work out, it takes about three to four days to adjust,” he explains. “Plus, I’ve worked out, and I feel better, healthier.” He also suggested that cutting back on caffeine for a few days helps — but for a coffee fiend like myself, that’s just crazy talk.

This time I wasn’t a paranoid mess walking in the dark. I saw some familiar faces and nodded hello. Funny how quickly you can feel a part of something. Halfway around the lake, day broke. The birds took flight across the reservoir. More people joined the path. I trudged up the hill to my house and I felt truly invigorated.

Day 6: Too Cold to Walk? Time to Meditate

So not only is it really dark at 5am, but it’s also cold. I briefly considered putting on my running shoes once again, then wussed out. Today, I thought, I will (try to) meditate. It’s not often that I get to just… be.

It was hard to quiet my brain. About 10 minutes in, I silently berated myself for not taking that free meditation course with my friend. But then I relented, thinking that even the mind-wandering could be good for me. Was it productive? Hard to say. But I’m a firm believer that daydreaming has its place, and I hadn’t done it in ages.

I’ll admit it: Consistency is not one of my strong points. I hit snooze. I stayed in bed for another 30 minutes because… the dark! the cold! Plus, a certain child crawled into bed, and wasn’t snuggling just too delicious?

I think, though, it’s this: When the clock still reads 5-something, I’m tired. The pull of exercise and me-time strained against the push of another 30 or 60 minutes of sleep.

When I asked Sanders what I could have done differently, he explained that there are two paths to 5am. You can take the masochistic route, which is what I did — cold turkey, you start waking up at 5 am. Or you can ease into it, waking up 15 minutes earlier over the course of days or weeks, until it feels more natural. “If you drag out the process, it sticks longer,” he says. “It’s more effective in the long term.”

I sighed: Okay, baby steps. But as I look back on my week, I felt strength in my legs, I felt clarity in my mind and I felt… a little bit more like myself. And that’s something no snooze button should be able to take away from me.

How far are you willing to go for some me-time? Do you belong to the 5am club? Tweet us @BritandCo and let us know!