Why Michelle Obama’s Farewell Speech Dress Was So Meaningful 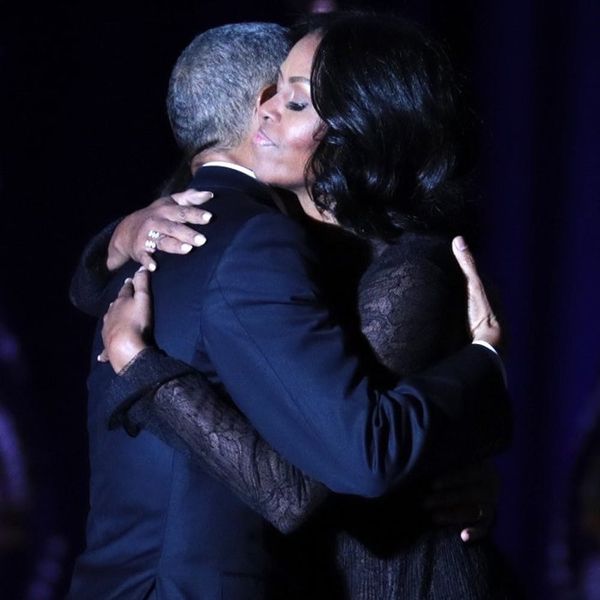 Two days after their star-studded farewell bash at the White House, President Barack Obama gave his farewell speech at McCormick Place in Chicago just a few short miles from Grant Park, where he held his victory rally after winning the office in 2008. He ended his final address to the American public by coming full circle with the motto that became emblematic of his campaign, “Yes we can.” The president wasn’t the only one who made a nod to the past: FLOTUS Michelle Obama looked to 2008 for sartorial inspiration that held a deeper meaning.

Nothing Michelle Obama wears is ever a mistake — and her outfit that night was more meaningful than what can be gleaned by the naked eye. She supported her husband in a navy Jason Wu dress with long sleeves and all-over illusion lace, and she looked resplendent, but it’s the designer pick that was significant. After all, it’s not the first time the Taiwanese-Canadian-American designer has dressed the First Lady.

She wore his designs throughout President Obama’s presidential campaign in 2008, but most importantly, for her husband’s first inaugural ball. For that, she donned a breathtaking custom-design by Jason: a one-shoulder white chiffon gown embellished with hand-stitched organza flowers and Swarovski crystals. The gown was such an art piece, it was exhibited at the Smithsonian.

And after Barack Obama was re-elected four years later, once again our First Lady turned to the designer. This time, she chose a halter-neck ruby-red frock in chiffon with shimmering velvet details. Throughout her time in the public eye, she’s worn Jason Wu at least 11 times.

Therefore, it’s no surprise that Michelle Obama turned to the New York-based designer again for the last public address by her husband. After all, that night was about endings. And it was about beginnings too.

What do you think about FLOTUS’ sartorial choice? Tweet us @BritandCo!

Kimberly Wang
Kimberly Wang writes about all things pop culture, tech, style, and beauty. She's a Bay Area transplant and has an MFA in Creative Writing from Columbia University. On a sunny New York day, you can find her hanging out with her mini schnauzer Isabelle Jellybean on a blanket in Central Park.
Celebrity Style
Style News
Celebrity Style Politics
More From Style News