Why These Clinic Escorts Risk Their Safety to Protect Other Women 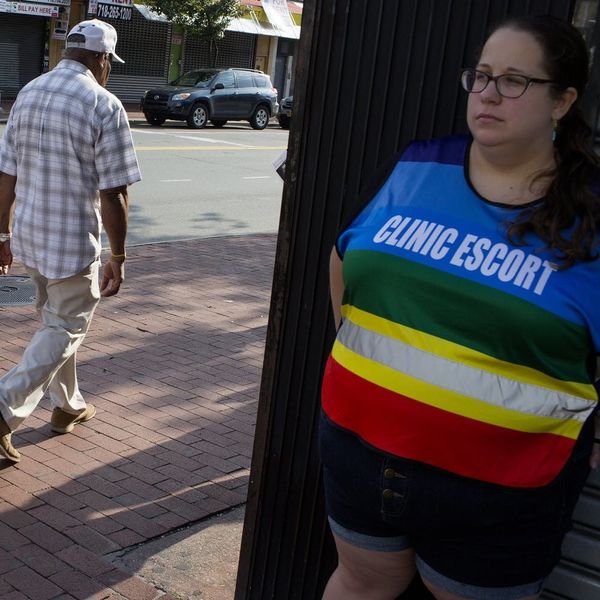 In July, a judge in New York ruled that the behavior of a group of anti-abortion protesters outside of the Choices Women’s Medical Center in Jamaica, Queens, a women’s health clinic that provides abortion services, does not constitute harassment.

According to Judge Carol Bagley Amon, the June 2017 lawsuit filed by former New York Attorney General Eric Schneiderman “failed to show” that 13 protesters “had the intent to harass, annoy, or alarm” patients, volunteers or companions supporting them, and doctors entering the clinic — although Amon noted in her ruling that “several of the defendants’ actions came close to crossing the line.”

Amon’s ruling predictably sparked controversy among pro-choice advocates, particularly doctors, patients, and volunteers who have long experienced harassment and intimidation tactics by anti-abortion protesters firsthand. And yet, the ruling was not an anomaly. In fact, threatening or invasive behaviors by protesters outside women’s health clinics are so prevalent that they gave rise to a support system known as clinic escorting, which entails volunteers putting their own safety on the line to accompany patients as they enter clinics.

“the law of the state and protesters can almost work together against us.”

Clinic escorts provide support and a buffer zone between patients and protesters. They also stand outside clinics to de-escalate hostile situations that may arise between protesters and community members or companions of patients. Their brave work — and the forces that create the need for their work — remains too-frequently dismissed or erased altogether by court decisions and laws that often fail to adequately protect clinics from harassment, and even violence, in the first place.

“It literally would take anyone coming and standing across the street from a clinic where there’s protesters to understand how psychologically and physically dangerous they make it, just to go in a place where people are trying to get health care,” says Sonya Mendoza, the volunteer coordinator of clinic escort group LA for Choice. “I’ve never been to that clinic in Queens, but the judge could certainly stand outside a Downey clinic for five minutes and see it’s harassment.”

Mendoza has volunteered as a clinic escort since 2005. At that time, she was located in Washington, DC, where the anti-abortion March for Life hosts its massive annual rallies. Since 2015, she’s worked with LA for Choice to support an abortion clinic in Downey, California, just outside Los Angeles, where every Saturday anywhere from 10 to 20 protesters show up with speakers, karaoke equipment, rosaries, and graphic signs.

The bulk of what protesters do is make noise, but Mendoza says one local pastor who protests at the clinic every week will often touch patients’ shoulders or stand over them. She also says that another regular protester has previously followed a clinic escort to their car, leading LA for Choice to instate a clinic escort buddy system, and threatened to assault patients if they weren’t accompanied by escorts.

Mendoza recalls how the loud cheering of protesters at the Downey clinic served to exacerbate a tragic incident on New Years’ Eve last year, when police officers physically prevented a patient and her family from entering the clinic because of their car’s expired license plate and subsequently towed the car that the family had been living in. Because of the encounter with police, the patient was forced to miss her appointment.

“And when protesters cheered and got loud because of that, it really drove home how the law of the state and protesters can almost work together against us,” Mendoza says.

“We were able to get them there eventually.”

Since 2005, when she first started escorting, Mendoza tells us that the aggression of protesters “ebbs and flows,” especially with new federal and state laws. But based on her own experiences and those of other escorts across the country who share their stories in private Facebook groups, she feels protesters have become more emboldened since the 2016 federal election and increase in rhetoric likening abortion to murder.

Numerous studies certainly corroborate this sentiment, and NARAL Pro-Choice America notes that there has been a dramatic uptick in clinic violence since 2015 — a year before the election — when an anti-choice group released edited, illegally obtained videos from a Planned Parenthood clinic, which were marketed as proof the organization “sells baby parts.” The video’s creators have since been charged with 15 felonies, but not before later that year, a gunman claiming to be a “warrior for the babies” shot and killed three in a Colorado Planned Parenthood clinic.

Though violence from clinic protesters remains relatively infrequent, their tactics can be intimidating. In Louisville, Kentucky, Christine, a media liaison for the Louisville Clinic Escorts, tells Brit + Co that protesters show up to Kentucky’s last abortion clinic every morning Tuesday through Saturday. Their numbers range from approximately eight to 15 on weekdays, and 20 to 100 or more on Saturdays, she tells us.

Christine, who has served as a clinic escort since 2013, recalls how on Mother’s Day 2016, Operation Save America, a prominent fundamentalist Christian group, came to town just to target the clinic, sitting in front of the doors and blockading the building.

“Patients couldn’t access the clinic for a while,” Christine recalls, “but we were able to get them there eventually.”

Nilofar Ganjaie formerly worked as a field organizer and volunteer coordinator for Planned Parenthood of the Great Northwest and Hawaii. Ganjaie recalls how many training sessions and events at Planned Parenthood clinics or offices were regularly, vocally protested. At a training she attended in Colorado, she tells us that protesters brought ladders and speakers to be able to yell at patients and volunteers over a 12-foot fence.

“That really stayed with me,” she said. “I think it spoke to how, if there are laws limiting what anti-choice people can do, they find ways to work around them anyway.”

“It’s all about the client.”

Aidan Krainock became a clinic escort in Portland, Oregon shortly after seeing a documentary about the slain Kansas abortion provider Dr. George Tiller. She recalls how some of the worst tactics by protesters often targeted women of color; some protesters would approach Black patience and use rhetoric likening their abortions with “Black genocide,” while in one case, a pastor who regularly protested the clinic harassed a nurse who wore a hijab.

On other occasions, since the clinic was in a residential area and the pastor who led protests would arrive with loudspeakers as early as 7 am on Saturday mornings, residents would often come outside to confront him. “It would lead to loud, long philosophical arguments that never really went anywhere,” Krainock says.

Those loud, hostile arguments are exactly what clinic escorts are there to help diffuse.

“A general rule of thumb is, ‘do not engage,’ especially if a protester is hostile,” Ganjaie tells us. “You’re not going to reason with that person, you’re not going to convince someone yelling obscenities at you about abortions. That’s the reality. And further, we want to avoid [agitating] that person and creating a possibly unsafe situation.”

Rather, volunteers agree that escorting is about the comfort and safety of patients.

“Some people may want to engage or debate protesters, but what [we’re aiming] to do is to walk with clients, make space for them, empower them to make their own decisions,” Christine in Louisville says. “We ask permission — ‘Would you like me to walk with you?’ — because the antis [protesters] do not ask for permission. That’s how we differentiate ourselves. It’s all about the client.”

In 2012, Rebecca L. was escorted into an abortion clinic in Austin, Texas on three separate occasions for appointments leading up to her abortion, and the abortion itself. The numbers of protesters outside during each of her visits varied, although Rebecca recalls feeling relieved when there was only one protester outside for the follow-up visit after her abortion.

“There was a lot of loud prayer, a lot of yelling, and trying to get me to come over to them since they couldn’t step on the property legally,” she said. “They had pamphlets in their hands, and Bibles, rosaries, and really disturbing images.”

Since her experience being escorted, Rebecca has launched a nationwide “virtual clinic escort” project to counter harassment and misinformation from anti-abortion groups online. The “I Need An A” website helps virtually accompany women to find information for verified abortion clinics near where they live and intends to “shield” them from fake clinic websites and anti-choice social media users.

“Showing Up for People” Is “an act of Love.”

The escorts and patients we spoke with agree that Judge Amon’s ruling last month was out of sync with their lived experiences. But clinic escorts accept harassment as a part of their role — a role that was largely created in direct response to the harassment of protesters.

Sonya Mendoza of LA for Choice identifies as a veteran of the movement for reproductive justice. She’s been acutely aware for years of the hostility, vulgarity, and, too often, the danger that can come with volunteering — and she’s also aware of the often inadequate protections of state institutions, from the courts and law enforcement to lawmakers who use legislation to stigmatize and further obstruct abortion access.

But it’s never stopped her or clinic escorts across the country from showing up.

“As a person of privilege, a lot of being a good organizer and lifting up communities in a less fortunate position is through putting your physical body out there, even if that may mean out of safety zones, to show your support,” Mendoza says. “That’s really what clinic escorting is. It can be at times unsafe, but I do believe in my heart of hearts the physical aspect of showing up for people is not only an act of love, but is an act of community organizing.”