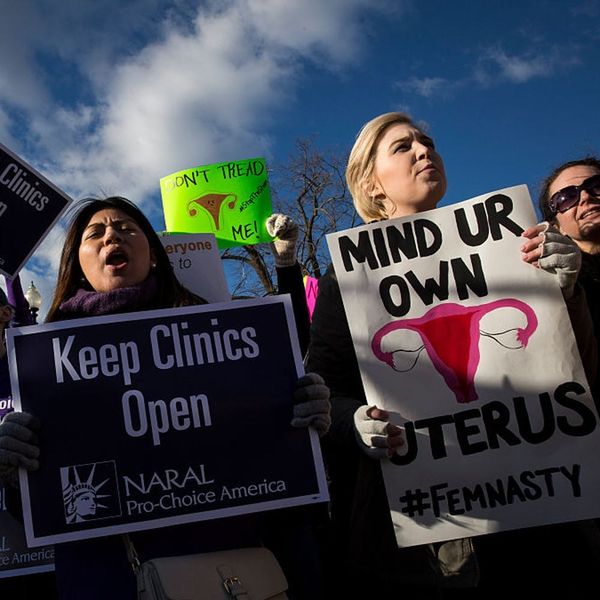 As a national fight both against and to protect abortion rights marches on, pro-choice activists in Kentucky are working to save the state’s last abortion clinic.

The EMW Women’s Surgical Center in Louisville, whose website states it is a state-licensed ambulatory gynecological surgical center (a reference to TRAP laws, which require abortion clinics to meet some of the same building standards as hospitals), is at risk of closing its doors, leaving women in Kentucky with no abortion clinics. Now that the clinic is the last standing, it is taking on considerable heat from anti-choice activists whose goal is to shut it down.

The clinic has been facing local opposition, and now a national anti-choice group, Operation Save America, has set their sights on closing the clinic as well. In recent days, a judge ordered protesters to refrain from crowding the front of the clinic’s exterior, but the group has no plans of ceasing their efforts. Protesters have said they will continue to picket the clinic, and even show up to doctors’ homes.

While abortion clinics around the country are accustomed to protesters, this recent swell of anti-choice activity comes as the state’s openly anti-abortion governor attempted to shut EMW down in March. A district judge issued a restraining order that kept the clinic open, but Bevin, the Republican-dominated state legislature, and anti-choice activists are not deterred. The governor insists that EMW has not adequately met state standards, threatening to pull the clinic’s license; EMW says they are up to code.

While EMW remains open, Kentucky hangs onto abortion access by a thread. Since the start of this year alone, the Kentucky legislature has adopted a measure that bans abortion after 20 weeks, and another that requires patients to have an ultrasound before the procedure, while health care providers describe the image if the woman chooses not to look, and plays audio of the fetal heartbeat. But even these laws will be rendered essentially moot if EMW is forced to close, and patients in Kentucky will have only a nominal right to choice.

“Kentucky women already face some of the country’s most severe restrictions on their reproductive health care. Closing the state’s last remaining clinic would make it even harder to access constitutionally protected health care,” a NARAL spokesperson tells us via email. “The fact is that seven in 10 Americans support keeping abortion legal and accessible. That’s not just a majority, it’s a consensus, and it’s as true in blue states as it is in red states. NARAL won’t stop calling out the politicians who put their fringe ideology ahead of the health and wellbeing of the Americans they were elected to represent.”

In the last several years, a few thousand abortions have been provided per year in Kentucky. In 2016, 3,430 abortions were performed in the state, which gives an idea of how many people are in need of abortion services each year, and how many women may lose any hope to get an affordable, legal abortion in the state.

In a prepared statement provided to Brit + Co, Brigitte Amiri, Senior Staff Attorney for the ACLU Reproductive Freedom Project says, “Women in Kentucky already face too many barriers to getting abortion care—and if the last clinic is closed it will amount to a ban on abortion in the state. Women with resources will be forced to travel out of state. Those without resources will have no choice but to carry their pregnancies to term.”

Amiri adds that what is happening in Kentucky is creating a ripple-effect for anti-choicers around the nation: “As if this situation weren’t difficult enough — anti-abortion extremists, emboldened by the prospect of ending legal abortion in Kentucky, are marshalling resources and out-of-state activists to stage a massive, disruptive action at EMW Women’s Surgical Center later this month which could threaten patient access to the clinic.”

Amiri also stated in May that Kentucky’s restrictive abortion measures created an “undue burden” on women seeking abortions, which makes the laws unconstitutional.

The stakes are high on both sides, but hope is not lost for the clinic. EMW assembled a legal team that is committed to keeping the clinic open, and has the support of national pro-choice groups like Planned Parenthood, NARAL, and the ACLU. However, there are no guarantees when it comes to reproductive care in this country, and in a state dominated by conservative politicians, the EMW still has a difficult fight.

What do you think about the fight over abortion in Kentucky? Tell us @Britandco.