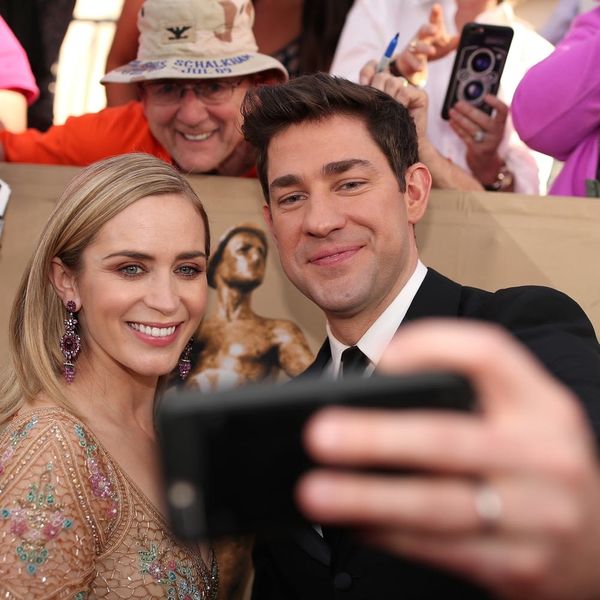 Emily Blunt (AKA the new Mary Poppins) and her hubby John Krasinski are undeniably one of Hollywood’s cutest couples. But now you can give the famous duo a run for their cute couple money IN PERSON by taking your girl/boyfriend on a double date with them. Yes, for real.

The pair has partnered with Omaze to offer fans the chance to go on a double date to the premiere of their upcoming horror flick, A Quiet Place. While the idea of hanging out with two A-listers might seem a little intimidating, Blunt and Krasinski sound rather thrilled about the date night in their promotional video to announce the offer.

Krasinski chimes in: “Do something with us! No friends!”

The video, which is definitely worth watching, features the pair making various attempts to tell you about the awesome chance to chill with them in a series of (almost certainly staged, but still charming) blooper cuts. The former Office star also tries debuting a “Brangelina”-style celebrity couple nickname for himself and his wife, which will have you laughing in spite of yourself.

If you’re just as eager about the idea of hanging with the couple as they seem to be, then be sure to donate at least $10 which will go to the Malala Fund, which strives to create a world where all girls can access a proper education. If you win, Omaze will fly you and your guest to New York City. There you’ll enjoy a stay at a four-star hotel along with an evening out for cocktails with Emily Blunt and John Kransinki before heading to the NYC premiere of A Quiet Place. And, yes, you’ll get the opportunity to pose for some red carpet pics! Afterward, you’ll get to join the stars for what will surely be a very lit afterparty.

If this sounds like the double date of your dreams, then donate to enter to win here.

Would you love to go on a double date with Emily Blunt and John Krasinski? Let us know @BritandCo!