You Can Totally DIY This Casually Glam Golden Globes Hairdo 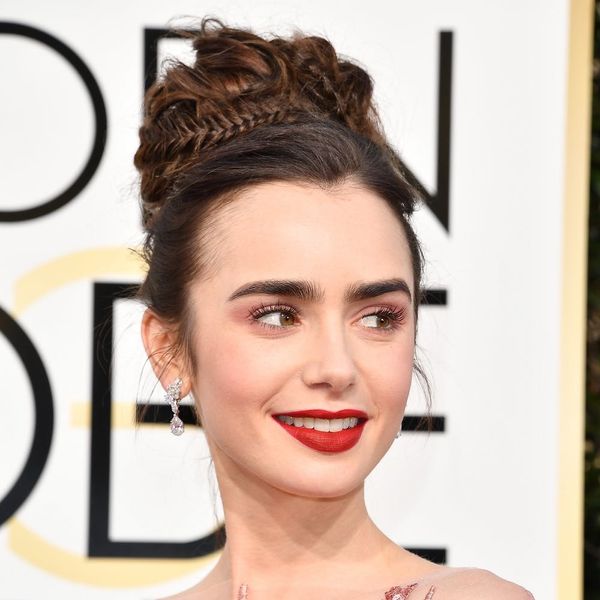 Now that we’ve seen the best looks of the 2017 Golden Globes, it’s time to focus our attention a little further North: We’re talking hair, people! While there was plenty of LLL’s to be seen, the looks that commanded our attention most evolved from the lazy-girl look we saw all over the AMAs — the topknot — with a twist. Starting further back at the crown than the traditional look and adding either loose wisps of hair like Goldie Hawn or intricate braids like Lily Collins, stars took the look up a notch while still keeping things totally doable for your everyday look. Read on to see who nailed it below.

1. Lily Collins: First and foremost was Lily Collins, who also incidentally took home our nod for best dressed. Adding intrigue with the addition of several braids to the front on her knot, Lily was an instant hair fave. (Photo via Frazer Harrison/Getty)

2. Goldie Hawn: Goldie proved you’re never to old to have fun with trends, rocking her messy top-knot with the best of them. She left her bangs and side fringe out of it, starting further back at her crown for an ultra-relaxed — yet still glam — feel. (Photo via Kevork Djansezian/Getty)

3. Maisie Williams: Maisie seemingly looked to classic Hollywood icons such as Audrey Hepburn for her red carpet inspo, clipping the pile of hair atop her head in place with a shiny old-school barette. (Photo via Frazer Harrison/Getty)

4. Liz Hernadez: Liz went halfsies on the trend, tucking just the upper back portion of her hair into the knot and letting the rest fall where it may. (Photo via Venturelli/Getty)

5. Elsa Pataky: Chris Hemsworth’s wife, stunning in Zuhair Murad, kept the focus on her dress with a simple, devil-may-care look on top. (Photo via Venturelli/Getty)

Nicole Briese
Nicole is the weekend editor for Brit + Co who loves bringing you all the latest buzz. When she's not busy typing away into the wee hours, you can usually find her canoodling with her fur babies, rooting around in a bookstore, or rocking out at a concert of some sort (Guns N' Roses forever!). Check out all her latest musings and past work at nicolebjean.com.
Celebrity Hair
Beauty News
Celebrity Hair Hair Trends Red Carpet